I Am the Shock Rat (Super Smash Bros. Brawl)

In this column, I don’t really review games. There are others on staff who are far more qualified for that task, mostly because they are actually willing to sit down and play a game all the way through. I have been known to do that from time to time. Mostly, though, I merely dabble, or else watch while someone else plays.

This was mostly the case with Super Smash Bros. Brawl. When it came out, my boyfriend attended the obligatory midnight release party and then ran out at 8:00 on a Sunday morning to pick up his own copy, thoroughly convinced that the local Best Buy would be sold out by the time he got there. The rest of the day was spent playing through story mode and cheering on the individual characters as they were (very dramatically) introduced. Once story mode was completed, he moved on to the minigames and other extras. And so it went long into the night. 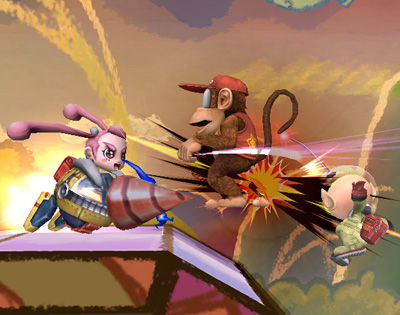 I didn’t actually get to play Smash Bros. myself until later, when my boyfriend had thoroughly exhausted the single player capabilities. He showed me how the controls worked and let me have a go. However, no amount of multiplayer coolness was going to convince me to try my newfound skills against him in a head-to-head death match. For one thing, I accept the fact that he is a better player than I could ever hope to be. For another, he’s kind of…competitive. Let’s just say it’s just best to avoid direct confrontations.

As a result, my opportunity to play actually came when my boyfriend and I went to a friend’s house to show off his newly acquired toy. Several of his buddies were there, and I agreed to join in a group game. My involvement came with a caveat, however. I knew damn well that even the worst player among his friends would still be far better than I was. I needed an extra advantage—a handicap, if you will—and in Smash Bros., there is one sure-fire way to get it.

Now, I should mention my boyfriend’s feelings about the shock rat, aka. Pikachu. According to my boyfriend (and, apparently, any other self-respecting gamer), using Pikachu is basically cheating. As far as I can tell, this is because Pikachu’s electric attack is so strong, you can whoop serious ass with almost no skill and/or effort required. To give you an idea of how irritating the shock rat is to hardcore gamers, I have included a (heavily censored) version of what my boyfriend has to say on the subject:

You get the idea.

Anyway, after a brief discussion involving an amusing blend of (his) cursing and (my) winning smiles, I was permitted to play as Pikachu. As a result, I did not acquit myself badly in the group game. Oh, I set records for the most times thrown off the stage, but somehow, it always seemed to balance itself out with the number of othercharacters I had taken with me. I ended up coming in second or third place for most of the timed battles. I even managed to snag a Smash Ball at one point, and got a Pikachu Super Smash, which was quite gratifying.

Alas, the glory that was Pikachu could not last. No one said anything, but I started to feel just the tiniest bit guilty. I knew that the reason I was doing so well wasn’t because I was a good player. And really, I figured, it’s got to be pretty damn frustrating when you keep sailing off the screen just because you happen to be standing directly above Pikachu at any given moment. How long would it be, I wondered, before they guys forgot what a terrible player I was and just came after me out of sheer rage?

At last, to avoid a purely hypothetical videogame thrashing, I voluntarily gave up the shock rat. My game immediately went south. As the matches continued, I tried a bunch of other characters, from Samus to Jigglypuff (yes, I did try Jigglypuff, and no, it did not go well). It just wasn’t the same. From that point on, I came in last place pretty routinely, which kind of took the fun out of playing. Still, I am glad I got to be the shock rat for a little while. It was well worth it for the sheer entertainment value if nothing else. I mean, hey, what kind of gamer girlfriend would I be if I didn’t stir up trouble every now and then?

Hah! I got you! I got you to click on this post, and now I'm going to show you something totally boring an–no, wait, wait a minute. That subject line isn't actually a lie? Check this out—you reall