Have you ever wanted to shoot eggs out of your butt? Get turned into a crocodile? Go on a mind-bending quest in order to complete a jigsaw puzzle? If your answer to all these questions is “yes”, then you have to get off your non-egg-shooting butt and start playing one the greatest N64 games ever: Banjo-Kazooie.

Yes, Banjo-Kazooie. Or, as I like to refer to it, Super Mario 64 without all the suck. For the next two months, I’ll be taking you readers on a magical journey in which I explain why this game is awesome, ten reasons at a time.

1. Shooting Eggs Out Your Butt 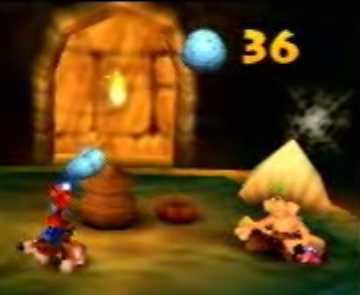 The N64 has a weird controller setup. The L-button is impossible to reach, there’s a d-pad that is used in a grand total of ZERO videogames, and four of its buttons—the C-buttons—are only ever used to control a game’s camera.

Banjo-Kazooie takes the C-buttons to another level by using them not only for the camera, but also for performing various moves. These moves include running on Kazooie’s legs, using a wing shield, and shooting eggs out of Kazooie’s butt. 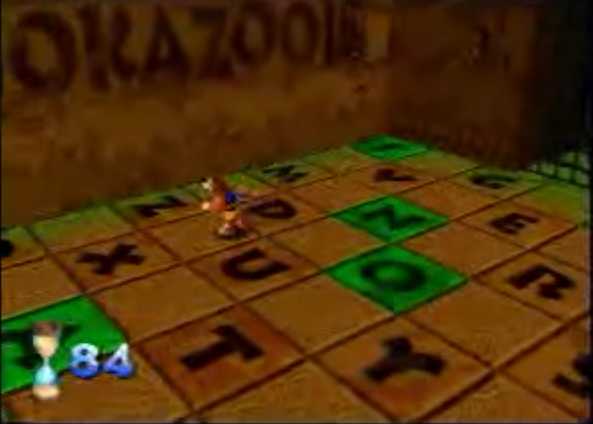 The sand castle in Treasure Trove is cool because it allows you to spell things out letter by letter. And by spelling things out, you can activate cheats like “give Banjo big feet” or “turn Banjo into a washing machine.”

But that’s not all! You can also activate cool cheats like “breathe underwater” or “infinite eggs” by spelling out secret phrases like “GIVE THE BEAR LOTS OF AIR” and “BANJO BEGS FOR PLENTY OF EGGS.” So not only do you spell out cheats, but you spell them out in verse.

Cheating in videogames while working on your poetry skills? You can’t get much better than that, folks! 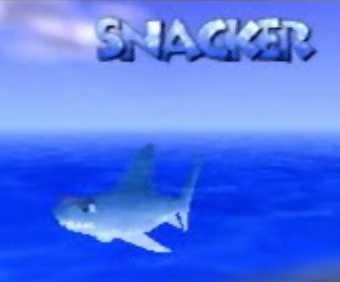 One of the bad guys in this game is Snacker the Shark, who has the greatest shark attack theme music I have ever heard. Forget the stuff they play in Jaws or the San Jose Sharks games, because Snacker’s theme is the best shark-themed music EVER. 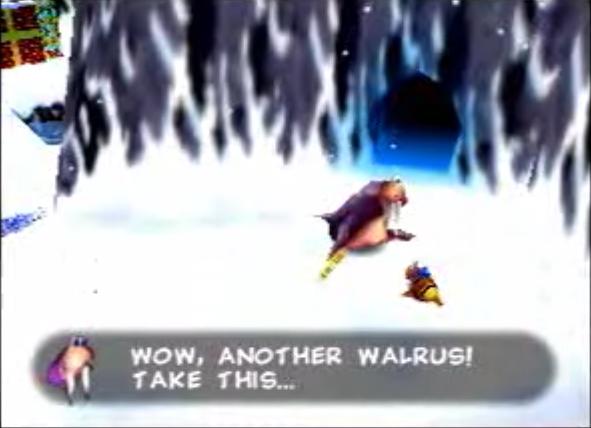 You know, I just realized that this article is probably going to make no sense to anyone who hasn’t played Banjo-Kazooie. If you’re one of those gamers, you should either skip this article, or go play this game on the Wii’s Virtual Console.

What’s that? Banjo-Kazooie isn’t on the Virtual Console? That’s LAME! Once you beat all the worlds in the game, you go head-to-head with the game’s boss in a quiz show that, for many gamers, has proven to be the best part of Banjo-Kazooie.

This is a fun quiz show. It has physical challenges; questions on recognizing the game’s music, character voices, and scenery (from oblique angles); as well as death squares, in which you’re asked a random question and killed if you get it wrong. Basically, it’s Cranium, though the game was released years before Cranium came out. They did a great job on this. 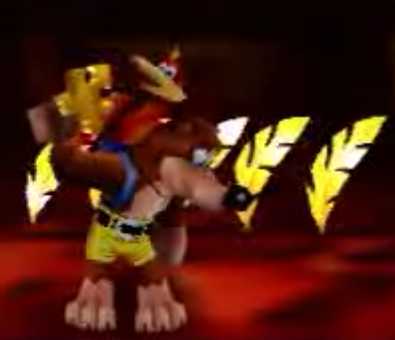 Sorry I couldn’t get a picture of the shield in action.

This game’s invincibility mode is the golden feather shield, where Kazooie covers Banjo with her wings. It lasts for 20 seconds at most, and it not only makes Banjo impervious to attacks, but it also automatically kills any enemies that you touch.

The best part about the invincibility mode is that you can activate it at any time in the game. I mean, think about it. Remember the invincibility mode in Super Mario 64? That weird-looking Metal Mario thing? You only got to use it at certain times. Well, that’s lame! I want to be invincible whenever I want! That way, the boss fights are much easier. 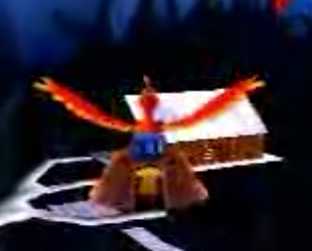 We’re soaring…flying…there’s not a star in heaven that we can’t reach….

One of the things that got everyone excited about the N64 was the ability to play games in 3D!!! Your characters could not only move forward and back and left and right, but now they could also move…UP AND DOWN!!!

But if you think about it, the only way to move up and down is through either jumping or flying. Hence, a lot of 3D games have flying modes. Well, this game has the best flying mode that I have ever experienced. It works perfectly, and the controls are so intuitive that there is no learning curve. Much better than, say, in Super Mario 64.

What they call “flying” in Super Mario 64 is not flying. That is SWOOPING. SWOOPING, you hear me? It is NOT flying! [CENSORED] you Mario and your lies about flying. I hope Bowser takes that flying cap and shoves it up your [CENSORED] while he’s busy [CENSORED] your precious Princess Peach, you lying [CENSORED]! 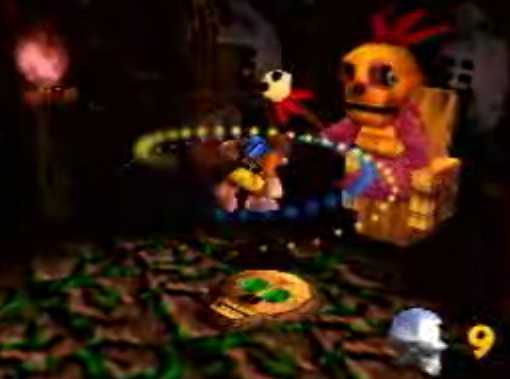 Woah, things got a little intense there for a moment. Sorry about that. Now, what was I talking about again? Oh yeah—Banjo-Kazooie.

What more can I say? Mumbo Jumbo is a cool character. He has a cool shaman voice and magical transformation powers, and he lives in a house that’s a giant replica of his own head. Plus, sometimes he accidentally turns Banjo and Kazooie into a dinosaur. What more can you ask from this guy?

If you die, you get treated to a cool scene in which a Grunty wins and steals Tooty’s cuteness. Basically, in the scene, Grunty turns into a superbabe, Mumbo, who’s clearly hoping to get laid, immediately comes to beg forgiveness, and Tooty becomes an evil, deformed monster.

Seriously, everyone, it was so great that I was never disappointed when I lost the game. Even if you’ve already seen it, you need to watch it again, just to remember how cool it was.

Speaking of cool cutscenes, props to Rare for their five-minute Game Over…psyche! scene. It totally had me fooled into thinking I had beaten the game.

Reasons Why I Dislike Banjo-Kazooie 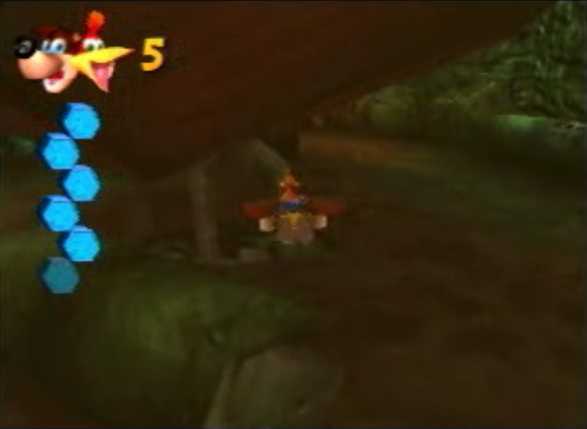 Clearly not one of the finer moments of the game.

Ugh, swimming. I’m not really a fan of swimming in videogames. I don’t even like swimming in real life.

Well, I’m sorry to inform you that even though swimming generally works well in Banjo-Kazooie, it becomes insanely boring/hard at the part in Clanker’s Cavern where you have to free Clanker, because you’re forced to swim for a few minutes without a break. That’s too much swimming for my tastes. Less swimming, more pooping eggs out the butt, please!

Right, so that’s it for this month! Hope you enjoyed my discussion of Super Mario 64 without all the suck—err, I mean, Banjo-Kazooie! See you next time, folks!