Connecticut Senator Gayle Slossberg (D) is now looking for gamers to help her reach the “Rape Scene” within Grand Theft Auto IV. Slossberg stated in an inverview with The New Haven Advocate that she finds this scene quite the negative impact in raising our children, and is going to use the “Rape Scene” to fuel her arguement in getting better warning labels placed on game boxes. Or rather, she would use the scene, if only she had the ability to make it that far in the game.

Senator, you clearly aren’t tring hard enough. I got to the Rape Scene not 15 minutes into the game! I mean come on! All you do is punch out an army of cops, get the rest of your Mexicans buddies across the border, kill a baby, go bowling with your cousin, and then you get to the Rape Scene! I mean, really now! I know you have little time on your hands, what with your ultra-special political voodoo you need to perform to get through daily life, but the least you can do is find the infomation you need to make your arguements valid! I mean, if you’re not raping someone within an hour of gameplay, you really have no hope as a gamer, much less a human being.

Mario, travelling on a Yacht? What an elitest bastard. He’ll never become president.

Nintendo released today its summer lineup of titles in North America. In addition to the forthcoming Super Mario Sluggers (which out a major media blowout at GameTrailers yeserday), and some… hidden picture…thing… Two other titles, Wario Land: Shake It, and Kirby Super Star Ultra were revealed to be a part of the lineup as well. While I’ve never been much of a Kirby fanatic, I can safely tell you, with all of my manlyness in check, THAT I AM PISSING MY PANTS IN EXCITEMENT FOR A NEW WARIO LAND. YOU KNOW HOW LONG IT’S BEEN SINCE WARIO LAND 4? SEVEN LONG YEARS. 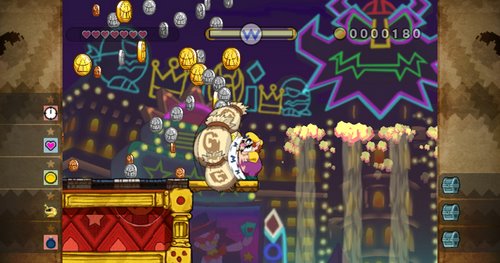 There really is a god, after all.

Finally, tonight, there’s a nice little freebie for you Gutiar Hero III players on the PS3 and 360 tomorrow. Even though the merger between Antivision and Blizzard is still months away, the engaged couple are still exchanging gift to each other to make their comming union all the more special. Level 70 Elite Tauren Chieftain’s “I Am Murloc” will be the third cross-franchise music to be featured in GHIII. (If you’ve been keeping track, themes from Halo and God of War have already been offered as freebies to GHIIIplayers. In addition, “Still Alive”, from Portal, was added to Rock Band as well.) While I have absolutely no idea what this theme actually sounds like since I tend to stray away from World of Warcraft like a fat kid avoids carrots, I do love my free downloadable content, and everyone knows my sexual lust for crossovers. The day we find Guitar Axes in WOW is both very near and quite far off.

A webcomic by Nathaniel Hoover.