The column that calls upon GameCola writers as well as the videogame world at large to talk about what’s up in gaming. 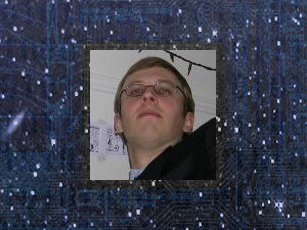 Alex Jedraszczak is a current GameCola staff writer known for his reviews, and this is his fourth appearance in Versus Mode, having written previously with Eric Regan, Jamie Juett, and Sprite Monkey.

Michael Ridgaway is a current GameCola staff writer known for his monthly article Quantum Geek, which chronicles the adventures of a boy trapped inside a videogame system gone haywire. This is Michael’s first appearance in Versus Mode.

1. Virtual pets can be as good as the real thing.

Alex: “As good as the real thing”? I think you mean BETTER than the real thing! Even for an extremely overpriced virtual pet like this one likely will be, the only way that a real pet could be cheaper than the game would be if it was “free to a good home.” Yet, “free to a good home” tends to just mean, “you’ll have to pay for the $200 worth of shots yourself.” After that, there’s food and regular maintenance, and when the thing starts to be more annoying and less cute, it doesn’t just disappear. No, you’re stuck with that dumb thing until it finally decides to die in fifteen years, unless it conveniently “runs away” when you “accidentally left the gate open.” With a virtual pet, you don’t have to worry about it if you go out of town, or hope it doesn’t mess up the house if you just have a long day at work. And how often do you find a creepy monkey thing at the pet store, anyway? 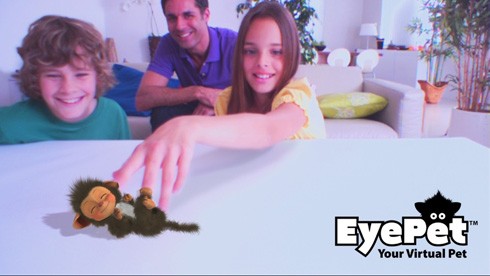 Michael: I feel like every time there’s new artificial pet development some jackass is required by law to write an article about how we no longer need live pets. Unless artificial intelligence advances to the point where it can exactly mimic actual intelligence, this will never happen. At the end of the day, the EyePet is still governed by lines of code that tell it exactly how to react at all times. It’s ordered and, therefore, boring. Life, by its very nature, is chaotic and interesting. I don’t know why my kitten randomly tears ass across my apartment, or when she’ll come up and start licking me. The EyePet, for all its motion sensing abilities and advanced programming, can still only react in a specific way each time, while living pets can react differently and in unexpected ways. Until virtual pets can consistently surprise us by their behavior, they will never be as good as the real thing.

2. No one should ever pay money for a demo.

Alex: Why wouldn’t you pay for a demo? There’s no such thing as a free lunch, folks! If you get a free demo, that actually means that you’re going to pay more for the full game, or otherwise that the game company (and, thereby, the programmers, designers, artists, and so on) will make less money and be less compelled to continue producing good games. Don’t want to pay? How about you wait for the game to come out! Is it really so difficult?

Michael: A demo is something companies distribute to entice people to buy the full version of their product. To me, it seems like bad business to charge for a demo; Square Enix is creating an impediment for people who are interested in their product and looking for something to help make up their mind. In that respect, this is an idiotic idea.

At this point in the Final Fantasy franchise, however, people have already made up their minds about whether they will buy this game. To that end, this demo gives Square Enix the chance to pick up some extra money from the FF junkies who are willing to put up a few bucks for an early taste. So in this case, it’s a good idea.

While I am opposed to companies charging money for demos, I can see how it would help the business. For a small company, it’s a terrible idea. You want as many people to try your game as possible, and making it free will help it get around. For large companies with well-established franchises, charging for demos is undoubtedly a dick move, but at the end of the day probably doesn’t hurt their sales and even brings in extra revenue. In the end, the gamer in me says hell no to priced demos, but the businessman says it’s all relative.

Alex: This problem has been brought on by the gamers themselves. If people don’t want to be paying for heavily protected games, maybe they should stop pirating them. Do you really have to go download a pirated copy of Half Life to play Counter Strike when you can pick up a $5 copy in the bargain bin? If you enjoy Diablo II so much, why don’t you just pay the $40 and also get the original, the expansion, and the guide books, and stop having to mess with key generators? This is the product of my explanation in #2. People didn’t want to pay, and overly protective license agreements are one of the results. The other results include games like Big Rigs: Over the Road Racing, Ball Breakers, and Super Smash Bros. Brawl. This is the future of gaming, until people start to listen to the brilliant advice of Don’t Copy that Floppy.

Michael: It IS ridiculous. Game companies, while I agree you have a right to protect your product, hackers WILL find a way to hack your game. The only people you’re hurting here are the faithful, who gladly hand over their money for your product and expect a pleasant experience in return. Draconian DRM can ruin this experience and alienate the people who will actually pay for your game. Better methods need to be developed.

4. There won’t be another generation of videogame consoles after this one.

Alex: I have to agree on this one. Not so much from a technological standpoint, but simply as a matter of economics. Gamers tend not to be keen on paying for expensive games, as we’ve seen in the previous two points. If Sony were to make the PlayStation 4, in order to make use of the excessive capabilities of such a system, game companies would have to step up their own production costs. Graphics design would be an incredibly laborious process, in order to create realistic visuals that look clean on the ultra-HD televisions of the future. Physics systems would be programmed to control particles on a level of detail greater than actual reality. All of this time spent making these games has to pull on the cost or quality corner of that triangle thing they show you in business classes. And, considering the wallets of gamers these days, it basically means that we’ll end up with beautiful, incredibly short and pointless games with lame stories and bad gameplay.

This already describes the modern gaming world, so, really, I can only imagine that, if new consoles were to be developed, they would actually be more like beefed up versions of older consoles. This is my dream world, at least. I mean, how awesome would it be if someone made a Super Super Nintendo, with the same or slightly improved graphics, but better processing power and more memory? Imagine games such as Final Fantasy VI, Chrono Trigger, or Castlevania: Symphony of the Night, except now, they are unimpeded by technological impotency. That’s what we really need! That is the true path to gaming enjoyment! Say “NO!” to $100 games and $500 consoles! Say “NO!” to overpriced, overhyped games with ridiculous graphics and lacking stories! The road to the future is the way of the past! JOIN ME! JOIN THE DEVOLUTION! FREE YOURSELF OF YOUR GAME-MAKING CAPTORS AND FOLLOW ME TO GAMING PARADISE! COME TO THE LAND OF SPRITES AND HONEY!

Michael: Nintendo has shown that they can use an innovative new console to generate new income. And by new income, I mean that Shigeru Miyamoto sleeps on a bed of money under money blankets with hookers made of money. As long as that holds true, new systems will be developed. Within the next few years Microsoft and Sony will come out with their own systems to rival the Wii, but by that time Nintendo will have moved on to their new innovation and will be making tons of money with that. And the whole cycle repeats.

5. Gamers need to stop drawing penises in everything.

Michael: Yes, but it will never happen. It’s human nature (especially for guys). Ever hear of the Cerne Abbas giant? It’s an ancient hillside figure in England known for having an ENORMOUS phallus. Call it juvenile, call it chauvinistic, call it rude, but it’s what we do. I do wish people would be a little more creative, though. Everyone and their mother is making penises on Spore or on DS chat, but I hardly ever see giant snow penis or stones arranged into rude shapes anymore.

On the last episode of the GameCola Podcast, we discussed the fact that Luke (from the Professor Layton series) has a different voice in the US and UK releases.  My latest Layton walkthrough is for t