Here’s something to get your jollies in a knot: A game with Mario’s name in the title and no Mario to be found within! Well, that’s not entirely true. He does show up to be a total asshole at the end, but that’s beside the point.1 What matters is that this is a Mario game where there isn’t much Mario to be found. What you have instead is whom I spent my elementary school days believing to be Mario’s evil twin brother: WARIO.2

Wario Land : Super Mario Land 3 is the final title in the “Land” series to have any connection to Mario. The spotlight shifted away from the famous plumber and onto the antagonist of the last game, now grumpy and simply steamed over his upsetting loss to said plumber. WARIO sets off to do something no Nintendo protagonist had ever done before: say “screw you” to the world and find some money to rub in the face of the real hero. This quest takes him to Kitchen Island, in pursuit of Captain Syrup and her band of pirate thieves, who have just stolen a statue of Princess Peach.

WARIO’s first foray into being the main man is very different than anything Mario had done before. While Mario’s jumps are light and airy, Wario is heavy and can slam himself onto the ground, hurting everything around him. WARIO is so strong, even, that he can’t be killed by being touched by passing drones, unlike that wimp Mario. Drones actually need things like spears, or spikes, or teeth, or lasers to put a dent in WARIO’s muscular bod. Otherwise, they get a shoulder slam to the FACE—the only way WARIO can do it! Jumping on top of baddies is not the way WARIO gets rid of them. He punches them, and he can pound the ground while falling. He can also kick them up, grab them, and then throw them into a wall.

This picture alone tells us that WARIO is 10 times the platformer that Mario will ever be. And by means of selective property, 100x Sonic. And while I’m ahead, 10,000x Tommy Pickles.

This is the only time in the series where WARIO has a few different hats to use. There’s the Buff Hat, a helmet with Viking horns, which powers up his attacks; the Dragon Hat, which spews flames from the nostrils of the hat; and my personal favorite, the Jet Hat, which allows WARIO to soar through the air, kicking the crap out of anything in his way. If WARIO gets hurt, he loses the abilities of whatever cap he is wearing. If he gets hurt as normal WARIO, WARIO becomes Little WARIO, sans a hat and muscle, and he is unable to punch until he finds some garlic and becomes normal again. Later in the series, it’s all about getting knocked around by the elements, and turning into zombies and crap. But not in this game. There is still a shred of Mario’s weaksauseness here, but luckily WARIO threw all of that away by the time Wario Land II came around.

A major focus of the gameplay is on collecting as much money as possible. The ending is determined by how much wealth you obtained throughout the course of the game. Coins are scattered throughout the stages, and punching out drones makes them cough up some dough. WARIO can pay ten coins for a giant coin to attack with, something very mandatory when he’s little and unable to punch. Through many stages, treasures are kept all over the place, hidden away for you to find. Finding a treasure adds much ka-ching to your endgame results.

At the end of most stages, you have to throw a 10-coin coin into a locked door in order to progress to the post-stage minigames. The first game is a simple “Two-Ropes-One-Doubles-Your-Cash-One-Shits-On-You” challenge.3 The other is a little more complex. WARIO throws bombs at passing drones, and you have to judge the distance and power of each of your five throws. It is much harder than the other choice and costs a lot of coin, but it offers many extra lives to the winner. 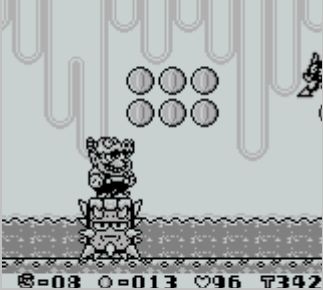 It’s taken me the past 13 years I’ve owned this game to truly determine what that wavy gray stuff is. My six-year-old brain kept telling me it’s simply funny looking apple juice, ’cause it gets extra sticky, but as I got older, I remembered that the villain’s name is Captain Syrup. It’s the motor oil that’s leaking out of her ship!4

Although, there really isn’t much need for it. Wario Land, like the game before it, is very much on the easy side. There’s some tricky platforming here and there, and the stage design is actually quite nice for a Game Boy game, but the bosses and drones are at times nothing more than a small hassle. Those ducks with the boomerangs, though—those are a damn nightmare. I’m not sure who this Captain Syrup lady thinks she is, but giving a duck a bandana, an eye-patch, and a boomerang is a stroke of genius I’m going to have to remember when me and my duck army attack Québec next week. 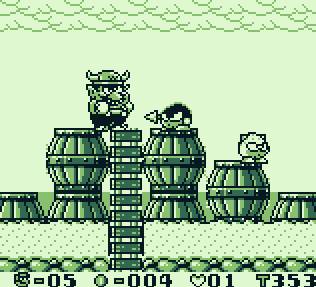 The world will know that the bodiless stood up to a fat tyrant with horns, with a sole spear to match.

And look at that detail. This is one of the most detailed Game Boy games I can recall in my large and tidy mind without Metroid 2 coming out and reminding everyone that it still exists. The drones are cute and cuddly, WARIO’s smile is a goofy little thing, and if you pay close attention, you’ll find that his eyes are a little screwy-dooey, just driving home the point that it is impossible not to love this man. Although the game’s soundtrack won’t top any “best-of” lists in my book, there are some nice melodies to hum to, and the sound effects are enough for your Mom to tolerate when she’s driving and you’re playing in the backseat ten minutes into a 16-hour drive from New York to No Orleans.5

At the end of the day, Wario Land does a lot right. It’s a great handheld title, even today, and it could manage four-to-five hours of play by itself. It gives you everything you need to know about everyone’s favorite anti-hero before he became the CEO of a videogame giant. It’s not the most memorable title WARIO has thrown himself into, but it’s a damn good one, and it really makes me wonder why I love that fat, egotistic, greedy, uncultured, disgusting, abusive, lazy, unkempt slob of a jackass of a princess so much.

1. The day Mario becomes the final boss in any game is the day I go to school proudly displaying myself in my underwear, moose antlers, and a sign that says “This is what happens when you work at GameCola.net.”

2. Other things I believed while in elementary school were Link being called Zelda, the Super Mario Bros. Super Show being a bunch of unresearched garbage, The Backstreet Boys being the best musical group to live ever, and God.

3. Which is more preferable to the “Rope-Drops-Last-Member-Of-GameCola-Staff-Not-To-Declare-Romantic-Obsession-To-Neil-Patrick-Harris” challenge. You’ll join us soon enough, Paul.

4. Or whatever pirate ships run on these days! I’m not an expert, or a captain, or a birdwatcher or something!

5. Is that political subtext you’re reading there, or are you just happy to see me?

With an easy-to-follow flowchart!