Super Mario Bros. introduced him and made him a star.

Super Mario Bros. 2 stretched his range and opinion and made him an icon.

If Super Mario and his brother Luigi had never made another game after this one, they’d still be stars today. They wouldn’t be as much of a public force, but their impact would still be such that people’d still be playing these games today, hoping in vain for a new Mario Bros. title.

Here ends the immortal trilogy I’ve sought to write about. Cinema has the Star Wars trilogy. Literature, the Lord of the Rings, and music has the Beatles’ period between 1966 and 1969. The Super Mario NES trilogy blows them all away. The sheer wealth of creativity and fun and replayability and depth and balance is enough to entrance modern man by the millions and millions.

Few things in life ever live up to their hype. Indie music. Buddha. Apple pie. David Cronenberg films. Seth McFarlane, although I’ve really warmed up to American Dad since May. Swords that aren’t katanas. Albert Einstein. Communism. California. Lead guitarists. Phoenix Wright, and the entire starting lineup of the first preliminaries of the Beijing Olympics 100-meter freestyle swimming event. All of them suck balls faster than a small void of infinite space spontaneously appearing on your testicles and ripping them off into regions of the universe that exist and do not exist simultaneously with other layers of options available.

But Super Mario Bros. 3 does not. It lives up to its hype over and over again. The graphics and design are so well sculpted that you won’t even know you’re playing an NES game. They’re colorful, surreal but never bizarre, and impossible to be more appropriate. The soundtrack is legendary, an even bigger compliment considering that Mario’s most famous theme does not appear in it at all (at least, it’s not in the NSF file). Controlling Mario has never been better (although that Frog Suit can be a pain in the ass), and everything from the large span of levels to the small little icons that often dot the skies is just right. You get a great item system, too, which lets you employ a wide variety of shit to get through all manners of Hammer Bros. and ghosts and Thwomps and bombs—ick, it’s almost overwhelming.

And then we come to godliness—the level design. Pyramids, water worlds, giant worlds, ice worlds. Holy fuck. There are crazy hidden items and levels within levels, and alternate paths, and coin levels, and coin ships, and trap levels and tanks and airships and fortresses…. Writing it doesn’t come close to describing it; you need to see it in action.

And you have, and you want to see it again. We all do. 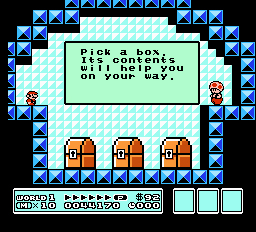 If this game fails in one place, it’s that the levels are QUITE short. Even the final castle isn’t half as intimidating as it looks. Also, that Frog suit can be more trouble than it’s worth.

But that’s hardly a quibble. This game is a godsend. Like Scarface to Pacino, this game forever secured Mario’s legacy, as well as the NES’s, and Nintendo’s, and humanity’s at large.

I still can’t believe that no one on GameCola has reviewed these games before me. It’s just as well; no one else here would’ve done them justice like I did. Arrogant, but precise. The Mario games live up to their hype and then some. Some need some history and context (SMB1), some are so freakishly weird that they redefine badass (SMB2), and some just blow us away (SMB3).

How often does Michael update his guides? As infrequently as possible.