My name is Michael Gray, and I am an Oz superfan. I am a member of the Official Wizard of Oz forums, you can find over an hour of me reading the Wizard of Oz (as well as an hour of me and Marianne reading Mary Louise and the Liberty Girls), and I single-handedly released one, two, three, four, five,six, seven L. Frank Baum books into the public domain. All of these books have been put back into print, without me getting a cent for all my hard work. Which is total BS, by the way. Grumble grumble.

I’m really glad for the opportunity to talk about Oz, because it gives me a chance to insult the popular Broadway play “Wicked.” For those of you who don’t know, “Wicked” is a remake of the Wizard of Oz (the movie, of course, not the book. Who reads books nowadays?). It has a “mature” storyline about the two witches in witch school, falling in love with the same guy and that sort of thing.

As an Oz fan, I am legally required to dislike that summary. In fact, I am sick of hearing people extol this play’s “original premise” to the heavens (“A remake of the Wizard of Oz? How clever!”). Let me set the record straight here. There are two main reasons why “Wicked” should scare, not attract.

1. Having a basis in the movie, not the books.

The book is always better than the movie. But that’s particularly the case for Glinda in the Wizard of Oz. See, unlike in the book, Movie Glinda is an evil, manipulative bitch. Think about it. Glinda gives Dorothy the ruby slippers. Glinda knows the ruby slippers can take Dorothy home. But she doesn’t tell Dorothy about it until the very end of the movie. Why?

Glinda could have told Dorothy about the slippers at any time, but she waits until after Dorothy kills the Wicked Witch of the West. That’s why. She wants the Wicked Witch dead, so she lies to Dorothy, saying she can’t get home again, and sends her on the quest that results in the Wicked Witch’s death. So basically, Glinda is using Dorothy in order to do her dirty work. What a bitch.

2. Boasting that it’s a “mature” version of Oz, because it involves sex.

No. No. No. You do not ruin everyone’s childhood by turning it dirty.

The books are G-rated, for the good reason that most of the human characters—Dorothy, Ozma, Button Bright, Ojo—are little children. They’re twelve years old, at most, because most of the kids who read the stories are that age.

So needless to say, it’s near-impossible to pull off a sex-filled version of Oz without having an overwhelming sense of pedophilia. Couple that with the fact that most of these stories contain blatant self-insertion, and you can understand why these “mature” Oz books went out of print quickly.

Oz fans, rejoice. Emerald City Confidential avoids the two hazardous pitfalls listed above. It was made by people who have actually read the book series. In fact, a Ruth Plumly Thompson reference gives me good reason to believe that the game’s creators have gone above and beyond the call of duty by reading the Famous Forty.

And, as amazing as it sounds, Emerald City Confidential manages to pull off a mature aura without being repugnant. How, you ask? By interpreting “mature” as “film noir,” not “pornography.” The game is G-rated like the Oz books, and this is combined with a film noir setting, which makes for maturity without perversity.

Yes, it’s a film noir version of Oz. You play as Petra, a sassy private detective. The premise is that the Phanfasm War described in the Emerald City of Oz went a lot worse than it did in the book, and Oz has become a semi-corrupted land, ruled by fear of another war. Fortunately, Petra is here to make things right again.

That’s the general plotline, of course (I’m being general so as not to spoil anything). The theme of an upcoming Phanfasm war, as well as what happened to Petra in the last war, looms over the storyline while Petra goes through a series of smaller objectives like “Question Jinjur about the explosion,” “Escape from prison,” and “Defeat Mombi.” Eventually, the two plots seamlessly merge halfway through the game when Petra comes face-to-face with Ozma and is given the task of saving Oz.

And it’s funny. Did I mention funny? Film noir is an inherently humorous genre, because the main character makes sarcastic comments all the time. Petra does this consistently throughout the game, even going so far as to belittle you if you choose to do something stupid, like “Take the case for free.” And I like seeing her get defensive when the other characters make fun of her hat. 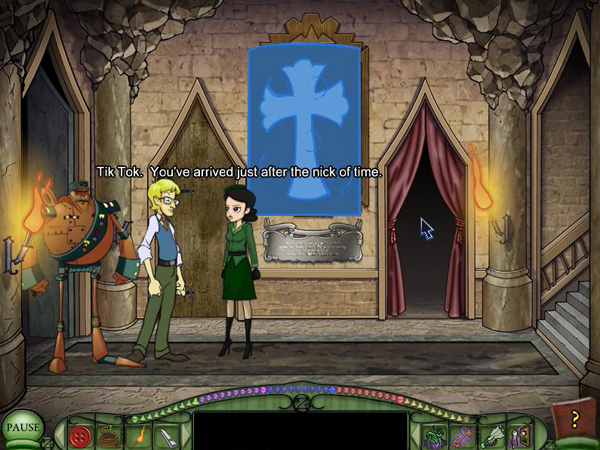 As far as the game set-up is concerned, Emerald City Confidential is a typical adventure game in the style of Monkey Island or testgame. You walk around and explore various places, talk to various characters, pick up items and solve puzzles. The only thing that’s really different is that Petra has a normal inventory on the bottom-left, and a spell inventory on the bottom-right.

Yes, a spell inventory. You get to use magic! And it works a lot better than it does in Harry Potter and the Order of the Phoenix, a game with magic controls so poor that my friend Marianne stopped playing the game because it was impossible to solve Luna Lovegood’s challenge. You use Petra’s various spells a few times in the game, both to solve puzzles and to defeat enemies like Mombi. The magic system doesn’t get stale, either; near the end of the game, a new twist is added—the ability to reverse spells, thus giving you a whole new set of possibilities and puzzles to solve.

There are a few new characters in this game, but I still had fun playing just to see what they’ve done with all the Oz characters to make them more film noir. The Lion is a high-level lawyer involved with illegal activities. Jack Pumpkinhead is a smuggler. The Frogman runs a racketeering…um, racket. Cap’n Bill and Trot are…well, they’re still sailors. I’m sure that people who don’t know who those characters are won’t get the same sense of satisfaction when meeting them, but that’s their fault for being so illiterate.

All in all, I say this game is awesome. Good puzzles and a good storyline make for a good adventure game. Then again, Emerald City Confidential was made by the same group responsible for giving us The Shivah, which won an award from GameCola, so what else did you expect? 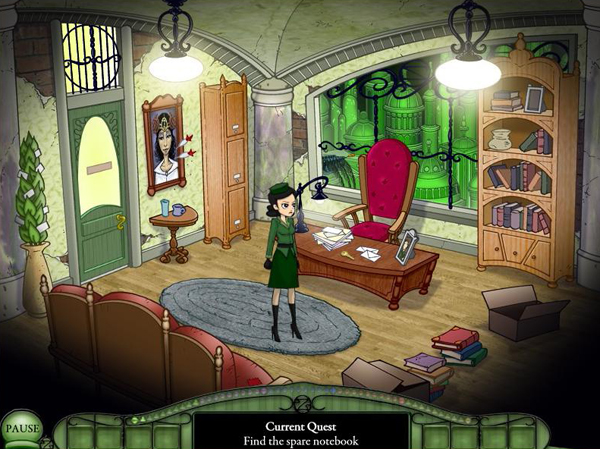 The major downside to the game, I’m told, is the fact that the task system is oversimplified. I agree that “Go to the docks” and “investigate the docks” didn’t really need to be listed as separate tasks, thus making the “Task complete!” screen slightly cumbersome, but it never bothered me during the game. When you replay the game, it can be annoying, but playing the game for the first time, the task system works fine.

What bugged me the most about the game was the auto-save feature, because it prevented me from going back and replaying some of the more awesome parts of the game. Also, I guess the ending was a little sappy, but I don’t care too much about that, because Petra deserves a happy ending after all the crap that happened to her.

I wanted to give this game a 9 out of 10, but the overall score ended up being lower because I had to give ratings for things like “controls” and “novelty.”  It’s a point-and-click game, people! Do controls and novelty really matter?