Hello, hello, and welcome to this month’s edition of testgame.exe: Making the Adventure! I guess you guys are pretty used to this by now, but there’s not too much new stuff this month, but those things that are new are pretty exciting! (Or at least I think so!)

We’ve got the usual work on background graphics, for starters. I’m actually pretty well convinced that the background for the castle hallway (the one with Hans in it) may in fact be finished. I’m generally very happy with how it’s turned out, so yay for backgrounds. 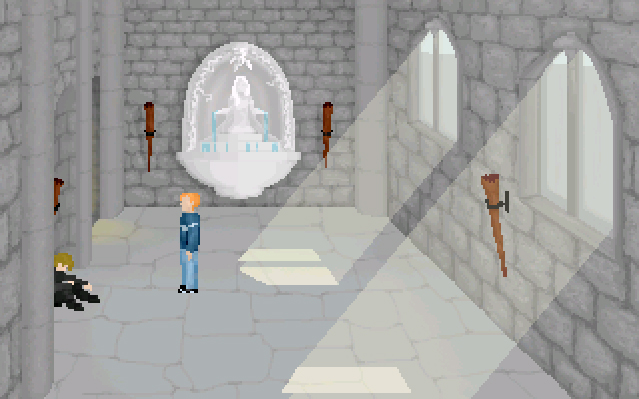 As of this month, I’ve also started re-thinking Paul’s stats and leveling-up trajectory. I’m still really happy with the three different possible “classes” (as it were), depending on which item Paul chooses from Lily’s bag in the beginning, but the “warrior” class (via the fish) has been gaining strength a little more slowly than I think it should as Paul levels up. So you’ll start seeing some small changes in that area over the next few months as I continue to tweak the character growth system.

Something else that’s been bothering me recently is the battle with Artie on the road to the castle. This month, I’ve gotten rid of some of Artie’s more ridiculous (read: impossibly powerful) attacks, because while they look cool, they’re just really annoying to deal with in the actual battle. So no more “Aaarrrrgh!DiePaulDie!” or “Kilt Man Flash.” I’m sorry to everyone who liked those attacks, but like I said, they were just getting out of hand. I am, however, keeping his “Stones’ Throw Away” attack, because, let’s face it, the idea of Artie summoning his pile of magical stones into battle is both poignant (poor Artie, with only stones to keep him company) and hilarious.

One last thing to keep an eye out for in terms of changes in this month’s update: I’ve added a handful of cool new equipment items for the little vine, so go to the various shops and check them out. There’s also one particularly powerful item (new weapon, anyone?) that you can only get by defeating Stone Gargoyles in the castle. There’s only a 1 in 100 chance of them dropping it, though—that should keep all you item-collecting-perfectionists busy. 😀

So go ahead and check out the game!

(Also, if anyone gets the chance, could you let me know if the game still freezes when Paul reaches level 100? I thought I fixed that problem last month, but I’m afraid it may still be there…. *sigh* Maybe I should just go back to capping the level at 99. 🙁 )

2. Seriously, though, the background work is real. And I’m still working on the dialogue/cutscene with Herkimer. It’s going to be awesome when it’s finally in the game, I promise.

Nancy Drew has only solved one murder mystery in her 20+ game series, and that's the murder of Jake Rogers, a student at Paseo Del Mar High who was violently pushed down a flight of stairs. Nancy's fi