Pull up a seat. Let Uncle Christian tell you a real rags-to-riches story about a once proud genre of games—the business management sim. They enjoyed a rise to popularity in the 1990s, with titles like Aerobiz Supersonic and Rollercoaster Tycoon, and the genre arguably reached a peak with 1997’s Theme Hospital. But, like the David Hasselhoff of game genres, they’ve largely fallen out of the spotlight since the 90s, and are only still loved in Germany for some reason. Now the games populate Wal-Mart’s $2 bin next to Street Cleaning Simulator 2011. So, with a genre that’s gone so far down the toilet and is so beloved by Germans, it probably shouldn’t be a surprise that this relatively recent release was known as Klomanager, the original German word for Toilet Tycoon.

The defecation theme of the game starts the moment you boot it up with what I can only describe as a MIDI sequencer taking a high-pitched shit directly into your ears. The music in-game is better, but not by much. I’d suggest you mosey on over to the Options menu and turn off the music right away. In fact, while we’re at the Options menu, I’d be remiss if I didn’t mention some of the strange options this game has. First is the option to hide the mouse cursor…in a game that is played solely with the mouse. I guess for extra challenge you could do a no-mouse Toilet Tycoon speedrun video for all the nobody who would care to watch. The other, even more peculiar option is a toggle for “Enjoyability.” With the box checked the game works normally; if you uncheck it, then every time you click your mouse, a radio button menu comes up asking if you intended to do a right click, left click, or get a refund for the game (grayed out). I assume it was put in as a joke, but I can’t really say I get it. 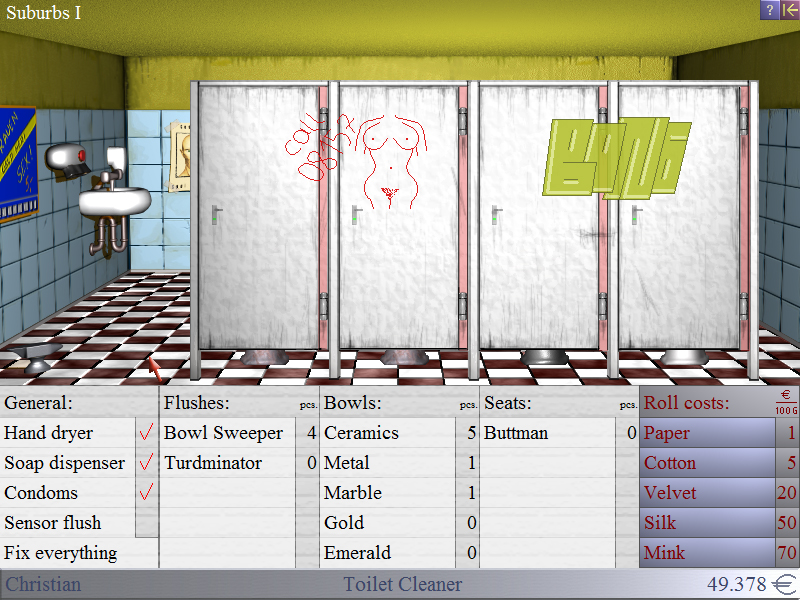 As this is a head-to-head business sim, if you don’t have any real friends who are willing to play Toilet Tycoon with you (and don’t delude yourself; of course you don’t), then you can play against one of three AI opponents: Butt Rogers, Flush Gordon, and Mr. Methane. You also get to choose your victory conditions. If you don’t feel like going through the trouble, don’t worry—that menu is navy blue on black, so you probably won’t be able to see the options, anyway.

Start the game, and you’re looking at your office, the hub for all the actions that you can do each turn. It also becomes your trophy room, quickly filling up with various gold-clad, toilet-related ephemera, depending on how well you do. From here you have a few options: You can view a map of all properties in the game, in order to purchase new bathrooms or update ones you already own; view charts and graphs of game stats; perform research to upgrade toilet seats and tanks; go to your war room to hire vandals and spies, spread rumors, or call the health department on your enemy; or just end your turn.

A good business management sim is a balance between too much complexity and not enough.Too much complexity and you’ve got a boring, hard-to-follow mess where the player might as well just go pick up a full-time job working as someone’s office manager and get paid for it, if they enjoy all the tedious bullshit that goes along with running a business so much. Too simplistic, and the player ends up not having enough control over the game’s outcome. Toilet Tycoon has the latter in spades, offering far too little control over the game and leaving entirely too much up to chance. 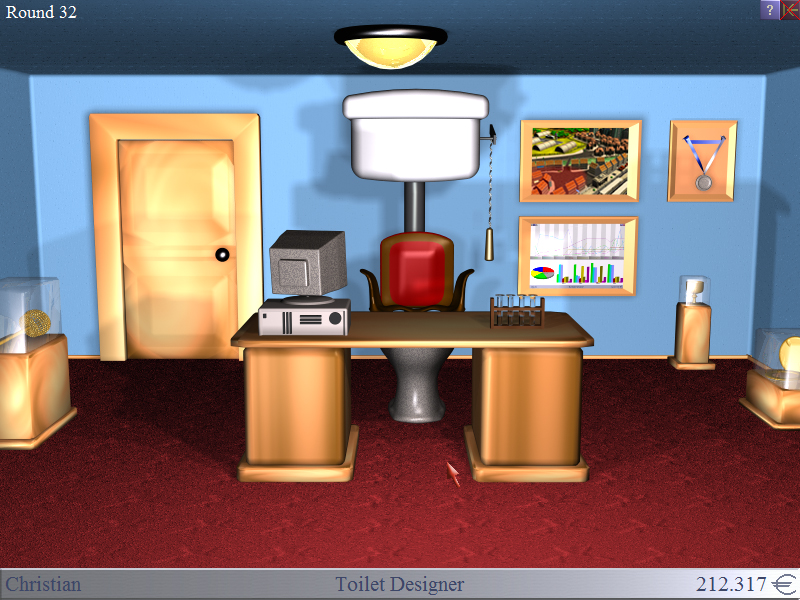 Research is your bread and butter in this game, and it’s all based on random luck. If your opponent gets lucky and your research just keeps failing no matter how much money you sink into it, congratulations—you’re up fucked creek with a turd for a paddle, because your opponent is going to be making €10,000 a turn while you’re making €2,000 a turn AND spending most of it on failing research while your opponent’s excels.

Well, at least you can hire vandals to smash his toilets and vomitters-for-hire to puke all over his stalls. However, that’s based on chance, too. Sometimes they succeed, but a lot of the time they get caught, and your attempts to vandalize are thwarted. Calling the Health Department? Also random, I’m afraid. Their moods fluctuate daily from good to bad, making them more or less likely to give the recipient a negative ruling, and after four playthroughs I never really understood what causes them to pass a negative judgement. Sometimes I would forget to have my stalls cleaned and they would be perfectly fine with everything; other times, I’d meticulously clean the stalls every single turn but would still end up with a negative ruling. So much randomness in this part of the game gets frustrating quickly, since it results in very high fines being levied upon you or, in many cases, your losing ownership of your property and all the equipment inside of it entirely—all for something you didn’t really have much of a hand in.

The original German version, Klomanager, was released in 2000, and it passed all of its late 90s graphics onto its predecessor. Graphics are reminiscent of most 90s 3D games, in that almost all objects look like they were just slightly overinflated by a bike pump, given a lacquered finish, and covered in cellophane for good measure. So, the graphics are bulbous, shiny, and awful, but perhaps we can take that as a positive. After all, this is a game about vomitters-for-hire, condom machines, and working your way up to a bathroom so swanky that your customers wipe their assholes with a roll of mink. Maybe we don’t want AAA graphics on this one. 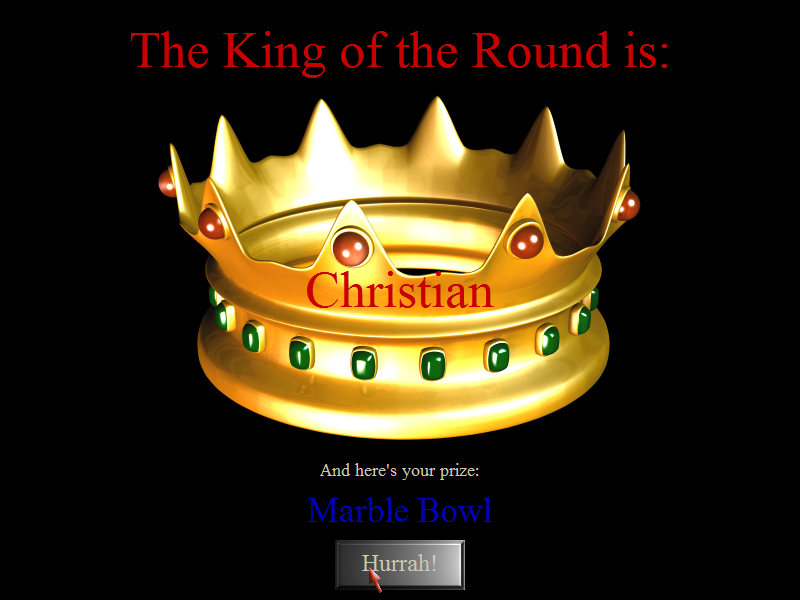 Because of the game’s heavy reliance on luck, and the fact that the person in the lead gains exponentially more money per turn than the person behind, the game tends to end in one of two ways: You get utterly trounced by the computer because it got luckier than you, or you completely destroy the computer because you got luckier than it. On top of that, there’s just not much to do. Once you get your Toilet Tycoon groove on you’re just attempting research (luck), cleaning/fixing your existing toilets (press one button), upgrading if possible (if your research worked), and sabotaging your opponent (mostly luck), then repeating that over and over. The satisfaction you gain after playing a good business sim is satisfaction of a job well done. The knowledge that the adversity you faced seemed insurmountable but, by sheer force of your own ability, you scaled that mountain. Toilet Tycoon robs you of that and replaces it with the feeling of either being cheated, or just getting lucky—and that makes for a hollow victory.

I’m a big fan of tycoon games, but this German import was just a bucket of scheiße.