Tales of Vesperia is more like Tales of Messperia. Namco definitely made a dog’s breakfast of this one. Not to be shot down if you’re a fan of the genre, but also neither to be truly praised for any reason at all. The game is pretty, so if that is all that matters to you (and if it does, I imagine you bought Final Fantasy XIII) then you’ll have fun regardless of the massive nuisances that you will notice whilst playing the game.

Of the forty hours it took me to complete Tales of Why Bother (spread over half of this year), twenty of those hours could have been removed from the game and it would have lost nothing other than side-quests and the moments where characters get all emotional and run away so you have to find them again. Just as the story is starting to pick up—about twenty hours in—it is soon stomped back down to a cinder. Every little meandering section you’re forced to play could have been a side-quest instead, as they just distract from the more important plot points…of which there are almost none. I understand that this is a common theme with JRPGs, but when you’re constantly referring to the in-game story synopsis and the world map to work out where to go, the story obviously doesn’t have the impact it is supposed to. The world map is a totally disheveled mess, too.

As far as role-playing games go, this game is fairly decent, but it could have been better if it ignored more of the RPG traditions that it so shamefully holds onto for deal life (save points, princesses, and whiny little boys who are crap in battle). Getting rid of random battles is a huge breath of fresh air, as are the battle grades and humorous dialogue, which is what results in Tales of Vesperia being worth playing at all if you are an RPG player (although it still will not be of  much interest to those who aren’t). Grinding isn’t all that necessary, too, which is rather welcoming. 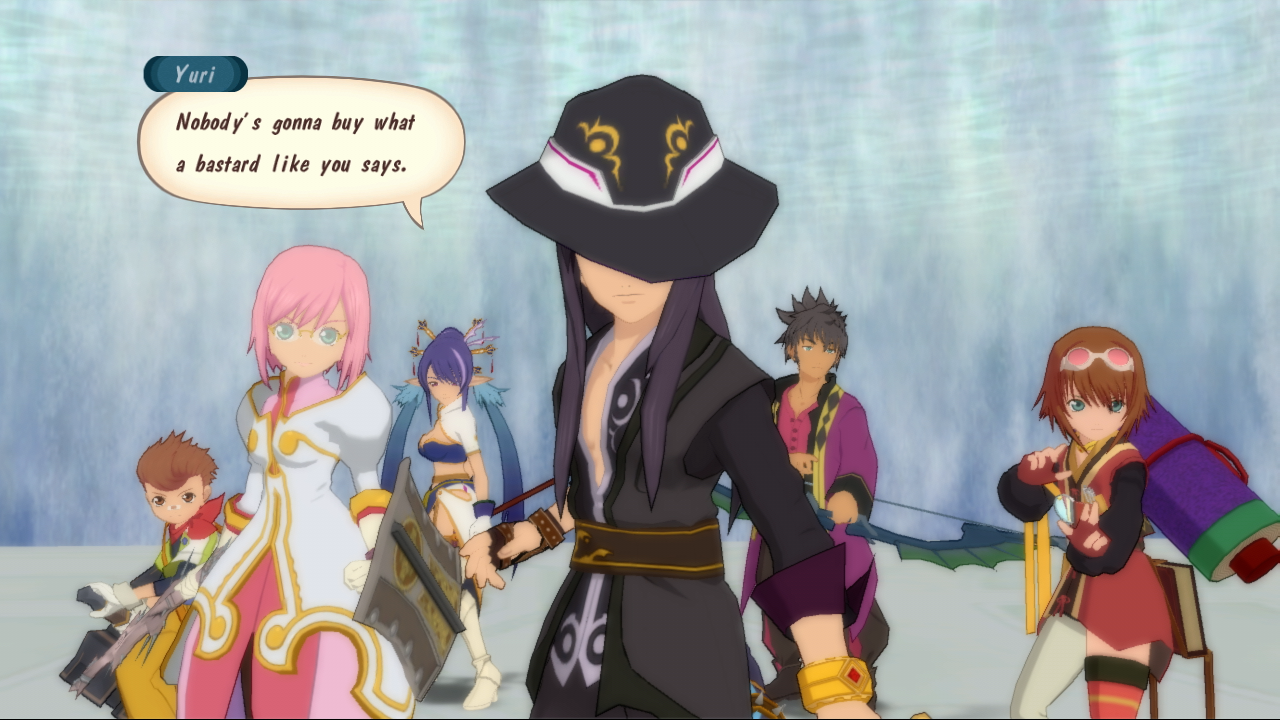 Tales of Yipee it’s Another JRPG starts with Yuri Lowell waking up from his sleep. He is a slum-dweller who was once a member of SOLDIER a Royal Knight, until he left them for some reason and decided to live life by his own rules. Now he’s a wanted felon, who lives in the slums and is an unsung hero to the other dwellers. Living life slowly, he dreams of having another adventure; but during all the time that he’s a hero for the others living in the district, his priority is with his people.

One day, the Materia “Blastia” that keeps the slum’s fountain working goes missing, and Yuri is convinced the higher-ups are somehow responsible. Once inside the castle, he meets the princess, except he doesn’t know she’s a princess. Swords clash with an unknown enemy, and the story bursts off from there, occasionally re-appearing every three hours just to see if you’re still paying attention. Usually the plot gets lost between anime stereotypes such as unnatural hair colors or impractical outfits.

If you’re one of these sad and pathetic losers who really, really love anime (because it’s cool to love anime) then this game might be for you. Especially if you think Studio Ghibli are totally the best and you go to cosplay conventions to hide the fact that you live a pointless and shameful existence. Then go on, enjoy Tales of Vesperia and put it on your shelf with all the others, in alphabetical order, as you do all your Naruto DVDs.

Less about Japanophiles and more about the game: It feels like the developers gave up half-way through creating this game and used CTRL-C and CTRL-V to make the rest of it. The final dungeon was nowhere near as much trouble as several of the preceding ones. Strapped for time? Maybe they were. The Tales of studio were developing Tales of Vesperia as a trial game, which was only apparent after Namco effectively named the 360 version the “Beta Version“. The Xbox 360 version is nowhere near as complete as the fully remade PlayStation 3 version. Namco failed to tell us at the time that all the Xbox 360 players were fee-paying beta testers, and you can imagine the reaction that came from us players, and the scale of it. 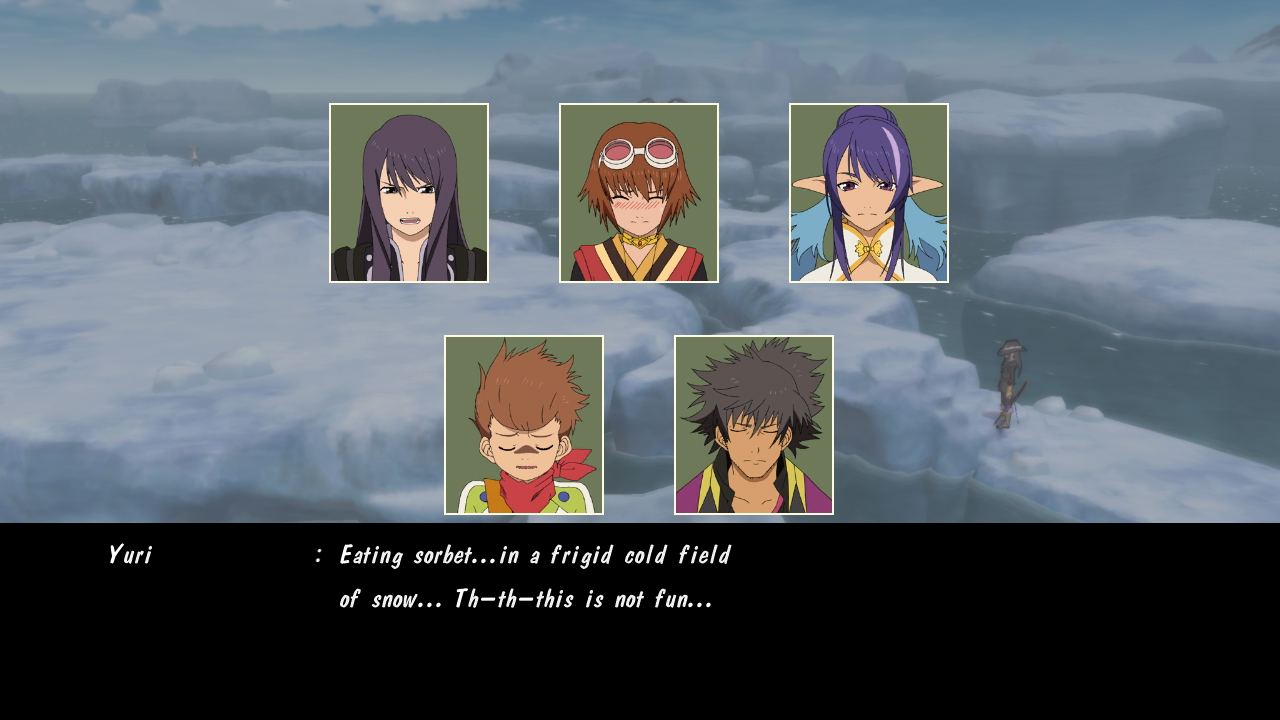 Neither is paying for a beta.

In the PS3 version, two new playable characters are added: Patty Fleur and Flynn Schizo. Namco, what kind of stunt is this? Why are there two empty character spaces at the final boss battle on the Xbox 360 version, which are now filled by these two characters? You pulled a stunt like this, and a stunt like Nightmare Train, so I don’t even want to know you anymore.

For these reasons alone you should really boycott this series now if you weren’t already. If you were, then kudos to you for already realizing that every game in the series is the same damn game. No wonder the studio announced big losses, and are facing the likelihood of bankruptcy. I’m glad that it isn’t just good studios (like Cing) that go bankrupt.

If you’ve played any installment of the Tales of series, then you’re probably already aware that the battles are fought similar to a regular fighting game, set on a two-dimensional plane. It makes a very nice break from the turn-based shite that plagues the RPG genre, but it has been in every Tales of game since the first one. It gives nothing to the game that we didn’t already have in Tales of Phantasia, Tales of Destiny, Tales of Eternia, Tales of Symphonia, Tales of the Abyss, Tales of Versus or Tales of My Ass. 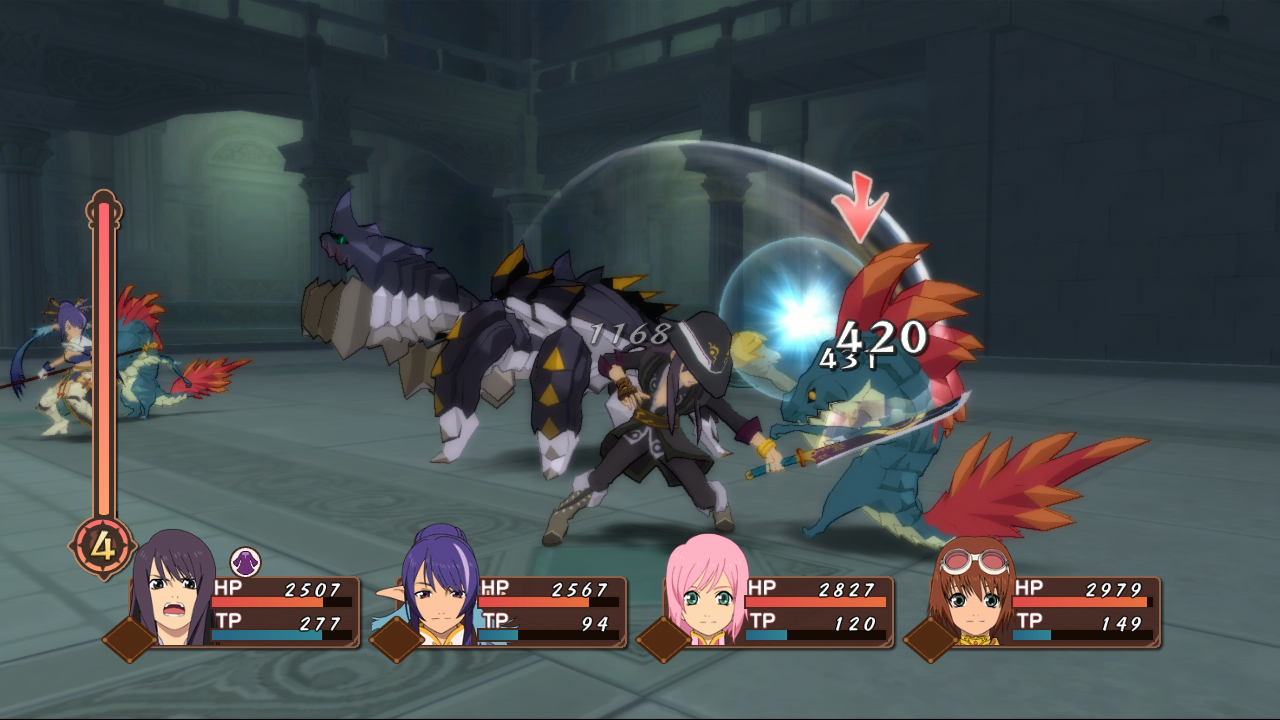 If there’s one thing that’s terribly hard to fault, it’s the overall presentation. We know that this is Xbox 360 from the smoother frame-rates, the high-definition visuals and the crisp audio quality. There has been no skimping on the graphical side whatsoever. The cel-shading goes a long way to help hide some of the low poly-counts here and there. All menu interfaces are clean with changeable fonts. The graphics are incredible—the kind of cel-shaded and luscious painted effect that was used in Another Code: R, and similar to Valkyria Chronicles.

The soundtrack is the best part of the whole game. Why such a charming soundtrack (one that can easily be described as “full of life”) can be written for such a terrible game leads me to question the existence of an all-loving God, because He wouldn’t do this to me! The battle themes get consistently better with each act of the story, piling on more of that “experience” and “growing up” feeling you get during a role-playing game.

And the voice-acting is reasonable. My favorite characters (Yaegar, Rita and Raven) are all voiced very well, with accents that suit their character and appearance. Yuri Lowell’s voice acting is almost perfect. Troy Baker provides Yuri’s voice, but has more recently been the voice of Snow Villiers in Final Fantasy XIII, which is another good RPG for those who aren’t interested in having any storyline whatsoever. 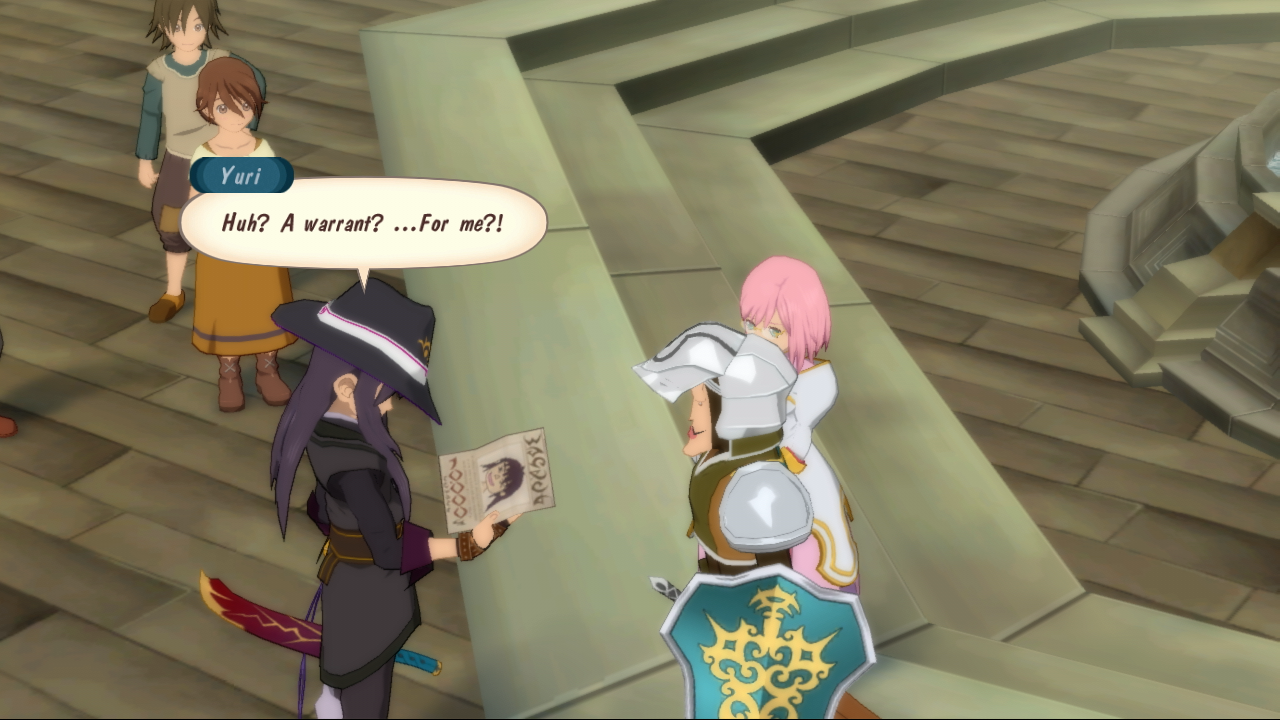 So, the problems? Well, other than being a bloody beta version wrapped up in a fancy box? The lack of story, really, and the lack of creativity. A lot of the time, the characters don’t get up to much, and although they develop, it’s like they still think the sun shines out of each other’s asses. The characters are lovable and the story is held together mostly by them, especially when you’re really lost as to where to go. The skits are funny and come at regular intervals, but they’re not enough to redeem the game from its massive problems.

It’s got soul, charm and appeal, but it’s also got just about every trait characteristic of RPGs that I just can’t stand. Tales of Vesperia is the kind of game that only the hardcore JRPG audience will really enjoy fully. There are good characters and great moments, but they exist amidst the dull hum-drum that only the serious players can withstand.

Tales of Vesperia is hard to recommend, because it is the gaming equivalent of singing silly a capellas on YouTube. All I can truly say is “download the demo off of Xbox Live”. Get a feel for that fighting engine. Then, if you like it THAT much, don’t buy it for any sort of hefty price. Bargain bin or borrow from one of your mates, that’s fine. It isn’t awful but…damn, it could have been so much better, if the story tried a little harder!