Tom smiled as he hit the gas, feeling the kart stir below him as he accelerated. This time, he thought, she’s done for. There’s no way she can beat me at Mario Kart 64, especially not when I’m using Toad. Tom felt like his luck had finally started to turn around, as the game had randomly picked the plucky Mushroom Kingdom citizen as his avatar, while Alli had been stuck with Bowser. Between his expertise in the game and his good fortune in character selection, Tom knew all he had to do was sit back and let his instincts kick in, and victory would soon be his. I almost feel sorry for her, Tom mused snidely. Almost.

As he slid around the first turn, he neatly edged past the computer-controlled opponents into first place, smiling to himself as his victory was all but assured. Grabbing an item box, he sighed as he realized it contained nothing more than a banana peel, but that was to be expected. In Mario Kart, only the racers in last place received the really good items, and it occurred to him that he should herald his banana as a good omen. Sliding around another corner, he increased his lead and heard the sound of the other racers dwindle in the distance.

The rest of the first lap passed without too many incidents: someone launched a red shell at Tom, but he was able to deflect it with his banana peel and then pick up another. A thunderbolt was used to make him annoyingly small, but, as it affected nearly every other racer as well, his lead was only marginally shortened. Lastly, someone had used a Boo to try to steal his item. He had just used his banana peel, though, so he merely laughed at the futile gesture and continued on his way. Halfway through the second lap, however, Tom heard an unexpected rumble behind him. Looking back he saw Bowser’s giant form bearing down on him, steadily gaining speed.

How the hell is she gaining on me as Bowser! Tom thought to himself. Looking back, he saw that she was even closer to him. “There’s no use, Alli! You’re never going to beat me! I’m the King of Mario Kart!” Alli made no response; she just continued driving with a grim determination in her eyes. Tom was beginning to panic; despite Bowser’s low acceleration and poor handling, his kart had the highest top speed in the game. It was only a matter 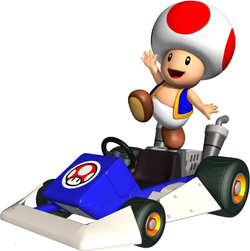 of time before she overtook him, and unless he was able to hit her with an item, her lead would continue to increase.Crap, crap, crap, need an item, need an item, need an item. He grabbed an item box, found a green shell inside and quickly tossed it behind him. Alli dodged effortlessly. Seeing a sharp turn ahead Tom felt relieved: his maneuverability would allow him to get his lead back while Alli would have to slow down to take the turn. Tom smiled, but his victory soon turned to ashes as Alli slid into the turn early, gliding tightly around the corner, which put her right on top of Tom.

Suddenly, Tom heard a CRUNCH and felt his kart lurch forward. Alli was using the considerable bulk of her character and kart to ram him, and he knew that Toad could never compare to a heavyweight like Bowser in a shoving match. Alli rammed him a few more times, making his brain rattle inside of his skull (or whatever mushroom people have under their caps) when suddenly she was right next to him. Tom expected a sneer or a derisive comment or some acknowledgement of his presence, but he received nothing; Alli kept her focus straight ahead, her entire world consisting of the track. Tom was about to yell at her when, with a flick of the steering wheel, Alli sent her kart careening into Tom’s.

The jolt sent him toward the edge of the track, his momentum betraying him as he was unable to stop quickly enough to avoid being stuck in the sand by the road. His wheels spun underneath him as he tried to regain his traction and reclaim the lead, but Alli had already moved on and was nearly out of sight down the track. Swearing, he hit the gas and steered his kart back to the track, trying desperately to catch up. It was no use. She had too much of a lead, and he did not have enough speed to catch her. Tom won second place in the first race, but resolved that he would beat her next time.

Tom did not, in fact, beat her the next time, nor the time after that. Every time he would start out perfectly, but halfway through the second lap Alli would always catch up, knock him off the track, and proceed to win the race. None of the items he picked up were helpful; Alli always managed to deflect or avoid them, or they simply were not enough to shorten her lead by any noticeable amount.

Finally, they arrived at the fourth race—the last in the cup. Tom knew he could no longer hope to beat Alli’s point total, but he was determined not to give her the satisfaction of a clean sweep. She thinks she’s so much better than me. I’ll show her…I’ll show them all! It occurred to Tom that he did not know who “them all” referred to, but at this point he didn’t care. All that mattered was beating Alli.

As the race started, Tom relaxed and allowed the other racers, including Alli, to zoom past him. Tom began to accelerate, but made sure to stay in last place, being sure to hit as many item boxes as he could. Finally, after 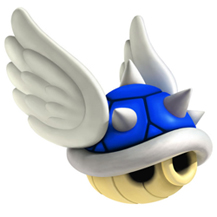 obtaining and immediately discarding a number of items, Tom found what he was seeking: the blue shell, the ultimate item in the game. Alli won’t be able to avoid this, he thought to himself, and when I stop her dead in her tracks in the middle of the race, she’ll never be able to recover! Having obtained his secret weapon, Tom began to rocket past the other racers using every shortcut and dirty trick he could think of. By the end of the second lap he was in second place with Alli in sight, exactly where he wanted her.

“EAT BLUE SHELL, BITCH!” he yelled, as he launched the Mario Kart equivalent of a nuclear missile. Alli looked back and then turned her focus back to the track ahead of her, seemingly indifferent to the azure death hurtling toward her. Poor girl, thought Tom, she’s either in shock, or she has no idea what’s about to happen. Tom’s smile widened as the blue shell closed in on its target, and he began to think about exactly what he would say to Alli as he flew past her on his way to the finish. Suddenly, though, Alli began swerving across the track, causing the blue shell behind her to do the same as it homed in on her. Just as it was about to hit Alli veered sharply to the right and hopped with her kart, causing the blue shell to narrowly miss her and careen harmlessly into a wall.

Tom’s jaw hung open in shock as his kart puttered to a stop. “She…she dodged a blue shell. You can’t dodge a blue shell. It’s impossible. Simply impossible.” Tom’s world crumbled around him; he might as well have just seen a pig fly or a talking potato. The other racers zoomed past him, and by the time he came to his senses the race was over, and he was in last place.

Tom found Alli in the Winner’s Circle, hoisting her golden trophy high in triumph. Due to his dismal performance in the last race, Tom had fallen to sixth place overall—enough to leave him alive in the game but not enough to get him a trophy.

“How did you do that?” he asked sullenly.

“Do what?” replied Alli.

“Dodge the blue shell. Do you know a special cheat code?”

“Nope. I’m just that good.” Alli’s normal condescending demeanor had returned, and she flashed him a sneer that seemed to say I’m better than you and you know it.

“No one is that good. You must have cheated,” said Tom defiantly.

“Heh, whatever lets you sleep at night, kiddo. C’mon, I think I feel another game loading.”

Paul: Hello everyone, and welcome once again to Digital Championship Wrestling! I'm Paul Franzen alongside "Captain" Eric Regan, and we are coming to you LIVE from the DCW Arena to bring you tonight's ...