Welcome to the Ten Reasons, where I discuss ten reasons why I like or dislike a game. This month, I’m discussing Mario & Luigi: Superstar Saga for the GBA. I’m told that this is the first game to star Mario and Luigi as co-stars since Super Mario Bros. That’s an obvious lie, because they were both in Super Mario Bros. 2. Who told me that? Stupid liar. Anyway, onto the ten reasons! 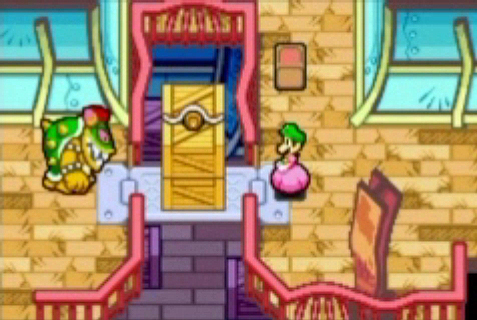 You know, I was excited about this game because Luigi stars in it. For one of Nintendo’s main characters, Luigi gets no credit whatsoever. He constantly gets pushed to the side in games, having been demoted from “Mario’s equal” to “easily forgettable comedic relief.”

So needless to say, I was excited about the idea of seeing Luigi come into his own for once. Sadly, even though you play as Luigi for 90% of the game, he is still second fiddle to Mario, serving mainly as the comedic relief.

But, hey. You know what that means? The main character is comedic relief! That means hours and hours of Luigi-based comedy. Luigi does a whole bunch of crazy, funny things in this game, such as get hypnotized, make and immediately lose a fortune, and disguise himself as Princess Peach, only to have his mustache give him away. It’s loads of fun. One of the most random moves in this game is the ability to turn Luigi into a surfboard. Mario then gets to ride Luigi across the ocean.

The obvious symbolism of how Luigi gets pushed below Mario is so poignant that the pathos evoked for Luigi (That’s right, pathos!) creates such a feel of realism so as to stir the soul of all who look upon it.  For, truly, are we all not like Luigi? Does not Mario stand on top of us, crushing us into the ground, forcing us to do his bidding, while at the same time, relying on us for his very existence?  Does not this great paradox of life speak to all?

…Or maybe it’s just something weird the game developers thought up. Either way, thumbs up. Right, the spin attack. Um, sorry, I don’t think the spin attack is really cool, but I needed another reason to make an even ten, so I just threw this one in here. I like the Queen Bean boss fight, because it’s the first fight in the game that’s actually tough. People like to complain about how games are way too easy nowdays, and it’s good to see that Mario isn’t following that trend.

Although, you know, it’s really annoying to have to restart your game five times because you keep dying on one particular challenge, and the Mario games are FULL of that crap. Maybe I should have put this in the reasons why I dislike the game. Oh well. Holy crap! There are Yoshis in this game! They only make a brief cameo, but who cares? Yoshis are awesome. When are they going to have a 3D Yoshi game? Or at least a 3D Toad game. Come on, Nintendo, pick up the pace! I demand games for every minor Mario character! Birdo looks nothing like a bird, by the way.

Speaking of minor Mario characters, Birdo makes a few appearances in this game. Remember Birdo? The first boss you met in Super Mario Bros. 2? The one that shot eggs out its mouth? That boss was awesome.

Anyway, that boss makes a reappearance in this game, and she uses an egg-based attack to hurt Mario and Luigi. See, now that’s good. It’s nice to see them use Birdo as a boss again. It gets boring to have to fight Bowser in every single game, and it’s good to see them break the monotony every once in a while. 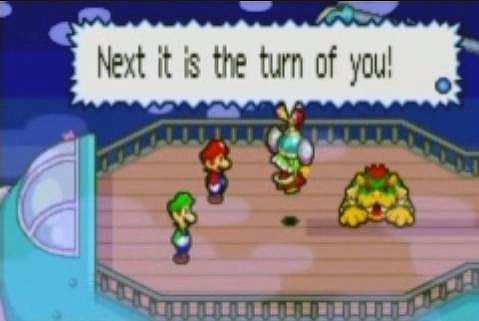 One of the bad guys in this game is Fawful, who is a stereotypical 1940s Japanese person. He has a large overbite and nerdy glasses and is of the talking with horrible accent.

It is really one of the most horribly racist characters ever seen in a Mario game, but since the game comes from Japan, nobody worries about it, just like how nobody worries when black rappers use the n-word 50 times per song. But still. Did they really expect to get away with such a blatantly racist character in a children’s game? Imagine what it’d be like if Mario games continued this trend and included more stereotypes in future games: I hate this boss fight, because it’s ridiculously unfair. Listen up, game developers! It’s OK if a boss fight involves beating more than one enemy, but for the love of God, DON’T give the enemies the ability to regenerate! All that does is make the boss fight last forever!

Let me explain how it works, in case you don’t get it. Once you kill Boss #1, you start killing Boss #2. While you do this, Boss #1 comes back to life. When you try to kill Boss #1 again, Boss #2 comes back to life. So you can never kill both Bosses #1 and #2, because as soon as you kill one boss, it comes back to life while you’re attacking the other boss. Meanwhile, Boss #3 attacks you the whole time. DO YOU SEE WHAT I MEAN? IF THE ENEMIES CAN REGENERATE, THE FIGHT NEVER ENDS! Speaking of boss fights that last too long, the Hermit Crab fight is a pain in my butt. The problem isn’t that it’s difficult; the problem is that it’s boring. You have to perform the same attacks around thirty times in a row to kill the boss, and that gets boring fast. The fight takes about twice as long as it needs to, because the boss can, ha ha, heal itself as often as it wants.

The fight also sucks because there’s a two-minute cutscene before it. And while the cutscene is OK, it is really annoying to have to go through the cutscene more than once. Which, of course, you have to do because it takes three or four tries to kill the boss. So in reality, you’re going to be performing the same moves on the boss about 100 times in a row, unless you get lucky and kill him on your first try.

This fight is a good reminder of why it’s important to rage against the mundane. One of the minigames you play is Chuckola Bounce. While it’s not boring or difficult, it’s disappointing because it feels like no effort whatsoever was put into making the minigame. The entire thing is kind of random, and the controls are somewhat awkward. All in all, it feels like something that got made in ten minutes. Really kind of a disappointment.

Well, that’s it for this month! See you next time, folks!

10. Dr. Mario (NES): Use drugs to counteract the effects of tripping with the first drugs you used! If you hadn't tripped, you wouldn't be seeing those bugs! I bet Mario himself was doing the drugging ...