The Tables are Turning

Well, it’s officially happened. After two and a half years of dating, I have finally succeeded in finding a videogame that annoys my gamer boyfriend as much as he hath done unto me. Incredible, I know. I honestly never thought it would happen, but here we are.

To be fair, Mike really has no right to complain, because it’s his own damn fault for renting me the game in the first place. Hell, not even just renting it: he suggested it. It all started a few weeks ago, when we were in Target, looking to spend a gift card that I had received for Christmas….

As we were perusing Target’s electronics section, I wandered over to the DS aisle, looking for something that might be worth playing. Sadly (because it is Target we’re talking about here), the pickings were rather slim. It was looking pretty bleak when I suddenly stumbled across an intriguing-looking DS game sandwiched between America’s Next Top Model and My Little Baby. It caught my eye because it was colorful, yet tastefully so, and “cartoony” without looking stupid. It was, in short, very different from the games surrounding it.

The title also intrigued me, because it sounded interesting and mysterious. Professor Layton and the Curious Village…hmm. A quick flip over to the back of the box confirmed what I already suspected: this was indeed a puzzle adventure game. As it happens, this is a genre for which I have a particular weakness, so I knew immediately that I wanted to try it out. 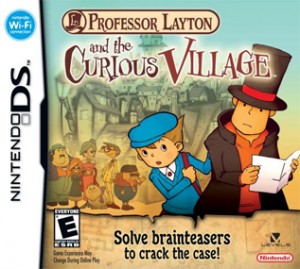 Of course, ever the conscientious consumer, I hesitated to buy something that could potentially prove to be horrible. Gift card or no gift card, I hate buying things that I might not like. I mean, you can generally at least read books or try on clothes before you buy them; but movies and games always carry a certain amount of risk. Unless there’s a demo station set up in the store, there’s really no way to try them out until you get home and remove the shrink wrap. At any rate, I wasn’t sure whether I wanted to take a chance on Professor Layton; so I bought a couple of movies instead, and Mike generously offered to put it at the top of his GameFly queue for me.

It took a couple of weeks for the game to make it through the mail, but it turned out to be well worth the wait. There really is a lot to make one recommend this game: it has beautiful artwork, haunting music, an intriguing story, and of course, puzzles, puzzles, puzzles! (So many puzzles!)

In an interesting departure from most puzzle adventure games, in which the puzzles are directly tied to the plot (think Monkey Island), the puzzles in Professor Layton are both independent of, and closely aligned with, the game’s story. And they are tricky. Initially, I worried that the puzzles would prove too easy to be challenging (this was a kid’s game, after all!). And indeed, the first few puzzles were ridiculously simple to solve. However, it picked up fast, and by the fourth or fifth puzzle, I started to realize exactly what I had gotten myself into.

The truth is, most of the puzzles in the game are damn hard. Half of them require a working knowledge of algebra and/or geometry, and all of them have a trick of some kind. Plus, most of the puzzles are “fill-in-the-blank” (maybe a quarter are multiple choice), so for the most part, I was pretty much on my own.

That said, I found myself able to rise to the occasion for almost every puzzle (I only Googled an answer once, I swear!). Some of them took a few guesses to solve, but I knew that, eventually, I would figure them all out.

So where did Mike fit into all this? Well, as you’ve probably figured out by now, Professor Layton is a game that requires a very high level of mental engagement. Each puzzle requires you to concentrate fully on the task at hand. As a result, I would spend hours playing the game, never looking up, never taking a break, and seldom responding to anything outside the little pink frame of my DS screen. 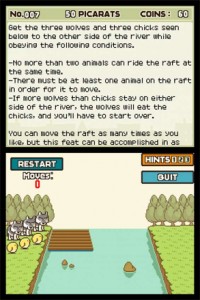 This really pissed Mike off. Like most gamers, he does get that distraction is an inherent part of gaming. However, he also thrives on attention, and left to his own devices for too long, he starts to get kind of antsy. Plus, he likes to talk. A lot. He doesn’t mind if I play a game that requires only half of my attention, because then I can use the rest to listen and respond to him. However, Professor Layton is the kind of game that doesn’t “share” well. More often than not, I barely heard a word he said, or I’d forget to respond, or I’d force him to repeat himself multiple times. Needless to say, this didn’t go over too well.

The only thing that really saved us was that Professor Layton is actually a rather short game. After about three days of intense playing, I finally succeeded in mastering every puzzle the game had to offer. Only then was I able to put the DS down and resume my normal life.

Looking back on it, I do feel a bit guilty over what I put him through. Overall, though, I think I will call this a “win-win” game. On the one hand, it is “win” in that I totally won it, and I am very proud of myself for doing so. On the other hand, it is also “win” in that I scored a major victory in the ongoing battle of wills that exists between Mike and myself.

I’d like to think that this little experience will make him rethink some of his own (more obnoxious) gaming habits…but I’m probably not going to hold my breath. A gamer is a gamer, after all, and I know my boyfriend. I can’t really win this little war we have going; but hey, at least I can screw with him every once in a while. It’s what keeps the game interesting.