Tom was depressed. Alli had not simply beaten him at Mario Kart—she had completely annihilated him. At first he tried to convince himself that she had somehow cheated, but the more he thought about it, the more impossible it seemed. How could she have cheated when she was actually in the game? Maybe it had been a glitch in the game itself, but even if it was, he had completely missed it while Alli had seen it as clear as day.

To make matters worse, Tom’s defeat seemed to have triggered the worst losing streak of his life. After Mario Kart it was Tekken, then Mario Tennis, and finally NBA Jam, and each game was increasingly embarrassing. In Tekken, Tom barely landed a hit on Alli, but he at least managed to get her down to fifty percent health once or twice. Mario Tennis was worse: playing a tennis videogame from inside a game was very much like playing tennis in real life, in that it was exactly like it. Tom had only played tennis once or twice in his life, while Alli seemed to be a pro. NBA Jam was just humiliating. Basketball was Tom’s worst sport to begin with, and he spent the entire game losing the ball to Alli’s team and then pathetically huffing and puffing up the court chasing them. He didn’t even manage to score a single point.

“Rick, I don’t get it,” Tom muttered as he sat dejected on the sidelines, watching Alli sprint effortlessly up the court. “How the hell is she so much better than me?”

“What, you think a girl can’t be better at videogames than you?” 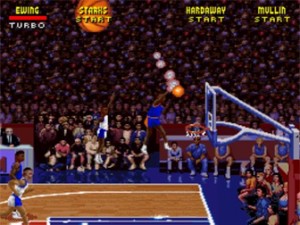 “No, no, no…OK, maybe a little bit. But mainly, I mean, how can she be so EXCEEDINGLY better than me? I mean, I’ve been playing videogames all my life and I know I’m not the best, but seriously? This is ri-goddamn-diculous.”

“Maybe she just has had a lot of practice.”

“Heh, it would be just my luck to get sucked into a computer with the only person more obsessed with videogames than you.”

“That wasn’t a compliment. It was more self-deprecatory.”

“HEY LADIES!” shouted Alli, walking over to Tom. “ I don’t mean to cut your existentialist pity party short, but I just won, and it looks like the system is starting up a new game.”

“Wonderful. I wonder how I’ll be disgraced this time,” Tom replied.

“I don’t know yet, but I’ll try to surprise you.” Alli grinned at him menacingly.

The flash of light enveloped Tom, and he suddenly felt much lighter. Tom realized he was flying…and glowing. Confused, he turned around and was confronted by a gigantic monster, dressed in green. Preparing to defend himself, he was surprised when the giant gave him Alli’s signature condescending smirk.

“Awww, look at the little fairy. How cute…and appropriate.”

Tom looked at the behemoth in front of him and realized that it was indeed Alli. She appeared to be a young boy, still giant to him, with green clothes and cap, blond hair, a sword, and a shield. They appeared to be in a giant hollowed out tree, inexplicably filled with torches and giant skittering spiders.

“Awwwww, COME ON! We’re in the best game ever made, and you get to be the hero? What the hell?!”

“Ohh, I think one of my brothers had it. I’ve never played it, though.”

“WHAT?!” cried Tom and Rick in unison.

At that moment a small piece of both Tom and Rick died.

“All right, just so we’re clear on this: you’ve NEVER played a Zelda game?” asked Tom.

“For the HUNDREDTH TIME, NO!” replied an irate Alli. Typically, when someone uses the term “for the hundredth time,” they are exaggerating. Alli, however, was being quiet literal.

“All right,” interrupted Tom, “I just want to go over this one more time. You play videogames in your real life, yes?”

“And, judging from your performance in the past few games, it’s safe to say that you’ve been playing them for quite some time and have played a good number of them, yes?”

“All right Alli, now that we’re alone, you can level with me. Have you SERIOUSLY never played a Zelda game?”

“No, no, and NO! I have never played Zelda, and if you keep asking me, I’m going to kick your ethereal little ass!”

“All right, all right. Fine. It’s just that never playing Zelda is like the gamer equivalent of living under a rock for the last twenty years. At the bottom of the ocean. In the Mariana Trench.”

“Yeah, yeah, whatever. Can we just get on with this, please? What the hell am I supposed to be doing here?” “Well, you’re Link, and you’re supposed to save Hyrule, and to do that you’re first supposed to collect three gems so you can get to the Triforce, also known as the Power of Gold, in the Temple of Time. You see, Ganondorf, King of the Gerudo Tribe, has been amassing his power and spreading darkness throughout the land. The Great Deku Tree, which we’re inside of right now, has been your guardian for….”

“I didn’t ask for a history lesson; I just want to know how to play the game.”

“Fine, you philistine. Go through the dungeon, solve the puzzles, beat the boss, and get the treasure. “

“That’s better. By the way, what the hell are you supposed to be?”

“I’m your fairy companion, Navi. I point out things of interest and give you clues.”

“Awww, how cute. You get to be my sidekick. Well, let’s get going, sidekick.”

This title was my first real taste of video game disappointment.