When Paul told me that I was reviewing Chrono Trigger, I mean fucking Chrono Trigger of all the games, I was pretty skeptical on the whole thing. I’ve got no problem reviewing regular ol’ videogames, games that aren’t legends, games that haven’t changed peoples gaming experiences across the globe. It’s not unheard-of to say that Chrono Trigger is the greatest video game ever, and even more common to hear people say it’s the greatest RPG of all time. Now, there’s an assload of games out there, so many that I don’t even want to try to wrap my brain around which is the best. So many categories to be taken in to consideration…graphics, gameplay, controls, sound—oh wait, I’m supposed to be reviewing Chrono Trigger here. But honestly, the Goddamn game is easily one of my favorite games.

My history with CT is strange indeed. 1995, I stroll in to my local Video Stop with my mother to rent some entertainment. As I made my way to the SNES section, I couldn’t help but notice a new game; a game with a spiky haired kid battling monsters on the cover. Who couldn’t rent it? So I brought it back to my pad, and in the ignorance of my youth I played to as far as I could get until the game had to be returned. And those were the few weeks when I was so far beyond depressed that no doctor could diagnose what ailed me…no doctor except my buddy Greg Sinko (he doesn’t really have a PHD). I stole, erm, borrowed his copy of Chrono Trigger until it was beaten. Yes, that is how good this game is, to bring one to steal from a friend. 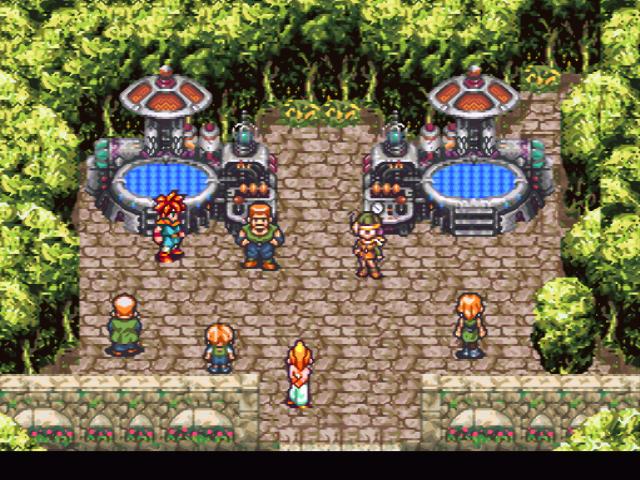 On to the review. Graphically, this game is superb and especially for its time. Environments are finely detailed and do a great job of getting you into the game. The music is also another high point for the game. I wish I could tell you who created it, but CT is well-known for its quality soundtrack, and with good reason. Combine the outstanding (SNES-wise) graphics and the amazing music tracks and you’re all set.

However, the graphics and sound are only classy additions to the simply amazing storyline that Chrono Trigger wields. For those unfamiliar, the game is an epic tale of time travel combined with medieval sorcery. Crono is a normal kid living in the present, normal until he runs in to Marle, a princess with a pendant that has some kind of strange effect on the space-time continuum. When she messes with a new transportation device designed by Lucca, Crono’s friend, things go out of control and she’s thrown in to the past. Love-struck and always one to be a hero, Crono goes after her and so begins their story when they stumble upon the apocalypse, brought about by a planet-eating monster called Lavos.

Chrono Trigger’s character development and plotline progress cleverly, and somehow make sense of something that hardly any other game has tried to tackle to this date: time travel. The game boasts six different eras in the history of the fantasy world that it takes place in. There is 1000 AD, where all is normal and well; 600 AD, a medieval era with swordsman and Olde English; 2300 AD, the future after the apocalypse; 1999 AD, which is essentially the year of the apocalypse; 65,000,000 BC, the prehistoric realm; and 1200 BC, a time when magic thrived and knowledge reigned. Each of the different time periods has its own story, and each plays an intricate part in all parts of the game. What’s really impressive about CT is how many things remain constant throughout all of the game, and the interaction between periods that can occur. To complete different tasks, you must truly manipulate your ability to travel between the ages.

And then there is the innovative battle system. Like all RPGs, Chrono Trigger uses levels, magic, and weapons to create a character’s stats. Each character you control has a different element with which to use magic, such as fire, water, lightning, etc. But what’s truly different about the fighting system in the game is the Tech system. Each character has their own set of Techs, and when used alone is a Single Tech. At certain levels a character reaches, they can learn Double Techs, which are special techniques that two characters perform to do more damage. If you really want to do an assload of damage, you’ll need a Triple Tech, which takes advantage of all three characters in your party and makes one awesome attack. The Tech system really makes the character combination of your party a big part of the game. 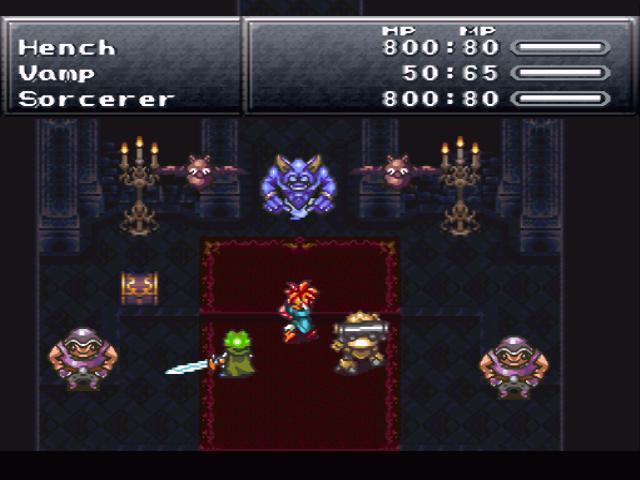 Chrono Trigger really has everything a gamer could want from a game. Superb graphics, great soundtrack, unique characters, and an unforgettable story. Once you start playing this time-traveling epic, it just might bring you to thievery amongst your friends. If you haven’t played Chrono Trigger, go check it out. It truly is a timeless classic.

Our predictions went five-for-eight at least year's WrestleMania, missing only a Money in the Bank mishmash, a Match of the Year candidate, and the main event. So basically, we nailed 'em all 'cept th ...