This game has confirmed what I have always suspected to be true: hot air balloons are NOT a reliable method of travel. As proof, your character in Wandering Willows, as molded by you to resemble yourself, your favorite hero, or Alyson Hannigan, has crash-landed on a mysterious island after a bird flew into your hot air balloon and destroyed it. The fate of the bird is unknown, but, fortunately for you, there was an island underneath. Otherwise you would die of starvation floating around in the ocean, which would make for a very poor game indeed.

PlayFirst, a quirky company you might recognize from Diner Dash if you’ve ever helped Flo in any of her incarnations (incarcerations?) of restaurant entrepreneurship, has entered the adventure-RPG realm with Wandering Willows. Your goal is to get off the island, and, to do so, you need to complete several tasks, like repairing the basket and patching the balloon. You also have to acquire several items from the island residents you probably should have had in the first place, like a telescope, a radio, and a compass. To accomplish these things, you will have to become friends with all the strange and unusual inhabitants, and there is no better way to do that than by doing them favors and becoming a part of the in-game economy. 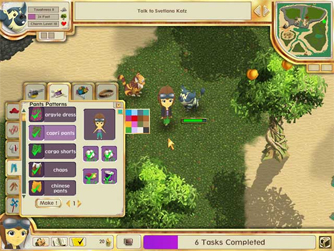 Also, you have a pet that has started following you around. He looks a bit like Eeyore with spikes. Good thing here’s there, too, ‘cause you will need him to climb trees to collect fruit, dig up holes to unearth collectable resources, and charm other animals. To say nothing of the dietary habits of the local fauna in Wandering Willows, charming an animal results in it…”dropping” wool, eggs, flower seeds (in their original packets), recipes, or precious gems. Yes, gamers, sometimes the animals poop diamonds.

All these items you collected (and I hope washed off) are then used for the completion of quests. Someone wants a candy bar? You farm some materials, buy some milk, find some cocoa beans, and before you know it, you have a new best friend. It’s a little bit like Harvest Moon, a difficult comparison to avoid making, but without the agonizing day-after-day grind of farming. You can also collect other animals via the eggs that are dropped, which have different stats and different bonuses that can be applied to your in-game actions. As you complete quests, more areas are opened up, revealing more characters, more resources, and, of course, more quests.

All this is quite fun, and it only becomes tedious toward the end of the game, when you need 12 coffee beans and you’re lucky if you find one your pet doesn’t eat. The NPCs in the game are interesting, and while nothing in the story is laugh-out-loud funny, the stereotypes, personalities, and voice acting are enough to keep you entertained. The dialogue does become a bit strenuous to read, and, from time to time, I found myself skipping past it just to find out that I needed more coffee beans.

The graphics here leave a little to be desired. While the environments are very well crafted, the characters are stylized with giant melon heads and stick-thin bodies. While technically done well, I found them to be a bit aesthetically unpleasing. A sizable portion of this game is tailored to customizing your character through clothes patterns you find and buy in the game. While the outfits all look well-designed and can be made in a variety of colors, I found little reason to make them, other than to sell them at the store for a higher price than the raw materials. That being said, my character seemed to be content walking around in his underpants. 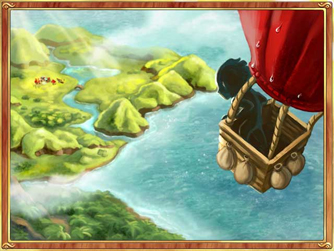 The controls for the game are laid out very well and are extremely fluid. Click to move, click to dig or pick fruit, and click to talk. Navigation around the island is simple and easy, and when things start to be too far away to walk to them, you are given the ability to teleport. Menus are easy to navigate and click through, and everything you need is generally well laid-out and easy to find, with some tiny caveats. Finding quest turn-ins is very simple, as you click on a gold star on the world map and your character simply walks there from wherever you are on the island (WoW, please take note).

The voice acting is good. It’s not going to win any awards, but the voices match the characters and never detract from the experience. The music, while simple, is subtle and drifts into the background. There are not many songs, and some excellent behind-the-scenes work has been done in making a small piece of music that is not repetitive and annoying. Once you’ve completed all the tasks on the island, you can leave or continue to earn some achievement medals for tasks that would require a tenacity I am not entirely sure I have.

While Wandering Willows is a lot of fun and is an addicting game, it’s not for everyone. The game takes a few days’ worth of dedicated play to finish, which means you definitely get your value for spending the money, but, admittedly, some gamers will not have the fortitude to dig hole after hole after hole after hole to find a few needed gold bars. Even if you do not have the time to grind the game out in a few days, it’s still worth playing. The simplicity and ease of navigation means you can drop out and pick it back up a week later without any trouble. The game is completable, as well; with so many games losing my interest before finishing, Wandering Willows does some major things right and makes this a game well worth your time.

...are definitely not these.