Last month I talked about the Sly Cooper series as a way to help out gamers looking for good games they can get on the cheap. This month, I’ve got another one, but this time, it’s absolutely free. Well, unless you paid something to join Facebook. If this is the case, please let me know, as I have some items in the aforementioned game that I can sell to you for pretty cheap.

Anyway, I’m talking about the Zynga game on Facebook, Mafia Wars. Anyone can join; you just need to have a Facebook account. There are three classes you can choose, and depending on your class, you recuperate specific stats faster. Fearless mobsters regain health quickly, Maniacs regain energy, and Moguls regain stamina. So what does that mean? Health is obvious, so we’ll skip that. You need energy to do jobs, which give you money and experience points, and sometimes even loot. Stamina affects the number of times you can attack someone. I’m Fearless, but I think if I could change, I’d be a Maniac, because I seem to use more energy than health. Go figure. 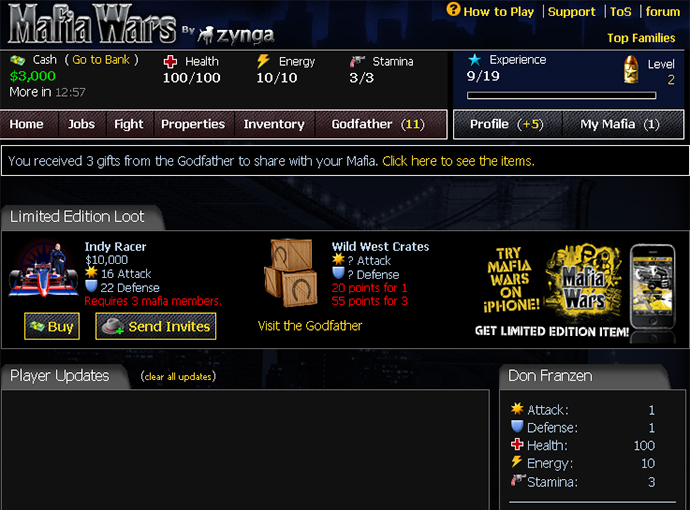 So, the point of this game is to level up until you’re top dog and no one wants to mess with you. There are different levels, ranging from common street thug to don. (Or something like that. I haven’t unlocked the highest levels yet.) You make your way to the top by completing jobs, fighting other mobsters, being a hired gun, buying property, and collecting items. The higher the level, the more energy is required, the more items needed to take on a job, etc. Basically, this game is great for those completionists who love gathering as much rare loot and other crap as possible. It’s also a great game for people who just like mindless leveling up. Personally, I’m one of the latter, and I really enjoyed the first week or so of playing this game. However, I’m starting to see some flaws that are making this dame want to throw in her towel.

First off, it’s a game where all you do is level up. Even I like the pretense of a story when all you’re really doing is leveling up (see my Final Fantasy XII review). Secondly, it’s one of those titles that remind us of high school, and the one game that most gamers don’t usually do so well in: popularity. You recruit mob members from your friends on Facebook, and any friends who already have a mobster account will automatically join your mafia family. You can send out invites to your other friends, but they have to make accounts in the game before they show up in your ranks. So, what does this mean for you? Well, if you friend everyone on Facebook who asks and you have over 300 people, chances are you probably will have a fairly large family. If you’re a bit more selective, you’ll have a smaller posse, which poses bigger problems.

You see, your family isn’t just there to listen to you brag about your achievements. Your family is there so that if a job goes bad, you have some backup. If you get sucker-punched, robbed, or snuffed, you have a greater possibility of warding off further attacks because you’ve got your buddies and their arsenal backing you. See how this could be a problem? Even worse, the other players can see how many members are in your family, so those with fewer family members are bullied more often. 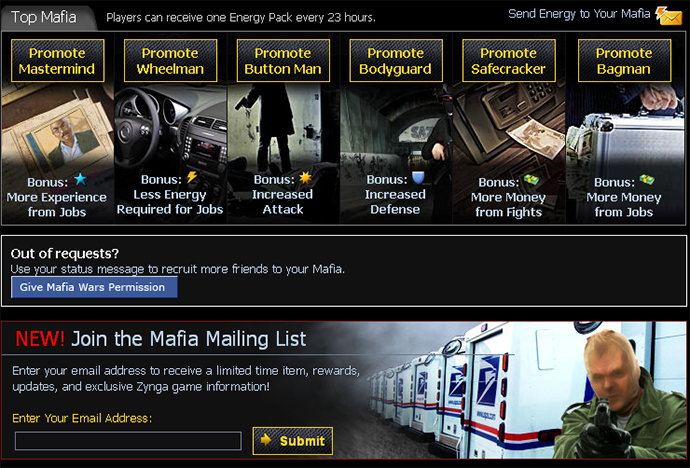 Don’t get me wrong. It’s been amusing, and I’ll probably keep playing for a bit longer. However, since I’m starting to get into levels where the people I’m up against have at least 100 members in their family against my 11, the game’s starting to lose its appeal. Now, granted, I could pay money and advance my character to a point where I don’t need to worry about getting hit every time I look away. I could also buy bigger weapons, faster cars, and even more family members. But what’s the fun in that?

My overall opinion? If you’ve got time to kill, you like leveling up, and you’re a Facebook fanatic, give this a try. It doesn’t have the gratuitous violence you might expect from a game involving the mafia. If you want fun interactive violence, pick up Dynasty Warriors or Star Wars Battlefront. Really, I suggest saving your time and playing something more fun, like Sly Cooper or Final Fantasy XII. If you do decide to join, please refrain from robbing, attacking, or putting a hit out on me, or so help me I’ll sucker-punch you.

The new Game Boy Advance SP, or G-BASP as I enjoy writing it, is quite an improvement upon the original. Although the original GBA was pocked-sized, depending on your pockets, this baby is even more ...