The year is 1990. George H.W. Bush is in office, the Teenage Mutant Ninja Turtles are the biggest thing around, and a young Michael Ridgaway is playing a A Boy and His Blob on his recently acquired Nintendo Entertainment System. He is thoroughly perplexed as to how the game should work, and his various tip books and magazines offer only scant pieces of advice. Soon the game will be returned to the video rental store and will go down in his memory as an undefeated enemy, forever to haunt him as a dense and unknowable mystery.

All right, maybe that’s a little melodramatic, but that game required far more brain power than my little frame, though already incredibly advanced and sexy for a seven year old, could muster. In the game, you played a boy exploring the caves beneath your house with your faithful alien friend Blob, an amorphous pile of white goo able to change into a wide variety of objects when fed jelly beans. The end goal of this was to collect treasure so you could buy more jelly beans, then travel to the home world of Blob and defeat the evil tyrant who had taken over the once-peaceful planet. The main hitch, however, was that there was no manual, so I had no idea what the jelly beans did and would just spend 10 minutes staring at a room in confounded frustration, only to quickly expire or trap myself when I tried anything. Also, I would get hopelessly lost in these caves, unable to find my way out before I died and had to start over. Throughout the years I sometimes considered going back to it, but there was always something newer and more fun that I would rather play.

So when I heard that Wayforward Technologies was releasing an updated version of the game for the Wii, I saw it as an opportunity to lay some old ghosts to rest and resolve my longstanding grudge with its predecessor.  To be honest, I’m not sure it was worth it, and here’s why:

• I expected this game to be over WAY earlier than it was. From the outset, the game seemed like it would take no more than three or four hours to beat, but that eventually turned into 8-10 hours. By the time that happened I was already involved and wanted to keep going, but all I really desired was to get the damn thing over with. 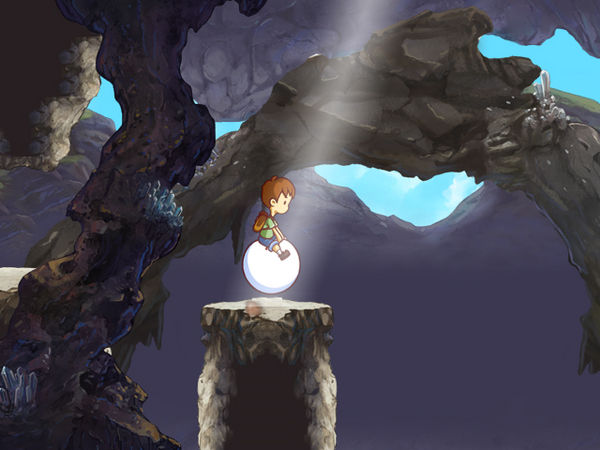 • Twitchy controls. Nothing can ruin a game like twitchy controls. The boy always seems to be accidentally falling off ledges, hitting spikes or enemies (one hit still kills him), or otherwise mucking up my idea on how to solve the puzzle at hand. Add to that the fact that there are a number of bosses that require quick reflexes, something that the Boy is severely lacking in, and you have a very frustrating situation.

• The Blob is constantly falling behind or getting lost, and to retrieve him the Boy must whistle or call his name three times in a row. This happens every thirty seconds or so, especially in the later levels, and will make you want to stab your ear drums out so you don’t have to listen to it anymore. Imagine if Navi from Ocarina of Time and Baby Mario from Yoshi’s Island had a super annoying kid, and you would have The Boy.

That being said, I will admit there are a few things to recommend this game:

• A lovely visual and musical style. The graphics are whimsical and succeed in evoking childhood memories of the original while being crisp and colorful. Albeit some of the backgrounds, specifically those of the Blob’s home world, can be a little creepy looking, for the most part the game is quite pretty to look at. Additionally, the music is quite well orchestrated and tailored to fit each stage, from soothing melodies for the early, slow-paced forest levels to up-tempo, vivacious allegros for levels where the Boy is zooming around in a bubble or on a rocket.

• A much improved learning scale. In this version, the Boy receives an infinite amount of jelly beans, but certain jelly beans are only available in certain stages. Along with a description of what each bean does, this allows the player to learn and practice with each of the Blob’s abilities without worrying about the immediate threat of failure or death. Additionally, helpful signs placed throughout the game instruct players when a certain type of bean might be helpful, which is especially useful when a new bean is introduced or when the player is stuck.

• Lots of extra stages. I wasn’t really in the mood for these, but for fans of puzzle platformers I’m sure this is a welcome feature. Each main story stage features three treasure chests, and finding them all will unlock a bonus puzzle stage, effectively doubling the amount of play time. 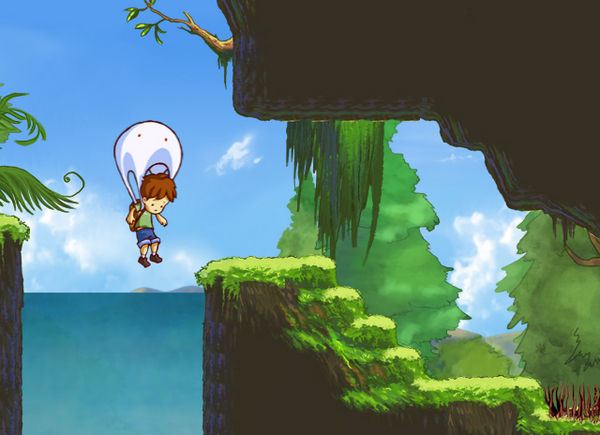 • Two awesome final stages. I was really ticked off when I found out there were some additional main story stages after the end boss, but was relieved when I found out that I was suddenly in possession of the JELLYBEAN OF DOOM. It was a nice way to end the game and kept me from being completely disappointed by having to commit more time to a game I thought was done.

So overall, I think this is a good game, but maybe just not one for me. Fans of the original and/or fans of puzzle platformers will probably love it despite its flaws, so if this describes you I’d advise you to go ahead and give the game a try. Otherwise you might want to skip this one, because the sound of that kid’s voice is going to drive you insane after a while.

Math Sniper 3D could have saved my life when I was in third grade, but it just had to fall into my lap twelve years too late.