There’s been something of a retro revival in videogames lately. Whether it’s in the form of an old favorite being given a new coat of paint (Bionic Commando, Punch Out!!), or a new game being given an old coat of paint straight from the rusty cans that have been sitting in the back of the garage for the last two decades (Mega Man 9), opportunities abound for those seeking a nostalgia trip. Indeed, these retro remakes bring us back to an exciting, adventurous era: when games were not “beaten” but “solved”, when progress was not “saved” but recorded in a 500-character “password”, and when our parents did not ask to join in a game of “Wii” but instead shouted down the basement stairs for us to “pick up all those damned Nintendo tapes”.

The Dark Spire unabashedly skips right over this nostalgic era, and instead firmly plants itself in a mysterious primordial period of gaming history, one that is likely to be foreign to all but the most ancient of gamers. This was a time before you heard the phrase “RPGs are all about story” bandied about, and the genre was instead all about mindlessly slogging through room after room in search of more and better loot, killing the same monsters again and again for more experience points and gold. In other words, it was a lot like WoW, if that helps any of you daggum kids make more sense of what the hell I’m talking about. Actually, who am I kidding, even I wasn’t really in on things back then…so let’s embark on this mysterious journey TOGETHER. 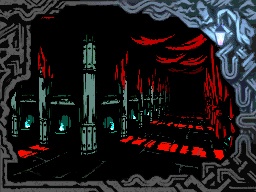 The basic gameplay in The Dark Spire is similar to early dungeon crawls such as Wizardry, The Bard’s Tale, or Atlus’s own in-house revival of the classic dungeon crawl genre, Etrian Odyssey. You assemble a band of adventurers from a selection of class types, carefully outfit them with weapons and armor, bravely venture through the dark gates of the dungeon, and then watch in horror as the mutilated corpses of your party are promptly ejected a few seconds later. You will continue to do this until at least one of your party members is ejected merely as a limbless, eyeless, but still barely breathing torso. This lone survivor can then drag himself through the dusty streets by his tongue until he reaches the temple, where, with his last dying breath, he can demand an explanation from the gods, who will respond by feeling a little bit guilty and bringing your party back to life, now at Level 2. Repeat.

But whereas the brutal carnage in Etrian Odyssey is softened by a bizarrely cute anime aesthetic, The Dark Spire has a decidedly more Western vibe to its visuals and setting. It’s difficult to precisely define what makes for a “Western” vibe, so an example of the difference may be in order: Etrian Odyssey has lots of spiky hair and what appear to be 5-year-old girls wielding giant swords; The Dark Spire has more beards, and the only little girls in the game are evil dolls with half of their head missing. I suppose The Dark Spire shows a few signs here and there that it was made by a Japanese developer: David Bowie does make a guest appearance, after all, as mandated by Japanese constitutional law.

Actually, on the subject of visuals, the graphics in The Dark Spire are quite good for this sort of game. Granted, the enemies have absolutely no animation whatsoever, but the art itself is quite appealing and distinctive. The soundtrack is also of surprising quality with a rather catchy leitmotif (Pretentious Word of the Day Alert), and Atlus has included a bonus soundtrack CD in the package as their latest ploy to get you to buy into their marketing strategy of publishing nothing but weird games that no one has ever heard of. All around, the production values are quite high. 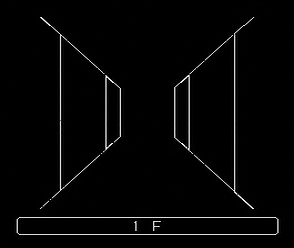 This is, of course, assuming that you’re playing in “Modern Mode.” If you press Start at any time, you can open up an options menu that allows you to switch the game to “Classic Mode.” The synth rock will cut out and be replaced with beeps and boops; the detailed textures of the corridors will melt away and be replaced with empty black space punctuated by white lines to indicate walls and doors; the vibrant enemy art depicting a dynamically posed dual-wielding Grave Robber will be replaced by a small sprite of an unarmed middle-aged gentleman with poor posture. A screenshot of this mode is prominently featured on the back of the case for the game—in fact, it’s the only non-battle picture. The clerk at GameStop stared at it in stunned disbelief when I brought the game to the counter, almost offended that such a thing could exist in this day and age. Yes, you can basically “turn off” the graphics in The Dark Spire for the ultimate retro experience. In an apparent nod to the graph paper industry, you can likewise disable the button that shows the automap.

There are a number of not-so-optional retro elements to the gameplay. Take, for example, weapons and armor. Their effects are only vaguely described at best. The “AC Bonus” of armor is listed, but weapon damage is not, nor are you really told exactly how weapon damage and AC interact. You are therefore left to guess at the relative effectiveness of weapons based on their price, and even this isn’t completely reliable. Looking at the list of weapons available in the shop at the beginning of the game…

… Based on price and your knowledge of stereotypical Japanese ethnocentrism, you might naturally assume that the Katana is mind-blowingly awesome. INCORRECT. The best weapon on this list is the Estoc, which you probably didn’t even pay any attention to because you have no idea what an Estoc is. (It’s a stiff anti-armor thrusting sword with a blade of triangular or diamond-shaped cross-section…dumbass.) It’s not just slightly better than the Katana: it actually does almost TWICE as much damage. Caveat emptor indeed. 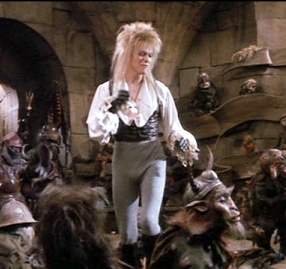 I couldn’t get a good screenshot of the part where David Bowie reprises his role from Labyrinth, so I figured I’d just use a shot from Labyrinth and hope nobody notices.

This really doesn’t matter that much, however, because physical attacks take a back seat in the second half of the game to offensive magic. Enemies can come at you in up to four groups per battle, and each group can have up to nine individuals within it. So that’s 36 against your four heroes, which can make for a very long fight if you’re sitting there plinking away with your weapons turn after turn. Far better to just end it with a single spell…and then do the same for the next battle…and the next one. I imagine that the strategic planning for most battles goes something like this:

WARRIOR: All right, they’ve got us outnumbered. I’ll take up position in the front line, and I’m going to need an armor boost. Next, we’ll want to take down the warlock in the back row as quickly as possible. Then, we’ll need someone to—
MAGE: HEY.
WARRIOR: Yes?
MAGE: I just cast Extinctio on the monsters. They’re all dead.
WARRIOR: …
PRIEST: …
THIEF: …
MAGE: Is there a problem?
WARRIOR: There’s no “Extinctio” in “TEAM”, Gary.
PRIEST: Yeah, Gary, what the hell?
THIEF: What the hell, man?

In fact, the balance is tipped so far in favor of offensive spells that you’ll probably want to dual-class all your characters as mages when the opportunity presents itself (except for your mage, who you’ll dual-class as a priest). At that point, planning really goes something more like this:

OK, I guess what I’m getting at is that the combat in The Dark Spire is a bit simple, and a bit broken. Thankfully, it can also be ended rather quickly (by spamming Extinctio, if I haven’t made that clear enough yet), and the encounter rate is fairly low compared to other games of the genre. You’ll have a tough time starting out, but once you get over the initial hump, you’ll be steamrolling over monsters in no time…except for the occasional ambush on later floors, where your entire party will be killed in a single turn by breath attacks. But that’s really a trifling detail. 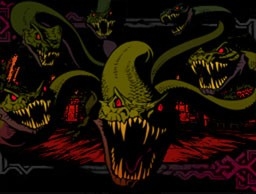 So what then is the draw of The Dark Spire, if not the combat? Why should you pass up the greater class and skill variety of Etrian Odyssey in favor of casting Extinctio every turn for 40+ hours? Well, The Dark Spire has some nice things going for it in terms of non-combat gameplay. Whereas Etrian Odyssey pretty much consists of nothing but random-encounter-monster-genocide from start to finish, The Dark Spire actually has some decent puzzle and exploration elements. There are a lot more hidden doors and secret passages to find, objects and characters to interact with, switches to pull, and warp tiles to test your cartographic skills. These puzzle and exploration elements are wrapped up in some rather well-done flavor text and dialogue—some of it quite humorous, with odd references to everything from Monty Python to Star Wars.

Despite its odd quirks and its tendency to be almost too retro for its own good, I found The Dark Spire an interesting and reasonably enjoyable experience. It was perhaps at times more “interesting” than “enjoyable”—like all turn-based RPGs, it can start to get a bit stale and tedious in the later parts of the game, and you’ll eventually be begging the damned thing to just end already. Replay value is also virtually nil—there’s really nothing significant to be gained by playing through with a different party combination, or anything in the way of alternate paths you can take. But the art and music are good, there’s a bit of humor, the exploration is fairly engaging, and some of the puzzles give you a nice fuzzy “Oh ho ho, I’m so smart” feeling.

So would I recommend it? Well, actually, no, unless you’re really into this sort of game or just want to be able to say, “Oh, classic dungeon crawls? Why, yes, I’ve played my share of those,” should you suddenly find your old-school status challenged (which can happen ANYWHERE, ANYTIME). There’s probably more enjoyable things you could be doing rather than galloping up and down the same corridors again and again. A very niche product, only for those who possess the hardest of cores and the oldest of schools. (Or who just want the free soundtrack.)

NOTE: While one may think that the “Novelty” score should be 0 based on my description of the game, I would argue that the game’s total lack of novelty is in itself quite novel, at least in a sort of artsy-fartsy postmodern way.

All right folks, I just have a couple things to clear up, and then I’ll let you be. I won’t even demand you post this month! Of course, you still have to post, but I’m not demanding it. Just do ...