Swords and Monsters, the Xbox Live Indie RPG released in late 2008 by Triple A Studios, has recently been updated to offer eight more alternate endings, in addition to the three the game had previously. This isn’t particularly funny news, but just look at this face. Look at this face!: 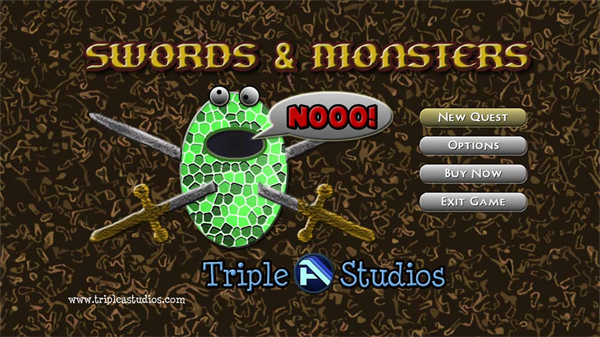 A-dorable. And, believe it or not, that picture isn’t even the game’s biggest selling point! Swords and Monsters is a minimalist RPG, which means that it tries to reduce the entire genre to the bare essentials of what makes an RPG an RPG. This isn’t exactly Final Fantasy—this is a game that you can easily beat dozens and dozens of time before the free trial runs out, and you have to pay the $1 that the game costs in order to continue. If you go into the game knowing that—rather than expecting it to be an actual game—you’ll totally enjoy the 45 or so seconds that you spend clicking through menus in order to save the princess in every way possible.

Of course, if you don’t go into the game with that sort of mindset—if you are a Serious Business gamer who’s just going to whine about how short the game is and how little gameplay it actually has—then you should probably just go back to shooting people in Modern Warfare 2.

It's been a while since I last made any New Year's Resolutions, with the last one being "To not eat so much paste in class", but the time seems right to press start and try again.