Square Enix’s press conferences are usually about how they won’t make a Chrono Trigger sequel because they don’t like making money. However, in their press conference today, they talked about their Final Fantasy remake policy. 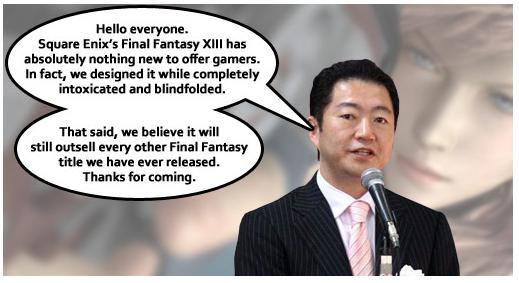 Our remake policy is basically a sham. We just change a couple of sprites here and there, re-record the music, and then slap a $50 price tag on the product.  In the past, we’ve been able to get away with this because GameStop doesn’t sell games that are over two months old. But in today’s world of Virtual Console and Xbox Live, people are able to download the original games at reasonable prices.  This has basically put a stop to the sales of our remakes.

During the question and answer portion of the press conference, I asked why Final Fantasy Tactics Advance 2 came out for the Nintendo DS, not the Game Boy Advance. I was then forcibly ejected from the building by an angry Cloud Strife, so I wasn’t able to get an answer, unfortunately.  I’m sure it was a good one, though.

So you just read my review of Zombies Ate My Neighbors and now you want to know if the direct sequel matches up. Or do you? Even if you clicked this page by mistake (ed.: I should've kept the typo "l