Welcome to “Inside the Guide,” the column on GameCola that gives you a behind-the-scenes look at the world of writing guides for videogames. Today, I’m going to discuss my guide for Phoenix Wright: Ace Attorney for the Wii-Ware. Well, OK, this is more about my adventures in downloading the game than actually writing a guide for it, but I’ve gotten away with stuff like that before in this column.

When I first heard Phoenix Wright was coming to Wii-Ware, I had two reactions.

Wii-Ware is apparently some sort of downloadable thingy that connects to your Wii Shop? I dunno. But I knew I had to find out in order to get a copy of the game, so thus began my quest to download my first downloaded game…EVER!!!

It didn’t take long for me to confirm that you download games for the Wii from the Wii Shop Channel, because the only other channels are the Mii Channel, the Pictures Channel, and The Channel That Displays News And Weather, also known as “The channel that never displays any information whatsoever because I didn’t connect my Wii to the Internet.” Phoenix Wright immediately popped up in the list of recommended games to download, and, after double-checking my room to make sure Nintendo wasn’t secretly spying on me, I immediately selected the game.

Then I got confused because there was no option to download the game. All I could do was look at a description of the game. Wha—what? But I wanted to buy the game, not just look at it! It took about ten minutes before I realized that you have to press the big “start shopping” button before you can purchase any games. Whoops.

Of course, you can’t buy games without money, but I had no reason to worry on that front. 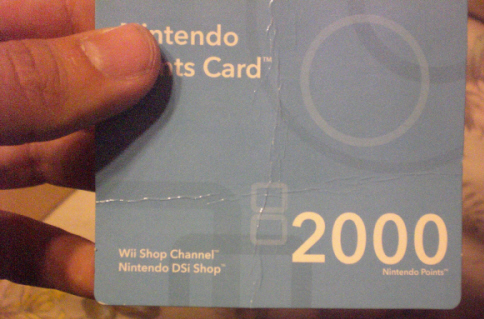 Mom got me a Nintendo Wii Points card for Christmas, which works on the Wii Shop Channel. As you can see in the above picture, Mom had to bend the card twice to get it to fit inside her purse. That’s no big deal, right? I can still use the card, right?

Well, guess what. Apparently, in order to “activate” your card, you need to scratch off a gray area on the back. And do you know what happens when you scratch along a gray area that’s been bent?

You end up tearing the gray area, that’s what happens! Moooo-oooom!

Fortunately, I had a back-up card and was able to get my Wii Points activated. Soon, Phoenix Wright was sitting on my Wii, waiting to be played. This brings me to the question of my guide for Phoenix Wright, which is the topic of this column, in case you don’t remember. Is the Wii-Ware version of the game similar enough to the DS version that I can get away with copy/pasting my DS guide while pretending that I’ve written something new?

Answer: Yes. The Wii-Ware Phoenix Wright is identical to the DS version, except for two new save slots and some optional motion sensor controls that allow you to do the “Objection!” point while presenting evidence. And, for some reason, instead of including Case #5 with the game, they turned it into a bonus download that will be released in May. But besides those things, the Wii-Ware version is basically an unchanged port of the original (Japan-only) GBA game.

So that means I have a guide that covers a brand new game, without me having to do any work whatsoever! That’s pretty good news to hear.

The best game on the Virtual Boy—if you can stand playing that thing.