I took four pages of notes while playing Tales of Monkey Island: Launch of the Screaming Narwhal with my sigfig, to help me when writing my eventual review of the game. This sentence appears no fewer than five times in my notes:

Guybrush Threepwood, mighty pirate, is the main character of this and all Monkey Island games. For this game, developer Telltale Games apparently decided that what Guybrush really needed was to become the most hideous man ever. They gave him a lined face, eyes that are sunken and vacant, a nose that stretches to half of his crescent moon-shaped head, and a want-some-candy-little-boy? goatee. I think they were trying to show that he’s aged in the nine years since the last MI game, but the primary result was that I spent a half-hour trying to find a paper bag to use on his head.

I bring this up because I had an awesome idea for this review’s introduction: I wanted to discuss Guybrush as a metaphor for Launch of the Screaming Narwhal as a whole; I wanted to talk about how, what Telltale did to Guybrush, they did to the entire game, making me want to put a bag over its head, too, and forget it ever happened. That would have been really very clever, and I want to make sure I get credit for thinking of it. I can’t actually use it, though, because, unforgivably, Launch of the Screaming Narwhal is a pretty fantastic game.

Launch of the Screaming Narwhal is the first part of a brand-new five-part episodic Monkey Island series. It’s a point-and-click adventure game, which means that you wander around the game’s world picking up random items, and then using those items to solve puzzles to progress the game’s plot. For example, you might find a mug of grog in one location, and have to take it to another to melt the lock on a thief’s jail cell to set him free so he’ll join your pirate crew. That’s basically what the entire game is like. 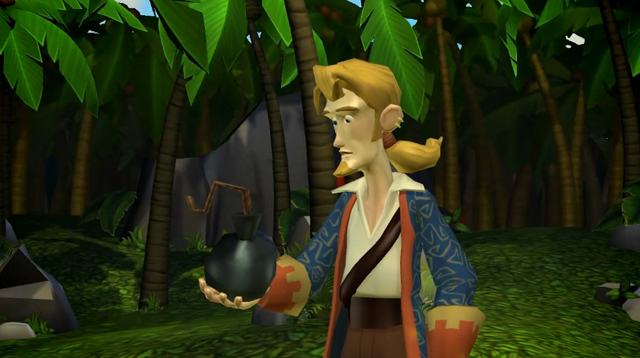 The developers really nailed things like the dialogue, and the jokes—even including jokes common to the series that I didn’t recognize as such until I saw how they made the game feel even more like MI. It also helps a great deal that the developers had Dominic Armato, the voice of Guybrush from Curse of Monkey Island as well as Escape, reprising his role, because he pretty much is Guybrush; his delivery and tone are perfect, perhaps owing somewhat to his (self-proclaimed) Monkey Island fanboyism. Moreover, there’s the atmospheric, very Curse soundtrack composed by the same guy who did the music for the other games, which broadens the scope of the game by changing with the tone of the story, even when the location stays the same.

So the game feels like Monkey Island, whatever that’s supposed to mean. But what about the story? Without spoilerizing it too much, Guybrush is about to finally destroy LeChuck, the evil pirate who’s been hounding him for the entire series; only, he doesn’t, and LeChuck ends up kidnapping Guybrush’s girlfriend Elaine, instead.

*yawn*. Yeah, I know. It gets better. There are unicorns. 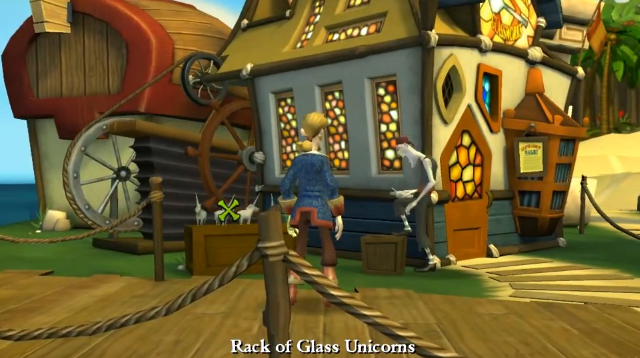 I also really enjoyed how the names of the items in this game reflect Guybrush’s perspective on them, and change as he learns something new about them, to comedic effect. The gizmo on the doctor’s roof is called a “Scientific Thingamabob,” because Guybrush has no idea what it is. The Voodoo Priestesses’ closet because “The Scariest Closet Ever” once you find out what she keeps in it. In addition, the dialogue you tell Guybrush to say rarely matches what he actually says. He’s usually much wittier than you tell him to be (which becomes funnier still because you weren’t expecting it), and sometimes he flat-out doesn’t say what you tell him to say, because he’s too scared of the consequences.

Those are just some of the good points. There are also some bad points, such as the aforementioned wonky controls. In regard to the controls, one could say that I, Paul, “have mambo in the head.” This is a Spanish phrase that means, literally, “I don’t understand why Telltale didn’t just use the superb point-and-click interface from their Sam & Max series.” Telltale developed a brand-new, and totally awkward, scheme for Launch of the Screaming Narwhal, in which you click and drag your cursor to move Guybrush around. With this system, you’re often getting stuck in corners, and often forgetting even how to move at all, since the controls are so unintuitive. With the old system, you just clicked where you wanted to go—so simple even a Madden fan could do it. This control scheme is not Grim Fandango awful, but it’s frustrating that Telltale used it instead of the solid one they already had. (Side note: You can also use the keyboard to control Guybrush, but using a keyboard to play an adventure game is like using a DDR mat to play a racing game.)

While I’m on the subject of head-scratchers, the visuals—including the hideously deformed main character, whose face, by the way, seems almost paralyzed, due to its very limited animations—warrant a mention. I mean, they’re not bad, per se, and they match up exactly with what Telltale’s been doing with its other series. For a company that’s trying so hard to capture the feel of the original MI titles, though, it’s mildly surprising that they didn’t look more to Curse of Monkey Island for inspiration; after all, that game pretty much has the perfect adventure game visuals. Tales tries to be a 3D version of Curse (and succeeds much better than LucasArts did with Escape’s soulless graphics), but why do that when you can emulate Curse’s style entirely, and make a better-looking game for it?

But really, those are negligible issues compared to the big picture, which is this: Launch of the Screaming Narwhal is a Very Fun Game. The kinda-boring graphics and the wonky controls have zero effect on the entertaining dialogue, the well-balanced puzzles, and the strong MI vibe. I mentioned before that I played through this game with my sigfig, and I totally recommend that you do the same: You should find a friend or snuggleumpkins to go through this game with, because this is one of the best co-op games on the market. Which is kind of funny, because this is a single-player game; but my point is that it’s a lot of fun to work together with someone to figure out these puzzles. It also helps to have two brains trying to work these puzzles out—it decreases the chances that you’ll get frustratingly stuck on one part for hours (ohhhh…you had to use the fake cigar on George Washington! Of course!), though Telltale’s signature in-game hint system should suffice for that as well.

With this title, and with the Sam & Max series, plus everything else Telltale has been working on, plus Dave Gilbert’s games, plus the remake of the first Monkey Island game, plus rumors of a remake of LeChuck’s Revenge, plus rumors of a new Day of the Tentacle game…it looks like my favorite videogame genre is back. Woohoo! To use a stupid cliché, this game left me wanting more; I can’t wait for the next episode.

Dead Space is too scary to go alone. Take this.