There was probably a reason this game was $2.99 at GameStop…but whatever it was, I’m the one who scored on it.

I should’ve gotten a PSP years ago. This machine really is a wonder—it’s a perfect PS1 emulator, it runs all kinds of other emulation, you can hack it easily, it displays wonderful graphics, and it’s a classic-style goldmine of platformers and—mostly importantly—JRPGs. I thought the DS would be the future of the handheld RPG world, and while it has a noteworthy set of items both well known and underappreciated (Black Sigil anyone? No one? Just me?), the PSP I definitely should’ve invested in some time ago.

The first physical game I actually bought for the system once I got it was this here Legend of Heroes. Remake-happy Falcom brought its less-known RPG series to the PSP in hopes of finally stealing Square Enix’s thunder. They hastily ramshackled a port together, chasing a dream of personally ushering in the new golden age of JRPGs, where large throngs of big-breasted women beat down the doors to lay their overweight programmers, birth the new generation of jdk Band in a few months, and line their pockets with so much money that the Japanese government issues them special diplomatic immunity license plates in hopes they’ll never leave the country and take the entire Japanese economy with them.

Having played the game, it…almost worked?

Truthfully, I’m not sure quite sure what I feel about this game. It’s so beautifully ordinary that it should get SOME kind of special recognition from some governmental power, like some sort of Kickstarter project trying to be a throwback to the old 16-bit template and succeeding at heart and spirit better than any crowdfunded game before until you realize it was a full commercial product from a known game company that charged FULL RETAIL PRICE. I still got a deal on this game, though. I’d say it’s worth, at best, $9.99. I paid a third of that. 😀

The story of The Legend of Heroes revolves around…you know. It’s your usual collection of clichés. Not at all detrimental to the experience and still pursued with some effort to make you care, but nothing you’ll remember much about at the end of the day. Hell, I’d often, often, OFTEN forget what I was supposed to be doing next while playing it. But those of you who tend to live for these clichés to feel more at home living in the past will…feel at home here. It’s at least earnest in trying to present a story you’ll care about, and the characters are quite likeable enough; you just won’t be having any wet dreams about them anytime soon (sorry to disappoint you, Christian Porter).

The Legend of Heroes: Tee of Vee itself feels like a cross between the first Lufia and Lunar in its general gameplay. It’s a very slick presentation of bobble-headed midgets moving from town to town, dungeon to dungeon, path to path, clashing with enemies on a turn-based battle plane. You upgrade weapons, armor, and your levels, and then gain new skills and spells from it. One thing I quite like is this game has a near-Final Fantasy IV propensity for changing up your party and having new people come in and out and old people returning, and it does spice things up in an otherwise “so consistent it’s borderline plodding and wheel-spinning” JRPG experience. You get a colorful selection; no two characters are easy to confuse, and they get a lot of spells and skills; and none feel particularly weak, either; so the character element is definitely satisfactory here. 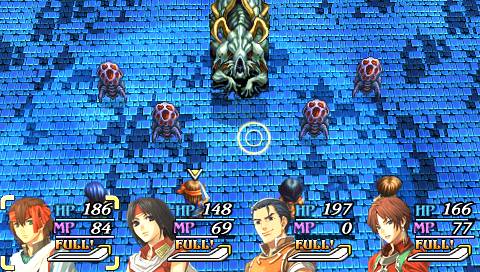 Battle is, again, something akin to Lunar or Black Sigil. You enter a separate plane with characters occasionally lined up in different places, and characters move around the field and close in on each other to attack. Range is important for getting attacks to succeed, and different characters and such have different ranges and targets required to get the most out of their power (tl:dr version: it’s basically Lunar). Interestingly, characters can use spells, skills, AND these limit-break moves that build up after getting hit. The spells can cost you after a while, but I’m still trying to figure out the balance of using skills. They don’t appear to cost anything and add more power to characters that don’t run into a lot of major competition throughout the journey.

The difficulty in this game is relatively low, or at least unbalanced, and for some reason you run into very few boss characters. I did die a couple times while playing, but it doesn’t have the right challenge factor to keep you going. There aren’t any sidequests or real exploration, either; this game is quite linear and goes to some trouble to make it stay that way (which is both kinda infuriating and helpful, seeing as how often I’d forget what I was supposed to be doing next). Closest it gets to offering a gimmick is a pet bunny you feed to change his mood so that he offers a different benefit at the start of some battles.

So, for some reason, I kinda wonder why I was continuing on here. There is no real ambition here, no gimmicks, little in the way of razzle-dazzle—this game is purely for the increasingly niche JRPG fandom that DOESN’T want something so ambitious, that wants something like what they’ve played 100 times already but is still new. 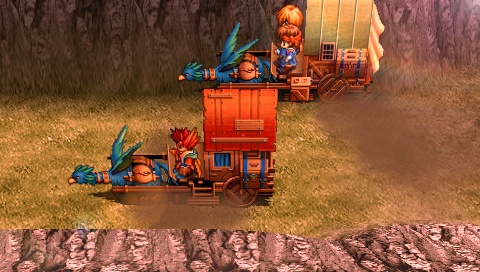 I’m one of those, so quite frankly, I’ve enjoyed pretty much every minute of playing The Legend of Heroes. I’ve been looking for this kind of game for years for no other reason than that’s what I like playing, and I got it. This is Meteo’s Dichotomy: I don’t have a lot of great things to say about it, but I still find myself glad to have it. It’s the kind of RPG you just chill out to instead of getting hyped up for it. I can’t hype you up for it; I can just tell you the facts and say I still found it worth playing.

To me, this game is quite literally just an old-school RPG with some glittery paint on it, and that’s fine. Nothing wrong with that as long as you’re expecting that. This game should’ve probably never been released retail; it should’ve been a PSN indie, but oh well, $2.99 is an awesome price for a game like this, and I don’t regret buying it.

Diana tells the tale of her adventures in San Diego...with videogames!