Face it, people. Chrono Trigger is never coming back. Make your peace with Chrono Cross and all its canonically questionable content and be done with it. The only other consolation gifts you’ll ever really get is whatever fan-hacks you can download before Square-Penis puts the kibosh on them, and this game, which is so dutifully trying to be Chrono Trigger it’s both admirable and depressing at the same time.

I feel like I could do this review rather quickly or in quite an elongated fashion; the question is whether the game deserves either. There is quite a bit to cover, but it’s in such a dynamic that there isn’t much of a middle ground. Black Sigil: Blade of the Exiled presents much to those who remember with much mind candy how awesome it was on certain Saturdays to be able to play Chrono Trigger for eight straight hours and still want more, but it handles those dreams with such fumbleputted hands that you’ll either walk away furious and disgusted, or willing to forgive its flaws for “the real deal,” a game that really could have been confused for a port of an unreleased SNES game.

This would be where I talk a little bit about the plot of the game, but I won’t. 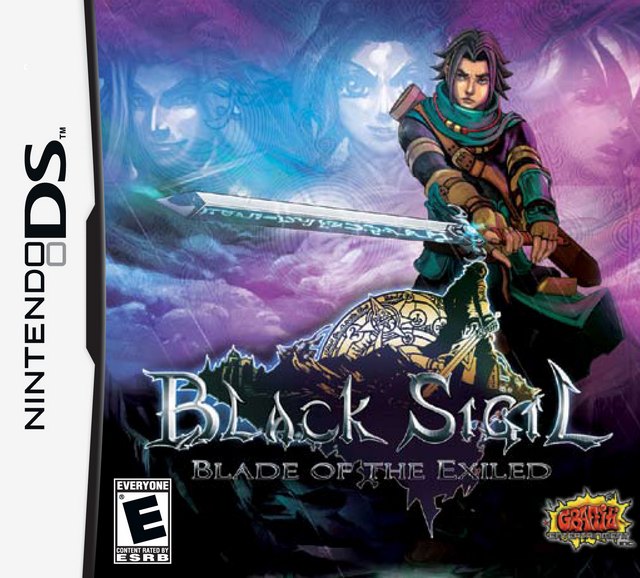 Really, you would almost expect this to be Kairu delivering a flaming chop to a bipedal walrus in his frosty hometown.

Like Oniken, it’s quite fucking obvious all the effort went toward RECREATION—not carving its own identity, not hitting the mark where it needs to hit, but showing off the technical prowess to do something intended to confuse others for authenticity. The studio behind this is not Japanese and damn sure not Squaresoft; it’s Studio Archcraft from French Canada, the same region that brought us such landmark titles as… … … …, and with that pedigree in mind, it’s still rather pleasing that they could pull off a game that, at the very least, looks like old-school Enix trying to do a Malt-O-Meal version of Trigger back when they used to have the other corner of ’90s JRPG-industry covered with titles that focused on innovation and gameplay, as opposed to Squaresoft, which focused on, well, everything.

First thing I have to say is that the graphics are the real darling in this title. Fuckin’ A, I am impressed. They did completely nail that look and detail without compromising anything. Particularly the towns (which, in many cases, looks like the complicated in-works of Trigger’s Zeal) and some of the more interesting dungeons, as well as the character sprites, and even the font all ring true. I am impressed.

Second thing to say is everything else comes off either trying too hard, not trying hard enough, or REALLY testing the boundaries of international copyright law because, honest to God, some things are quite simply LIFTED from Square’s landmark titles. The character sprites are quite nice, but any other character artwork for them just doesn’t really seem to work. They look like they were drawn up by random pictures from DeviantArt. The soundtrack merely “does its job” by recreating the general sounds from that bygone era, but rarely, if ever, goes above that. The world map system, for some reason, is pretty much directly lifted from Final Fantasy VI! It doesn’t work quite as well here, and speaking of plagiarism, there are some battle sprites and spell effects which, I swear, came straight from the source code of Trigger. Maybe a shout-out? Hard to tell. 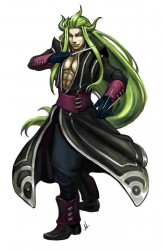 They even steal Final Fantasy VI characters, although they at least had the good sense to make Setzer badass and Gau a reasonably important summoner.

The story of the game is almost instantly forgettable; it’s pretty much what you’d expect, although I did like the way they changed some of the dynamics. Usually in these games, by 1/2 to 2/3 through the game, you effectively own the world with your collected ensemble, and you’re just chasing the bad guy around—not really the case here, which I found refreshing.

The battles, on the other hand, represent the real problem of the game. Ad nauseum, the battles make the RPG, and Black Sigil again tries its hand at Chrono Trigger territory, but to not as great effect. The first problem is RANDOM ENCOUNTERS. CHRONO TRIGGER DID NOT HAVE THAT! Actually, it’s less that they exist, and more to what RIDICULOUS degree you fight them. Any room of a dungeon may guarantee between three to six fights, and when you get into a fight, you’re taken to one of several possible fighting “rooms,” with physical obstacles and certain enemy placement to provide the means to organize attacks (which, guess what, means zone-focused spells and specials and dual attacks). Again, that’s not bad by itself, but the collision detection is so high on each of your characters that you may only get LUCKY to have Kairu at the end of the line squeeze through enough to run a swipe at some dick flower. This presents a major frustration point for the game (especially when there are special attacks that allow you to bypass this obstacle—why is Rogurd able to dash his axe against someone across the field when he couldn’t do that normally? Bullshit!) and fake difficulty at its worst.

In fact, the whole game COULD have been awesome if it weren’t for easily fixable problems like this. This game is also notoriously buggy, from certain money exploits due to bad math in the programming, to instant-freeze and other problems that kill your game. It would be worth it for someone to take the ROM of this game and hack it into better playability. A quick look at Wikipedia shows that this game was actually once designed for the GBA back in 2005/2006, but someone decided near the end of the production to transfer it to the DS instead. The feeling of being rushed is pretty noticeable here and definitely by the end, which I’m sorry to say does not make the experience fully worth it. Both the ending AND the final boss are likely crippled in their execution from what must be a time and money crunch.

Oh yeah, and fix that fucking world map so I know where the hell I’m going. **sus. 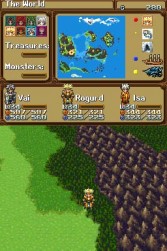 Yeah, this. That is literally all the map you get. Good luck finding your way around once you get the airship.

All that being said, there is still quite a bit to admire about this game. The writing is actually not too bad in quite a few places, and it makes even conversing with random town turnips interesting. You have a LOT of towns and dungeons to go through, and there is easily a 50-hour quest here, not padded up to 50-80 hours like FFVI and Trigger were, but 50 real hours from beginning to end. The dungeons are pretty painful, but they are rather fascinating, some of them, with real puzzles and branching to allow better use of ALL your team members.

Actually, yeah, one of my favorite things about this game is that there are NO weak characters. Every person you fight with pulls their weight in battle and fulfills two or three usual JRPG tropes at the same time. This is also a VERY refreshing thing to behold in this kind of game.

But the best part is, thankfully, not just saved for last, but could be found throughout the game. There are more side-quests and hidden stuff littered throughout the game than FFIV, VI and Chrono Trigger combined and many are worth the effort (hell, you even get two secret characters!). By the third “half” of the game, I really felt I was hitting my stride for this game, and these side-quests helped to bring the experience up from “blah” to “blah and a half.”

So, what to think about this game? Disappointing, yes, but I still had fun and see myself playing it again. I’d rather give money to a Kickstarter to develop a fixed version, but it’s far from the worst RPG I’ve ever played.

There aren’t many good reviews for this game, so I’ll be generous and give it a 7, which is pretty fair, truth be told.

Go ahead and give it a shot—just don’t get your hopes up.

In a future where memory is malleable, will you remember this nod to classic cyberpunk?