I was really excited to score this review code. I’m not necessarily an NES enthusiast the way so many neo-retro games these days are built to cater to, but I always love the idea of playing a brand-new platformer that plays like they used to when I was a young’un.

Oniken fulfills that too well.

Pretty much a legitimate love letter to the Famicom way of doing things, I could easily see JoyMasher porting this ROM to plastic NES cartridges and marketing it to fans at videogame conventions and such. $19.99 would be a good price point for it. I could see some real press coverage on this too, maybe not from an EGM or Game Informer or whatever’s out these days (I don’t collect game magazines anymore), but I could see some print publications covering this. All appearances indicate this is some sort of genuine lost article from 1992 and it lives up to that indication.

But appearances are all this game really has. 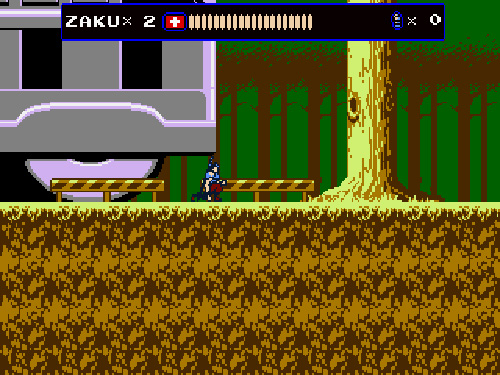 Make no mistake, I genuinely think this is the best homebrew sprite design I’ve ever seen. It is AWESOME. The cutscenes, the characters, the enemies, the sword swings, backgrounds—if this game were released on the NES, it would still be appearing in top-ten lists for Best NES Graphics. It becomes obvious that the AUTHENTICITY was the top priority as this game was programmed, and for that, JoyMasher succeeded in spades. Many superties and subtleties in this game all ring true, and the YouTube video for it got me really excited to request this game to review.

It wasn’t long after that, however, that disappointment set in. To really get this authenticity going, something had to suffer for it. What did we learn in the 1998-2004 era of gaming when graphics and production values took center stage over gameplay? You guessed it. First of all, I had some issues trying to get this game to work well on my computer, which is more than adequate to play the game. I could not get Direct9X to work and at first I had to set my controls to my keyboard. I could not skip the extended intro (well designed though it is) and it really slowed down my interest to keep playing after I turned it on.

And playing this game on a keyboard SUCKS. I could barely get by the second stage of the first mission, and you can’t customize the controls; it just gives you a selection of choices. Eventually I was able to get my controller to work with it, but that only bought me a few more stages. This game is difficult, which is awesome for die-hards of the Nintendo school of knocks, but we improved on that example for a reason. So many of my deaths in this game were cheap. Enemies knock you back a fair bit any time you get hit, which is disorienting enough, and you get knocked down to flames and instant-death gaps. 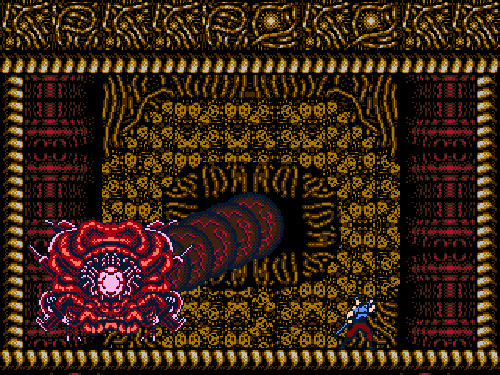 By the way, how many games do you see that offer multi-story sized levels, where you can fall down to new depths of exploration at certain parts of the stage, only to die and start way back to the last checkpoint at other parts of the same stage? Punishment for exploration blows.

A game this simple should not be this hard. It’s a pretty straightforward platformer—you play as a guy with a sword who cuts through all manners of enemies in a cross between Mega Man Zero and Journey to Silius. You hit item boxes containing health-ups, sword upgrades, grenades, etc., and occasionally you find hidden extra lives in broken walls in the second stage of a mission. To its credit, it has many opportunities where it changes up the gameplay with the standard-scrolling levels, jet skis, elevator brawls, etc. and some really cool boss fights. But losing constantly to get there does not make it fun. Health upgrades are not generous in this game. Sword upgrades are constant, but they don’t do more than add a little extra reach. You can use a BERSERK mode of some kind, but it’s really quick and I didn’t find it useful. Grenades aren’t too bad, but aren’t always useful when I actually need a GUN to fairly return fire. 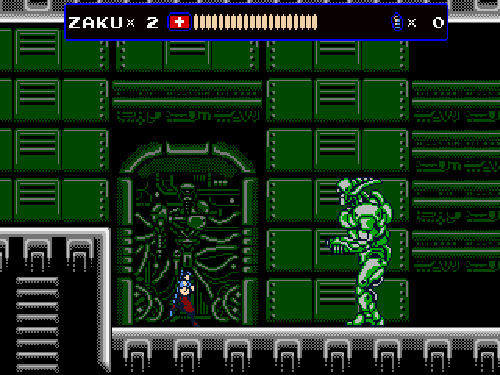 And the worst part? I couldn’t even finish the game. I got to the fourth mission before I called it a night to return later—and when I returned later I found I could not find any controls that worked. I was supposed to be able to use my controller, but all I could do was use the arrow keys on my keyboard. I don’t know if this was a glitch or an error of mine or what, but the fact remains I could only play this once, and that doesn’t usually happen to me.

After that, I just said “fuck this” and started this review. My resulting score is rather generous considering the mood I was in when I began.

So, ultimately, I feel this COULD’VE been a really kickass game, but in the focus to make it authentic and believable, it was made cheap and difficult in places it doesn’t need to be. I don’t know how other Nintendo players do it, but to me, losing dozens of lives to get to the next stage is not always my idea of fun. The gameplay needs to be addicting enough to make me want to KEEP going—I need some reward for my effort. My reward is the same as the game itself, and if I can’t even use my controller for it anymore, so what’s the point?

Awesome sprite and cinematics, JoyMasher, and I fuckin’ mean that, but let’s work on that gameplay, hmm?

Instead of developing a whole new game, why not just make puzzles out of game-related art?