OK, so here’s the thing. Everything I said about the last game goes. Everything. If you liked the last game, get The Siege of Spinner Cay, too; if you haven’t played the last game, read my review of the last game and decide if you want to. (Spoiler alert!: You do.) The graphics are the same, the controls are the same, and the freaking awesome hilarity and (generally) well-balanced puzzles are the same. (Not literally. There are different jokes and puzzles, but they’re of the same high quality.) This game is a Total Winner, uppercase, just like the one that came before it, and just like the ones that come after it. (Well, with one exception, but we’ll get to that in a later review.)

Now that I have the above paragraph as a solid intro and summary, I guess I need to come up with some body paragraphs. 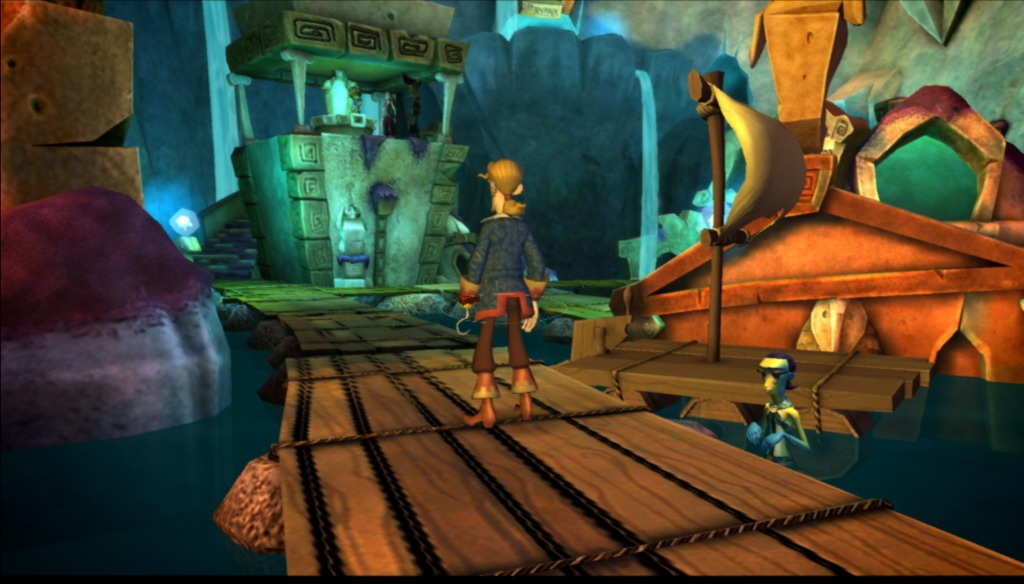 Well, OK. A brief recap for those rule-breakers who’ve decided to just keep reading this review, even though they didn’t play the last game or read my last review. Tales of Monkey Island is a series of episodic—episodic meaning “really short”—point-and-click adventure games, and The Siege of Spinner Cay is the second game in that series. They star Guybrush Threepwood, mighty pirate, in his quest to squelch a plague that he embarrassingly let loose on the world. To do this, he needs to obtain a mystical sponge, and you need to help him do that.

Gameplay involves picking up random things and using them with other random things to solve puzzles. For example, you might attach a plastic pirate hook to a cannon’s ramrod in order to pluck a sword out of the ocean in order to break yourself out of captivity. You basically keep doing things like that until you win the game, and it’s totally awesome. You also can’t ever die, or even really lose the game; the game encourages you to explore your whims without fear of having to restart because you accidentally walked on a bridge too many times, and oh darn, now it’s collapsed. (Yeah, that’s right—I am calling you out, Kings Quest II.) That, too, is totally awesome.

There are a few new and exciting things to talk about in this game, in comparison with the last one. In this game, both LeChuck (arch-nemesis to Guybrush) and Elaine (lovey-dovey to Guybrush) get way more screentime—moreso, even, it seems, than in any of LucasArts’s actual full-length MI releases. It’s neat to spend time with these characters, who are arguably more important to Guybrush than anyone else in the world,  and work with them to solve puzzles, instead of interacting with them almost exclusively via cutscene, like in previous games. There’s also a new character, referenced but not introduced in the previous game, who’s the most fun MI character since Murray, the demonic talking skull. She won GameCola’s award for “Best New Character” in our recent year-end awards, so you know she must be great. (Of course, we also gave our award for “Best New Peripheral/Accessory” to—I’m not making this up—”a cardboard box,” so maybe we’re unreliable.)

The game also has one of the most awesomely clever and meta puzzles I’ve ever seen, comparable to the Mad Libs puzzle in Telltale’s first Wallace & Gromit adventure game. Unfortunately, this puzzle also leads directly into the most unintuitive and horrible puzzle I’ve ever seen. It’s difficult to describe this without spoiling the game at all; if you don’t mind minor spoilers, highlight the following text to read about this puzzle: [There’s a part of the game where, to progress, you need to ask for a certain character’s help. If you tell Guybrush to ask this person for help, Guybrush says, basically, “there is absolutely no way I am going to ask that person for help. Ever. It will never, ever, ever happen.” However. If you try to give this character the specific item that you need help with, Guybrush will qualmlessly do so, and then qualmlessly ask for this character’s help. This, obviously, makes no sense, and makes the puzzle obnoxious to solve, rather than enjoyably challenging.]

If you were a weenie and didn’t highlight the text, let’s just leave it at this: this puzzle makes the goddamn monkey wrench puzzle from Monkey Island II seem totally logical. 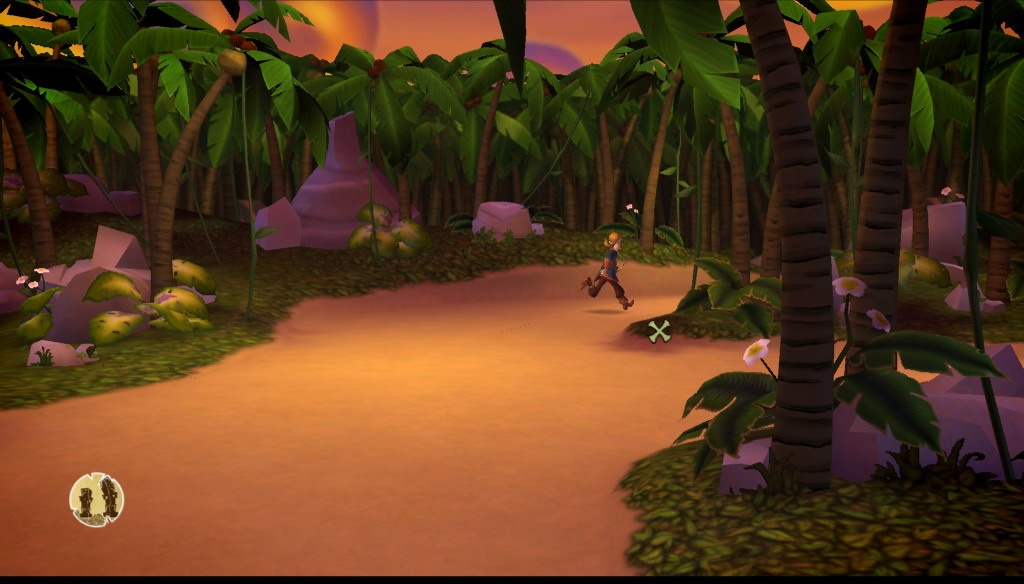 We (“we” being myself and my snuggle-umpkins, with whom I was playing through this game) had one more problem related to this particular puzzle. After a long while of not knowing what to do, we decided to be weenies ourselves and turn on the game’s built-in hint system, to help us figure out what the frak we were supposed to do next. Now, this may have been a glitch exclusive to the review copy we were playing, but the only hint we ever received was that there was some item, somewhere, that we needed to pick up, and do something with. No matter where we went or what we did, this was all the game would tell us. It refused to give us any more details, like, for example, where this item could be found, or what it even was.

The best part, though? Not only was the game being annoyingly vague, but it was also lying to us. There WAS no item we had to pick up; in fact, there was no item we COULD pick up. There was something else entirely that we had to do, as described in the super-secret white-colored text above. So that was a little weird.

Also: Unfortunately, but totally expected, The Siege of Spinner Cay continues with the awkward click-and-drag walking controls of the first TMI game, instead of just allowing you to click where you want to go, like the classic LucasArts adventure games, and like Telltale’s own Sam & Max series.

I talk about this kind of thing all the time, but I still think it’s important for any developers reading this to know: You don’t have to ditch the point-and-click interface. You really, really don’t. Everyone loves it, and it works great. You don’t have to try to create something more “modern,” because the more “modern” control schemes just don’t work for this genre. They didn’t work in Grim Fandango (at all), they didn’t work in Escape from Monkey Island, and they don’t really work here, either. Just stick with the pointing and the clicking; it’s intuitive, it’s easy, it’s understandable, and everyone likes it and is comfortable with it.

IT’S OK; THE OLD-FOGEY RANT IS NOW OVER

In terms of replay value, the game is short, and it’s very fun, but those are basically the only reasons you’d be playing it again. There are no different difficulty modes (as in Curse of Monkey Island), and no Achievements or anything else for you to go back and collect. It’s the sort of game you’ll want to come back to years later when you’ve forgotten all the answers to all the puzzles and want to have another good time; it’s not, however, the sort of game you’ll be playing for weeks upon weeks after you buy it. (In fact, you’ll probably only be playing it for a weekend, or maybe even just a day, since it clocks in at about 5-6 hours, dependent upon how long it takes you to figure out the Worst Puzzle Ever.) 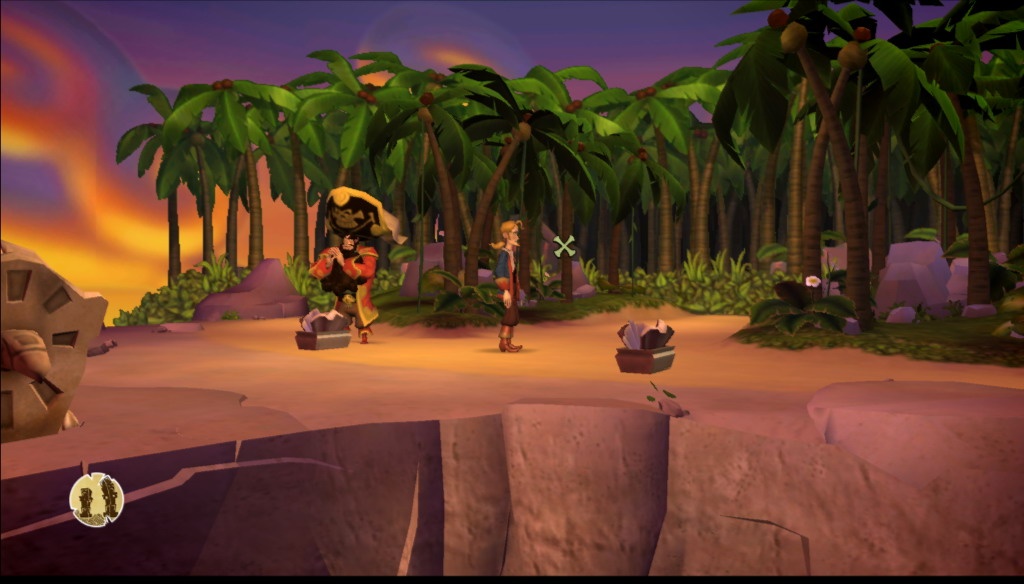 I know I’ve been more critical than positive in this review, so let’s try to make up for that now with some obnoxiously large font:

THIS GAME IS REALLY REALLY FUNNY.

As in, laugh-out-loud funny. And I’m not just talking about typing “LOL” into an AIM chat window, because you’re not fooling anyone, and we all know you’re not really laughing out loud; I’m talking about legitimately laughing out loud. Both of us. Me and my snugle-umpkins. It’s like the developers were actively trying to disprove the Mid-Boss. Moreover, the puzzles in this game are more clever than those in other recent adventure games, and they have more character to them. Tailor-made! That’s the phrase I’m looking for. Unlike in other recent adventure games, the puzzles don’t feel like they came from the Vault of Unused Puzzle Ideas; they feel like they belong to this adventure game in particular.

The controls are bad, and there’s that one awful puzzle, but you might not even notice, because of all the fun you’ll be having, especially if you play through the game with a friend, or with your own snuggle-umpkins. The “so basically” of Tales of Monkey Island, so far, is this: You aren’t going to find a more entertaining modern-day adventure game.

Square Enix's press conferences are usually about how they won't make a Chrono Trigger sequel because they don't like making money. However, in their press conference today, they talked about their