What? Oh. Sorry about that! I just got completely distracted by GameCola’s awesome new prettiness….

Am I supposed to be writing about something?

Hello everyone, and welcome back to a brand new edition of “testgame.exe: Making the Adventure!” It’s been a while, I know, but everyone’s favorite amateur-point-and-click-adventure-game-in-development (that’s testgame) has been far from idle during GameCola’s hibernation! Well, it has been a little idle. OK, a lot idle. But it’s not my fault. (I mean, yes, of course it’s my fault, but I choose not to blame me. I am blameless!)

Anyway! At some level of activity between completely idle and extremely productive, the result is that we now have a pretty darn sizeable update for testgame. At least, it’s way bigger than a normal monthly update, if not quite as big as one might expect for six months of downtime…. Nobody’s perfect!

“OK, enough with the defensive attitude,” I hear you say, “Where’s my testgame?”

Well, here it is! I now offer to you fully one half of what will someday be a completed testgame.

…You don’t believe me?

This is not a joke. Minus some (i.e., mucho) graphics and animation, we are now officially halfway through testgame! (So that’s, what, five years down, five more to go? Something like that.)

In addition to new plot and puzzles to get us to the second half of the game, this update includes some more animation and background work, and fixes for a bunch of random glitches. Check out the super long bulleted list at the end of the article!

We’ve also got some behind-the-scenes changes taking place currently that I should probably talk about, because they are important. Starting with this month’s update, I’ve been getting a lot of help from real-life Paul, and he’s going to be helping me a lot more in the months to come, as well. He’s been editing all of the dialogue in the game, fixing grammar, writing new lines, and generally making everything better. He’s also starting to do some more planning for the next section of the game, writing dialogue and figuring out puzzles, etc., and filling in the general outline of events that I already have, all subject to my approval.

Paul’s been an asset to testgame from the beginning (has anyone ever wondered why the main character in the game is named Paul?), and since he’s interested in getting some game design practice, and I currently have waaay less time than I would like to work on the game, this turns out to be a pretty good plan. So don’t worry, I’m still here and in charge, but now Paul gets major credit. I guess this means I need to start remembering to say “we” more often. Also, now that Paul’s working on dialogue-related stuff, I think for this next month I’m going to be focusing on filling in some missing animation….

Oh yeah, I’m going to be shooting for monthly updates, just like I used to do with the old GameCola, or at least that’s the plan. So keep an eye out in a month or so for the next update. 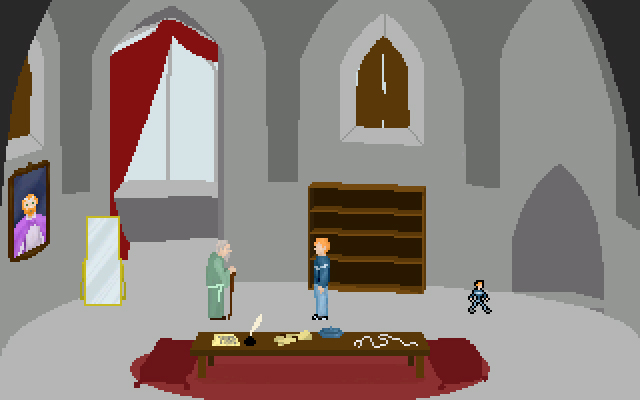 [Important note: Once again, I’ve included a couple of save files from various parts of the game to save some time for those of you who have already played testgame a million times (there’s a “Part 2” save file that starts outside the castle, and a “Before Herkimer” save file that starts… before Herkimer). If you’re using Windows Vista and you want to load the game from one of these save files, you’ll have to move the agssave.001 and agssave.002 files that I’ve given you into a folder called “New game” under the “Saved Games” folder in your Windows user name folder. If you’re using Windows XP, you should just be able to leave these files in the same folder as the testgame.exe file and load them from inside the game.]

Now with links to the pages people searched for!