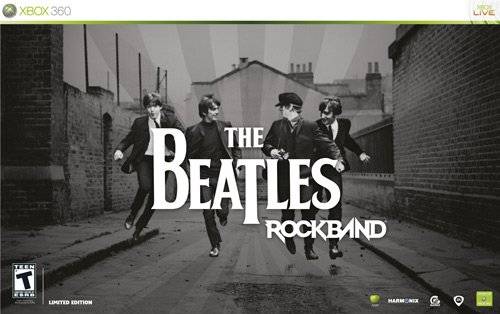 The Beatles were revolutionary! A massive inspiration to everyone who ever lived. They were a massive influence of mine, although I didn’t realise this until a few weeks before the release of The Beatles: Rock Band. The instrumentation, format of their music and the lyrics has been so important throughout my childhood and the years stemming up to my adolescence and beyond, and I didn’t even notice.

The music of The Beatles knows no boundaries. I feel bad for not appreciating the expertise of their music for so long.  Out of apology, and out of love… I don’t have to explain why the audio in this game deserves a 10.

The Beatles: Rock Band tells the story of The Beatles (not The Monkees, as some had speculated) from the beginning of their careers up to the end when the band split. This means that the songs are in the order they were released or written, which is where the only true problem with this title arises.

The songs that are particularly the hardest to play are actually present from the beginning of the game, and by the time you’ve warmed up by playing these hard songs, there is suddenly a complete lack of them. Simlar to Insane difficulty  on Gears of War 2—a massive gunfight then rooms and rooms of scenery and no enemies.

This is because The Beatles refined their methods of playing and instrumentation by the time they started working on Sgt. Pepper’s Lonely Hearts Club Band. The songs got better, yet the instrumentation become much simpler—meaning that despite a few tricky drum patterns, you go from harder songs to easier songs. 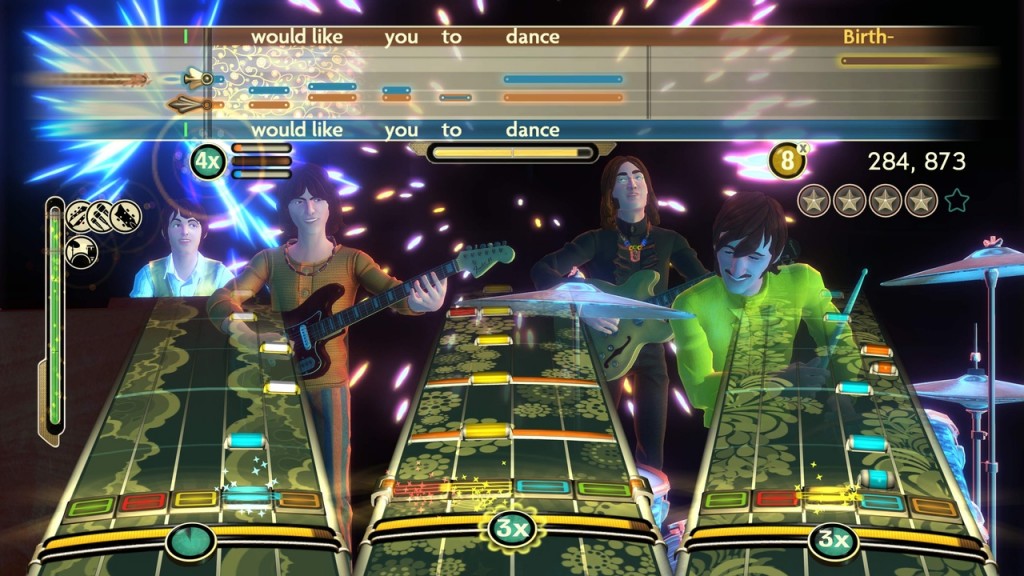 The setlist goes from Hard songs to Easy songs, which is the opposite of how the original Rock Band or Guitar Hero titles work.

Seeing as the game is really geared toward casual gamers as well as fans of The Beatles (who are mostly 45-50 years old or so), I expect having the hardest songs first was perhaps an oversight—but at least people can play on Easy and technically not fail them.

And, just like its predecessors, The Beatles: Rock Band has more than just guitar, allowing the player to play the bass, the drums or sing the vocals to a song. The vocals have been tweaked, though, now allowing you to have up to three microphones.

One of the reasons I have failed to use this feature is that USB microphones supported by the Rock Band games cost money, and with a USB microphone for all three vocal parts, the total number of required USB devices for a full band is six devices.

The Xbox 360 has three USB ports, so how Rock Band tackled the four USB instruments was to supply a faulty USB hub that required a separate AC adapter to work.

Seeing as a USB hub only has four slots, you’d require two in order to play the game with all three instruments and all three microphones active at once. You’d need the four sockets free for the four AC adapters required – your TV, your 360, and the two hubs. If you’re one of the casual gamers that Harmonix geared The Beatles: Rock Band toward, then chances are you’re too dull to understand how to set all this up.

That could well be another oversight.

But…! If you purchased Lips, you’ll find the wireless microphones are completely supported by The Beatles: Rock Band, negating the requirement for a second USB HUB. Score. 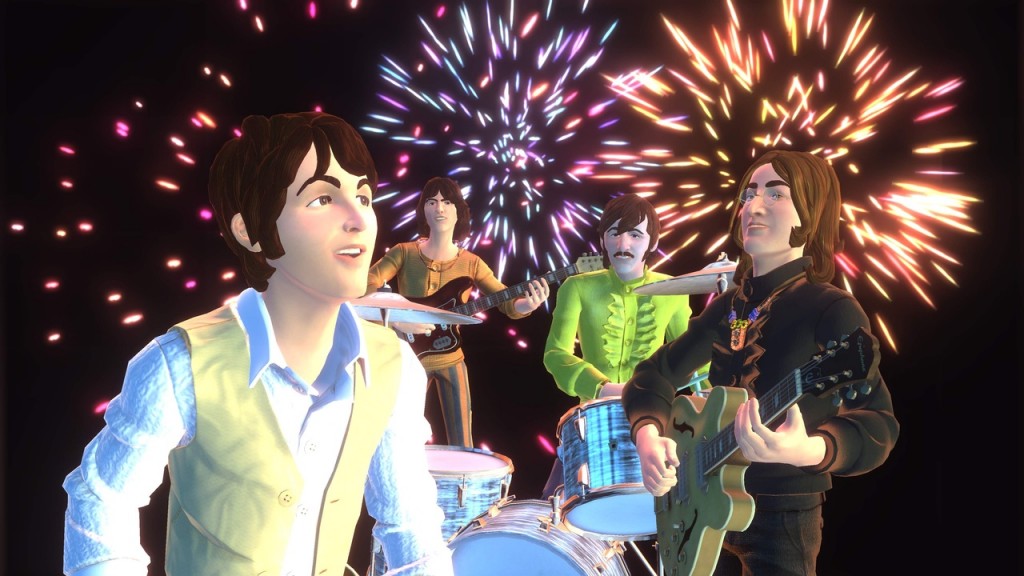 The Beatles: Rock Band is much more than a generic Rock Band title—it’s designed to be an experience. Among unlockables are photos that had never been released before, lost footage of The Beatles and challenges that consist of the same songs you’ve played, but now in a marathon (more tests of endurance than tests of skill).

There are a few ‘cheivos directed toward harder songs, but most of them are the kind of Achievements that would ease casual gamers into harder prospects. While it sounds challenging, most of the Achievements that require note streaks or high percentages are all on songs that you wouldn’t consider too difficult—it’s not designed to be too challenging, which makes it welcome among my list of Xbox 360 titles.

And, like all of the games I praise for their Achievements, there is an easy-to-use Achievement guide within the game to show you your progress toward earning them and the criteria for earning them. It means that the Achievements feel more weaved into the whole experience, instead of coming across as just a few points for beating something straightforward or obvious.

Because of this, I can safely say that The Beatles: Rock Band successfully makes itself wide-open to both casual and serious gamers, as well as those who wouldn’t class themselves as one or the other.

The only thing left to mention is the absolutely stunning visual style. I’m sure that if you’ve been following the interviews that have been done over the six months before release, you’re aware that the design team had to reinvent the style of The Beatles. This was because Apple Corp specifically requested that Harmonix did not just copy Yellow Submarine.

Instead of being a mish-mash of what you’d expect, Harmonix really took the staple elements of The Beatles designs and vastly reworked them, so what you’re getting is a brand new experience (animated fluidly and awfully stunning to look at).

Yes, The Beatles: Rock Band is absolutely beautiful. When you’re playing a song that The Beatles didn’t perform at a live show (i.e. anything from the Abbey Road sessions), you are treated to a visually intensive dream scene packed full of special effects, bright colours and stunning artwork.

However, during “Here Comes The Sun” or any other song that has a profusion of bright light, the highway which the notes travel on can become bathed in sunlight, and the notes become very difficult to see.

Other problems are due to the dream-scenes being so amazing you end up losing notes because you’ve just been admiring the beauty of whole thing. If there is one thing The Beatles: Rock Band is, then it is beautiful. Attention to detail really has been paid, unlike Guitar Hero, which continues to spin out games with characters that have leprosy.

If you are a gamer, and you like The Beatles, then this game is a no-brainer, I assure you. It contains 45 of the best songs from The Beatles’ career, covering everything from their boy-band years all the way up to singing on a rooftop as some kind of publicity stunt. 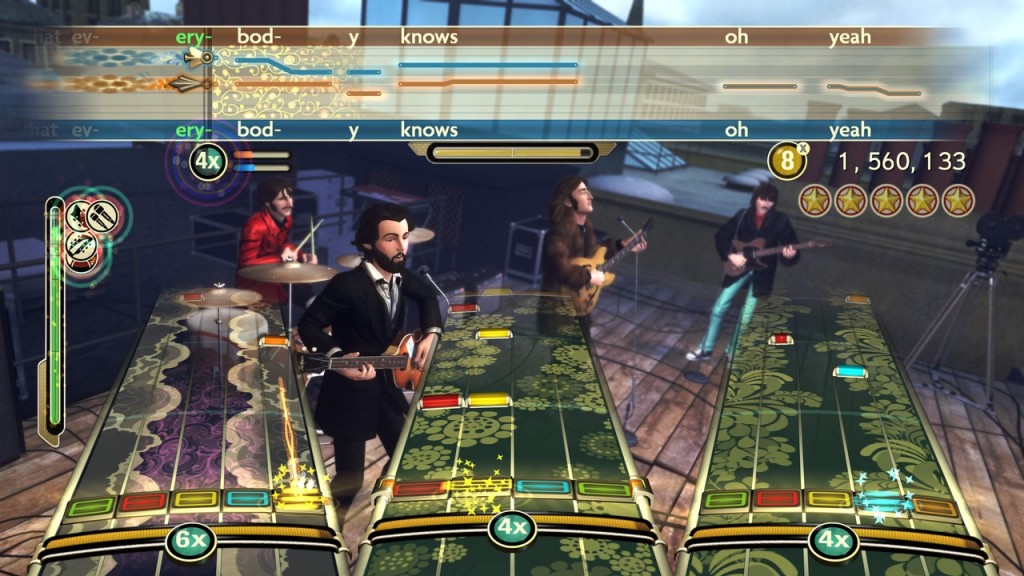 It’s just sad that they managed to avoid “Hey Jude,” “Lady Madonna,” “The Long and Winding Road,” “Eleanor Rigby” and “I’ve Seen a Face,” which I hope turn up as downloadable content with or without content from their respected albums at a later date.

Besides these, they really hit the nail on the head: “Get Back,” “Taxman,” “I Am The Walrus,” “While My Guitar Gently Weeps,” “In An Octopus’ Garden,” “Hey Bulldog,” “Dear Prudence,” “Lucy in the Sky with Diamonds,” “With A Little Help From My Friends”—they’re all masterpieces, which can be said about the entire setlist, which still managed to pull songs I didn’t know out of the bag (all of which are amazing!).

Like I said earlier, a 10 for audio really was justified, as is purchasing this game NOW. Do yourself a favour, and if you haven’t experienced the music of The Beatles, feel free to acquaint yourself with another one of the greatest musical sensations to come from my country.

Hail Britannia. Hail The Beatles. What More Can I Say?

Barin: The port of Samghon on the western shores of the Red Isle will shelter us.