Hey, paisanos, it’s the Super Mario Bros. Super Show! edition of “What the Crap?”. Chances are if you were alive in ’89, you were watching this show. Super Mario Bros. 1 and 2 (aka Super Mario USA) had been out for a while, and everyone was on them like white spots on a mushroom. It was a great chance for Captain Lou Albano to get in the spotlight again, and a TV broadcasting company could make some sweet Dominos Pizza advertising money and get all the little Mario Mania kids.

I remember rushing home from first grade to see the start of the show. It was tough because I was afraid to use the school bathrooms back then, so I’d been holding it in for the past couple of hours. But now that I’m a little older, and a bit more conscious of my bladder, I decided I’d watch some episodes on Netflix Instant Watch on my PS3. Probably the easiest way to get Mario on the PS3.

First, let’s give a listen to the intro. This was probably my first introduction to rap music. But seriously…what the crap? The rap starts off with Mario and Luigi (one voice?) explaining how plumbing is their game and they’re “not like the others who get all the fame.” Who the crap are they talking about? I’m not aware of any famous plumbers out there. Are they referring to Roto-Rooter or Liquid Plumber, perhaps? Mario is probably the most famous character in the world, even more famous than Mickey Mouse. 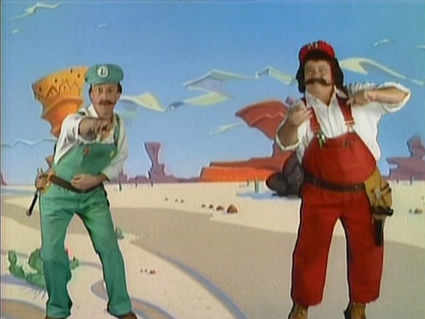 Get ready for adventure and remarkable feats! For some reason, Captain Lou and whoever the crap played Luigi were always dressed in Fire Flower power.

Then they start rapping about the Mario that you know, the guy who helps the Princess and fights Bowser. Why do we see the Mario Bros. going down that flag pole, and then Bowser, sitting at the bottom of that flag pole, with a brick ceiling overhead? What was he doing there? To the brink! Now let’s talk about the actual show. Before we get to the cartoon part, which was only about ten minutes of the show, we get to watch a live-action segment with Captain Lou Albano, famous WWF manager, may he rest in peace. They managed to get a lot of guest stars like Magic Johnson and Ernie Hudson (a.k.a. Winston Zeddemore from Ghostbusters), but sometimes they’re just incredibly stupid. In one, the Marios have a bat in their apartment, and they call an exterminator who is a vampire, who turns out to be the bat in question. In another, Mario is trying out for the Brooklyn Dodgers and practices his pitching with Mama Mario’s famous meatball recipe. But they’re just stupid brown spheres. Ugh.

Nevertheless, the actual cartoon part is somewhat consistent with the games. It’s a combination of Mario 1 and 2. Bowser has enemies in his “Koopa Pack” from SMB 1 and 2. But, for some reason, they didn’t get any of the power-ups right. Whenever Mario touches a Starman, he gets “Super Power”, like the ability to lift Bowser up with one hand, but he gets Fire Flower clothes, and doesn’t even actually use Fire Flowers all the time. Did someone not get the memo? There were only a few items in the original SMB, and they managed to get them wrong? A lot of the time, Mario and Luigi just get some stupid necklace or some other generic item from some character that does the same thing as the Starman. The show’s target audience was kids who love Nintendo, so don’t you think they know the difference between a Fire Flower and a Starman? Why not show a Super Mushroom causing Mario to grow huge? Bowser would often escape Mario by using a red potion to open up a door to Subcon, but why didn’t he reappear 10 seconds later like in Mario 2? A lot of the characters they meet are just some cultural reference with a different name, like “Mark Twang”. Yeah, kids just got home from school, and now they want to learn about Mark Twain in the “River World”. They use a lot of sound effects from the games, like jumping and brick busting, but why is it that whenever Toad jumps or runs, he squeaks like a dog toy? Also, he sounds like a complete tool. Eventually, the show expanded to the SMB 3 and Super Mario World realms, but the show got even more childish. Yoshi sounds like a little baby, but at least they get some of the power-ups right, now.

So yeah, it was cool to see the Marios in live action/cartoon, and the show was super awesome for a little kid, so I guess it got the job done.

I’d like to “rap” things up with this article just like how they wrapped up the end of the show. Who could forget the infamous “Do the Mario!” song at the end? Swing your arms, from side to side…that’s all you have to do? That’s so easy! But you know, somehow I doubt people pull off these Captain Lou dance moves at the club to pick up women. Take one step, and then again…oh man, this is rich. What’s really funny is at the end, he kinda stumbles when trying to do the split. Why didn’t they just refilm it? Didn’t they realize that it was going in the end credits? What the crap were they thinking? Also, check out his hammers and wrenches. They keep smackin’ him in the balls when he’s swinging his arms. Is that supposed to be part of the dance? Is bruising your sack part of “Doing the Mario?”

But wait, there’s more! Now this, I’d never seen before, I guess because I don’t live in Philly to get “Philly 57”. Here’s a clip of Captain Lou as…himself…with a Mario hat, and some random shirt. He implores you to talk to your religious leader about drugs, but let’s hope you’re Christian, Catholic, or Jewish! Then, he tells you that, if you do drugs, you will go to Hell before you die. That’s a bit extreme, isn’t it? I’m Jewish, and we don’t believe in a hell, so is Captain Lou telling me to go talk to my Rabbi about this? It sounds like he’s saying that you get to visit Hell, before you die, and then finally die (guaranteed) of drugs in some indeterminate period of time afterwards. That doesn’t sounds so bad. He also says that drugs “can and will kill” (is that before I go to Hell?), and then that they simply “can kill.” So which is it? Look, no one here at GameCola supports drugs, but what happened to the good ol’ “Winners Don’t Use Drugs” FBI warning in the arcades? They didn’t mention anything about going to Hell or dying. What the crap? Forget the War on Drugs, I’m fighting the War on Bullshit Mixed-Messages and Incomplete Costumes (WOBSMIC).

Get ready for adventure and remarkable feats! For some reason, Captain Lou and whoever the crap played Luigi were always dressed in Fire Flower power.

Videogame journalism proves how awesome the United States is.