Hello, my name is Lizo. Even though I’m Paul. No, I know, this is confusing—stick with me here.

I, i.e. Lizo, have just finished playing Kingdom Hearts 358/2 Days, and it seems like a review is in order, mostly because the entirety of GameCola’s coverage of this game consists of “its name is very stupid.” Unfortunately, I’m not very confident in my ability to write funny, and I’m too lazy to actually write my own article, so I’ve enlisted Paul’s help. I’m dictating this review to him, and he’s translating it into hilarity as he types, mostly by inserting the word “nostril” every once in a while. 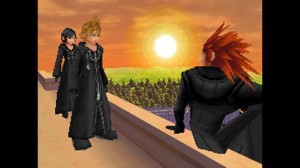 This game was released a few months ago for the DS as a continuation of/supplement to the Kingdom Hearts saga, which, if you don’t know, is a series of action RPGs that combines the characters and worlds of Disney with the silly haircuts of Square Enix. (And, occasionally, Final Fantasy characters, but that’s not the case with this game.) (Nostril. Hah!!) Kingdom Hearts 358/2 Days is set in the time period between Kingdom Hearts and Kingdom Hearts II, and it tells the story of Roxas during his time in Organization XIII. You won’t be able to understand it—or, most likely, this review—if you haven’t played any of the previous titles, or at least, the two main titles. (It’s OK if you didn’t play the GBA-only Chain of Memories; no one else did, either.)

Playing as Roxas, you get to undertake a sequence of missions while working for Organization XIII, meeting the members of the organization and fleshing out the story of Roxas’s life before we first meet him in KHII. The structure of the game basically alternates between completing missions (e.g., killing Heartless, exploring Disney worlds, etc.) and watching cutscenes. You also get to buy new inventory items from a Moogle in-between stages, upgrade your equipment, and synthesize things to make better things from those things. That’s basically the whole game. But that doesn’t mean that the structure is completely predictable—the game actually surprised me quite a few times by tricking me into thinking that I was just going to be doing another mission, same as usual, but then something completely different and entirely plot-driven would happen instead.

There’s also a multiplayer mode, which I only played for about 10 minutes before giving up on because it was so lame. In this mode, you basically just re-play all of the missions that you’ve already done before, and only one player gets to keep any of the earned items and experience. It’s kind of like Fable II’s multiplayer mode, and I don’t mean that as a compliment. The one bonus is that you get to play as characters other than Roxas, which only really counts as a bonus until you realize that all the other characters are also members of Organization XIII, whose inclusion—if I may be blunt—is what heralded the shark-jumping of the Kingdom Hearts series. [Lizo would like you to know, at this point, that most of that last sentence was written by Paul and is no way indicative of her opinion.] 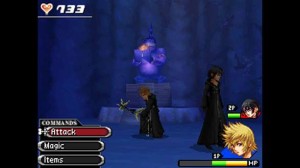 The music is taken entirely from the two big-people-console games, so, while the quality is great, there’s nothing really new or interesting there. As an added audio bonus, though, there are about ten lines of spoken dialogue in the pre-rendered high-res cutscenes, and they actually got the original voice actors to reprise their roles. Seriously! I know it’s hard to believe that Haley Joel Osment didn’t have anything better to do than record dialogue for a portable videogame, but there you go. Also: Christopher Lee, which is a little more impressive.

The controls are a little wonky, at least at first. Basically, there aren’t enough buttons on the DS to handle this game, and you end up having to scroll through too many menus and press too many buttons just to use a potion in the heat of battle. There are some hotkeys, which is extremely useful, but, again, it all takes some getting used to.

In lieu of any sort of transition, I’m going to skip now to a bulleted list of reasons why you would or would not like this game.

Reasons Why You Would Not Like Kingdom Hearts 358/2 Days:

So basically, I thoroughly enjoyed playing this game. It was a bit longer than I thought it had to be, but it was engaging all the way through. Also, after playing it, now I kind of really want to play the upcoming PSP KH game, Birth by Sleep. Unfortunately, I don’t own a PSP, and since there’s nothing else on the PSP that I want to play, that probably won’t be happening. Anyway, if you like KH and you don’t think Organization XIII was the complete and total ruination of the series, you should check this game out!

A Pac-Man Arrangement:There once was a man named Pac-Man,And rehashing old games was his plan.There was no aim for fun,And his games all bar none,Were destined to enter the trash can.But Arrangement i