Hello everyone! It’s time again for the latest installment of “testgame.exe: Making the Adventure!”

No new plot this month (sadness!), but instead I’ve given you a bunch of new graphics and animation (rejoicing!). Plus, just about everything new in this update is consolidated in the first three rooms of the game. There are some dialogue changes and edits later in the game, but nothing too revolutionary, so—you lucky players, you—if you want to see the brand new things that testgame has to offer this month, you don’t even have to play through the whole game to do it! Yay!

And now on to some details of this month’s update:

Absolutely every interaction in Paul’s room is now animated. Wait…does that mean…? I think it does! As of this month, Paul’s room—the first whole room of the game—is done! Wow!

I did a bunch of other small animations, too. The forest screen outside Paul’s door might possibly be finished as well, but I can’t make any promises.

In other news, Real-Life Paul and I decided to completely revamp the whole squirrel thing in the second forest screen. This was probably, oh, I don’t know, the second or third thing I programmed when I was first starting to play around with testgame,1 and I mostly only put the squirrel and the blue stone in there in the first place to give me a reason to learn how to use objects in AGS.2 But now everything’s changed, and hopefully it’s a lot better and makes much more sense. I’m also kind of in love with the squirrel’s animation right now—I think it actually looks almost believable. Except for the digging, maybe. In any case, the animations here are still a bit rough, so I’ll be touching them up before the next update.

Also, I finally made the inventory window completely my own (that is, without using mismatched recycled graphics that came with AGS). It’s not beautiful by any means, but it’s not quite as painful to look at now. I also added some extra functionality that makes navigating through the inventory much more intuitive (to me, anyway): Now the scrolling arrows only appear if there’s actually additional inventory to scroll to, and they disappear again when you scroll to the bottom/top of the list. Not being fluent in computer, I am extremely proud of myself for figuring out the coding for this. (And I think the arrows look rather nice, if I do say so myself.)

So all in all, it’s been a very satisfying month. We’ve got some more (LOTS more) plot stuff in the works, so that should be making its way into the game soon. And there will continue to be more revamping of the very earliest parts of the game, because it turns out that the things I wrote five years ago, without knowing at all what the heck I was doing, don’t really fit with the more recent parts of the game! Haha, crazy!3

So check out the game! I’m not giving you save files this time, because I’m lazy, and because most of the new stuff is at the beginning of the game, anyway. 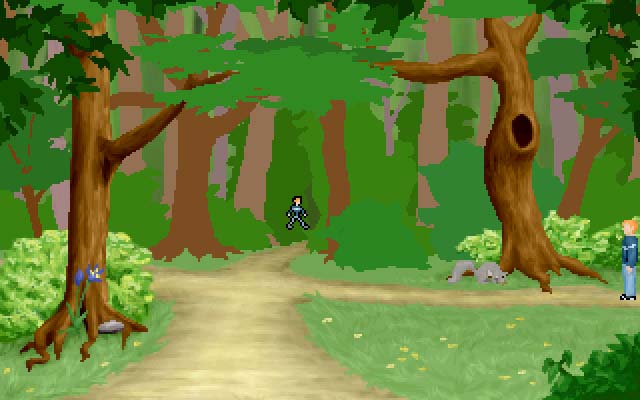 1. Fun bit of trivia: Did you know that this central forest screen was the very first room I ever created in AGS? Weird, huh?

2. You already knew you could get a blue stone from the squirrel in this screen, right? Maybe you didn’t, because it was completely unintuitive: Up until this month, you had to talk to the squirrel twice, and he would drop a stone from the tree… Yeah, random, I know.

3. And speaking of things that are going to be revamped soon, here’s something that’s going to be gone REALLY soon, like probably with the next update. It’s a hidden “Easter Egg,” if you will, that I put into the first room of testgame many, many years ago, just to prove how creepy and stalker-ish I could be with regards to GameCola’s own Editor-in-Chief. Talk to the PS2 a bunch of times. I dare you.

Welcome back to that immensely popular and even more enjoyable article on the 'Cola that all that cool kids call SUPER THUMBS! Since this is another one of those ever fabulous action packed JANISH edi