I’ve mentioned this before, but I like to take notes when I’m playing a videogame, to make sure I can remember all my most gut-bustingly hilarious thoughts when I sit down to write my eventual review. This line appears near the top of my notes for Jake Hunter Detective Story: Memories of the Past:

Jake Hunter: For people who’d rather be reading a Sue Grafton novel than playing some lame-o videogame.

I wrote that when I was about halfway through the second case and was really getting sick of what appeared to be the adventure game equivalent of an on-rails shooter, with the player having only the bare minimum requirement of input into the game’s progression. And, to be fair, that pretty much continued throughout the entirety of the game. The puzzles are easy to the point of near nonexistence, but even then the game holds your hand through them. For example, if you try to talk to someone who can’t progress the story for you at this particular moment, Jake will say something like “I didn’t have anything to say to Jimbob; I needed to talk to Bartholomew.” Or, before you try to change locations, Jake might say “There’s someone I need to call before leaving.” (Also, if the impossibly easy puzzles are still too difficult for you, the game comes with a built-in hint system, in the form of Jake taking a cigarette break to ponder his situation and give you the answers.)

The game actively prevents you from straying off course, and in nearly every circumstance, the only thing you can possibly do is the one thing you need to do to progress the game’s story. 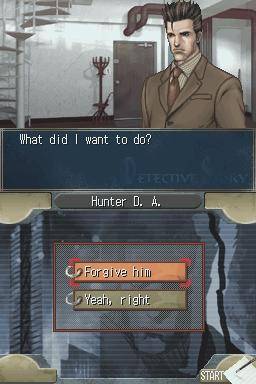 The game still grew on me, though.

Jake Hunter Detective Story: Memories of the Past is a game that I’d love to call a rip-off of Phoenix Wright, mostly because the game is the exact same thing as Phoenix Wright, minus the courtroom scenes. You play as Jake Hunter, an ace detective who talks like he’s out of a 1940s film noir, as he takes on cases, investigates them, and brings them to resolution by hitting people. You have a cute and wonderful assistant who helps you out on your cases, and who appears to have a developing relationship with our hero. You have poke-through-the-menu gameplay: you tap on the objects you want to examine, you tap on the names of people you’d like to talk to, you tap on the words you’d like to say to them, you tap on locations you’d like to visit, and you tap out your accusations when you think you’ve got everything figured out. You don’t get to shout into your DS’s microphone, but in almost every other way, Jake Hunter‘s gameplay is equivalent to that of Phoenix Wright.

I’d love to call it a rip-off, but here’s the thing: Jake Hunter actually predates Phoenix Wright. By nearly 20 years. The first Jake Hunter game was released in Japan for the Famicom Disk System (a floppy disk attachment for the Japanese NES) in 1987, and its had iterations on the NES, the Saturn, the GBA, the PSP, and even on cell phones. It is far more likely that Phoenix Wright is actually based at least in part on this series. Unfortunately, all of those games are Japan-exclusive, and it looks like it’s going to stay that way for now, as sales of this game were poor, and the company itself has said that it’s not looking to localize any more Jake Hunter titles for the States.

Jake Hunter does have three things that Phoenix Wright doesn’t, though, besides its lack of any challenge whatsoever. For one thing, it has fight scenes! Woo-hoo! Action! …of course, these fight scenes are also poke-through-the-menu based, with the player selecting from options like “jab,” “uppercut,” and “dodge.” Also, since Jake Hunter may actually be the easiest game ever made, there doesn’t seem to be a way to lose these fights—or, at least, I never did, and I’m not very good at videogames.

The second thing this game does that Phoenix doesn’t is that it has many ham-fisted secret code puzzles for the player to figure out. Ham-fisted in implementation, anyway—the developers might as well have had a voiceover announcer say “and now, ladies and gentlemen, it’s time for cryptography!” at the appropriate moments. Of course, I’m probably just bitter because I really hate this kind of puzzle because I’m really bad at them, and I had to ask for my girlfriend’s help with every one.

And the third thing: Jake Hunter has bonus joke cases for you to play if you get tired of the main game. These cases are the total opposite of the game’s story mode. Instead of the gritty, brown-and-gray style of the game proper, these cases look more like an episode of Fruits Basket. (That’s the anime about a family of people who, if they get hugged by a member of the opposite sex, turn into rabbits.) They’re also really really hard. You don’t get your hand held in these cases; if the game takes your hand at all, it’s only so it can rip your arm out of its socket and beat you to death with it. In these cases, you interrogate witnesses, examine the crime scene, and then you’re asked to deduce everything completely on your own. There’s no Jake saying “and then I thought to myself, hmmm…all of the pieces fit together…Mr. Billingsly must be the killer!“; instead, you get to navigate a series of multiple-choice questions about whodunit and how, and if you get anything wrong, your assistant kills you. I’m serious! I got my first “deduction” wrong, and she stabbed me in the neck with a poison-filled syringe! Better hope you saved, too, because you’re going back to the main menu if you screw up here at all. 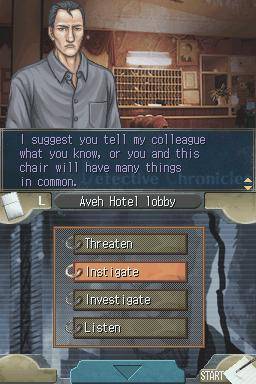 Despite the fact that these cases actually posed some challenge, I didn’t find myself enjoying them as much as the game proper, mostly because they posed some challenge—they weren’t much fun for me because it took too long for me to come up with any answer at all, and my answer was always wrong. And yet, the main cases are way, way too easy. Clearly, this is a game that needs to find a happy medium, and stat.

So what’s to like about this game? Does it even count as a game? I guess it depends on your perspective. Some people—the kinds of people who dismiss Phoenix Wright because there isn’t enough </any> action—seriously do not like this style of game, and if you’re that type of person, this game is only going to reinforce your opinion, as Jake Hunter‘s very minimal gameplay really only serves to drag you through its story. Myself, though, I seriously started to get into this game in around the third case. I stopped thinking of the characters as boring caricatures, and started becoming attached to them. The story picked up and became fun to pay attention to. The mysteries were fun to solve—even if I did very little in-game to actually solve them, I was still able, in real life, to piece things together myself, before Jake blabbed the killer’s identity.

Here’s my secret: There’s a certain mindset you have to get into when you’re playing this game. You can’t think of Jake Hunter as a videogame starring you as a kick-ass detective, or as a game where you, personally, are going to figure out who the Bad Guys are and bring them to justice; you need to think of it as a different way to experience a detective story. It’s not really fair to say that the game is only “for people who’d rather be reading a Sue Grafton novel,” because the presentation of the story is entirely different. You may not have much control over the game’s progression, but you have enough that you feel like you’re directing the story, rather than just reading a story that someone else has come up with. You aren’t Jake Hunter yourself, but you’re not exactly just watching Jake do his thing, either; rather, you, the developers, and Jake are all working together though this series of noir detective stories, and if that sounds like fun to you, you’ll probably enjoy this game.

(Side note: If you decide to pick up this game, play the “Memories of the Past” case first. I didn’t, and I ended up playing the game wrong.)