Nancy Drew: Stay Tuned for Danger is the second Nancy Drew game, following Secrets Can Kill.  It stars Nancy Drew, on the set of a soap opera in New York.  Someone has been trying to kill Rick Arlen, the show’s star, and she’s been hired to find out who.  Along the way, she meets a colorful cast of characters, like Dwayne Powers, the enthusiastic talent agent; Mildred Strathorn, the crazy old lady who owns the network; and Lillian Weiss, the really mean director.  Of course, all of them have a reason to want Rick dead.

This is the first “real” Nancy Drew game in many fans’ minds, because the game design underwent a pretty thorough overhaul.  All of the various changes that were implemented were for the better, and continue throughout the series.  The changes include an emphasis on plot (instead of word puzzles), much longer gameplay, NOT having to switch CDs ever, being able to switch the time from night to day, calling your friends for hints, and a dramatic confrontation with the culprit.

Most importantly, this game makes the successful transition from 2D to 3D.  Sure, the characters look like they’re made out of plastic, but that’s par for the course in a 1999 game.  The game easily makes up for that by having scads of characters; even ten games later, this game still held the series record for most characters. 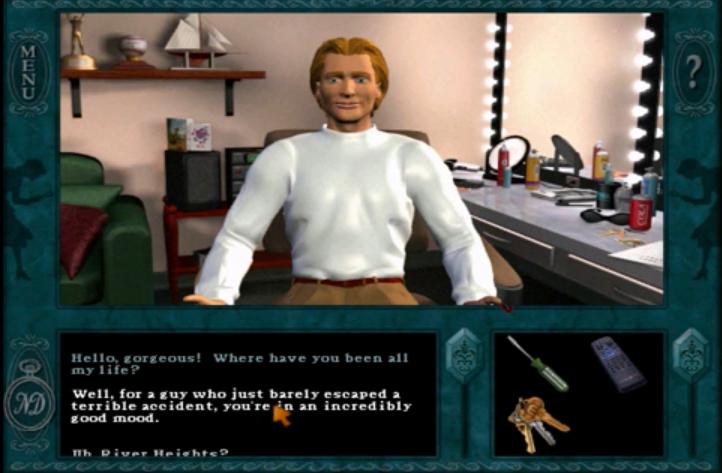 Rick is kind of a sleaze, sad to say.

The only problem that stands out with this game is the semi-random triggers.  If you don’t look at certain things while exploring, the plot doesn’t progress.  This can lead to annoying scenarios where you have to spend 30 minutes looking at everything, in hopes of finding the one thing you missed during your first round of investigating.

All in all, this is an excellent game, and it is clearly the start of the series proper.  The other games followed in its footsteps, and for good reason. In fact, I like it so much that I secretly want to re-record my video walkthrough for Stay Tuned for Danger, just to have an excuse to replay the game.

Have a nice day, and like Rick says, “Stay beautiful!”

Action DooM 2 is an incredibly well-crafted piece of art, but it's also chock full of gameplay.