Hey, remember last November, when Michael Gray said he was done playing Final Fantasy VI Advance? He said something like, “Over 30 hours and 111 videos is enough for me!”

Boy, was that a stupid thing to say!  Because, as it turns out, he completely forgot to play through the Dragon’s Den, a bonus dungeon that is exclusive to the GBA release.

So he played his way through the Dragon’s Den. And then it turned out that he completely forgot to do the Soul Shrine, a second bonus dungeon that is also exclusive to the GBA release. At which point, he set his GBA on fire. 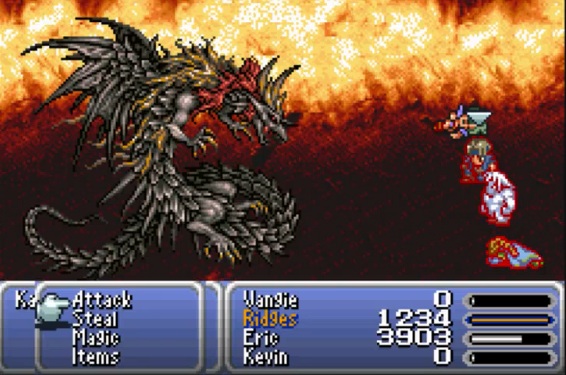 Recently, the GameCola Youtube channel released all 28 videos of Michael playing through the two bonus dungeons. That’s about four and a half hours of gameplay, despite the fact that he used cheat codes to get all his characters to level 99 (and occasionally skip over fights that were too tough).

Because there is no new plot material in these videos, Michael tries to keep things interesting with witty commentary on thought-provoking topics such as, “Which characters can be cut from this game?”, “Is it worthwhile to get a full bestiary?” and “When is this game ever going to end?” Also, about three videos before the end, he learns that there is a spell that brings characters back to life at full health, and he screams in frustration because he’s been using the dinky little “revive a character at 1% health” spell for the past thirty hours. Good times.

If you liked Michael’s original run of the game, or if you’re interested in seeing the bonus dungeons of the FF VI GBA version, or if you just want to see Michael suffer through a game he thought was finished, please start watching from video #112 of the video walkthrough. What follows here on this page is a random sampling from the 28 new videos, starting with the first one.

It’s weird how things change. I was recently looking back over the archives of "Gamer Girlfriend," which date back to early 2008, and I was surprised to notice a gradual but distinct progression in ...