OK, let’s lay everything out on the table: I own a DS flash card. I have, amazingly enough, never used my flash card to play pirated games. I’d like to say that this is because I am a principled fellow who believes in giving developers their due, but my motivations are less noble: I simply don’t have time to pirate, because every time I pop in my flash card, I immediately launch a polished little homebrew roguelike with the misleadingly non-intimidating title Powder.

Developed by the industrious Jeff Lait, Powder began its life on the GBA in 2003 before migrating to several other platforms. If the adorable Chocobo or Pokémon licenses have ever tricked you into playing one of the “Mystery Dungeon” games, you’ve had a taste of the Japanese variant of the roguelike genre, but Powder draws more heavily from the Western (and possibly more brutal) branch of the family tree.

For those lucky individuals who have avoided the genre, roguelikes are games about randomly generated dungeons, turn-based monster-slaying, loot-gathering, complex item interactions, and—most of all—dying. I don’t mean this in some sort of thematic literary sense, with your little hero pondering his own mortality every time he hews off the head of a goblin. No, you will simply die and then start over from the beginning. Frequently. Within a minute of starting a new game. At the hands of the first enemy you encounter. Sometimes without encountering any enemies at all. (I will risk public shame by admitting that I’ve never made it past Floor 14 of 25 myself.)

Lait has done an impressive job of bringing this masochistic yet addictive experience to handheld platforms. The typical Western PC roguelike has you hunting around the entire keyboard trying to remember the key for “gaze at item intently but with mild apprehension.” Through a bit of design wizardry, Lait replaces this with an effective button-and-stylus interface. The graphics are entirely non-animated, but are at least customizable: the current default tileset (created by Akoi Meexx) is quite attractive, but purists can switch to an assortment of “classic” (i.e. “ugly”) tilesets if they so desire, including a traditional “graphical ASCII” set that will delight the senses with menacing @s and &s. Audio, however, is completely non-existent, so feel free to provide your own soundtrack. (I recommend creating a Powder-specific playlist so that your concentration is not shattered at a key moment by some forgotten horror from the depths of your mp3 folder.)

I could now begin prattling on about the gameplay, but a simple “adventure log” would be more illustrative of the typical Powder experience:

The mighty warrior Bamft enters the dungeon, clad in the shining armor of his ancestors (Leather Tunic). A door looms ahead: Bamft kicks it open and bravely rushes forward, hacking his way through a mob of vile horrors (sleeping rats and snakes) with skill and precision (repeatedly missing while they continue to sleep).

His foes vanquished, Bamft ventures once again into the corridors. Distracted by his wounds (stumbling through the dark without a torch), he is caught unawares by a raging beast of darkness (accidentally stabs a non-hostile Kiwi). He fights bravely (runs like mad), but the beast ultimately overcomes him.

Huh, OK, so I didn’t even make it off the first floor. Hold on, let’s try again:

The clever thief Bamft (no useful skills whatsoever) lowers a rope into the dungeon. He slips in unseen and- 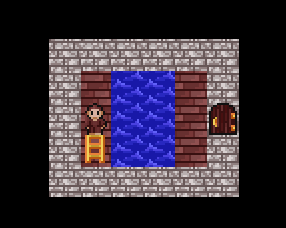 Son of a bitch. Wait, it’s only two tiles; I can probably get across without having to drop all my equipment. 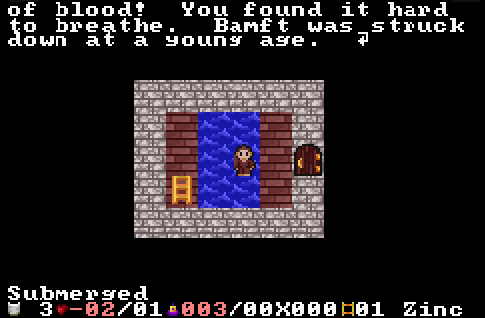 God dammit, seriously!? (Should have taken off my tunic and tossed it across.)

This is all standard roguelike procedure. You will throw many a stillborn hero at the dungeon before you finally find one that sticks, which is unsurprising considering that stillborn heroes are typically more slippery than sticky. (No need to get up; I’ll show myself through the gates of hell for that one.)

Much of the difficulty comes from the fact that everything is out to kill you. I have had my innards dissolved by acid potions that I hoped were healing potions, been blown apart by ricochets while testing unidentified magical wands, and incinerated in mid-stride by a god whose wrath I had aroused by killing innocent mice. Yes, you can be suddenly killed by divine fiat if you don’t carefully juggle your approval ratings with the various deities. (Although in a curious inversion of Pascal’s Wager, you can gain complete immunity from divine punishment by choosing not to worship any gods at all.)

All of these complex possibilities result in a wondrous amount of “emergent gameplay,” which is a roguelike development buzzword for “running around in a panic while everything collapses around you.” You gradually learn appropriate safety procedures for probing the unknown, but one mistake can bring even a leveled-up well-equipped powerhouse to his knees. It is precisely these tense moments that make the genre so engaging and replayable, and provide for many a story amongst roguelike fans. I don’t wish to rob you of the joy of learning things the hard way, but I feel that closing this review with a cautionary tale of my own can better convey the joy to be found in your own demise.

I remember the first time—perhaps the only time—I successfully killed a lich. I had opened a door to a small room, and there stood the abomination, horrible incantations rasping through its teeth. In a panic, I threw a smoke potion into the room and blindly fired every wand I had into the fog. When the smoke cleared, I was stunned: there lay the lich, his treasure mine for the taking!

But then: that twisted compulsion. You can eat dead monsters in Powder. In fact, it’s a necessity. You must eat to stave off starvation, but the succulent flesh of some creatures can also confer special abilities or traits.

And so I drew near the dead lich. I knew what I was about to do. I knew that I shouldn’t do it. But I knew that I had to do it. I crouched over the body, cramming the rotted bones down my gullet, still steaming with foul magic. If I remember correctly, I gained the “breathless” property, meaning that I was now immune to choking, drowning, smoke, and poisonous gas.

However, I was also afflicted with an allergy to silver and all things holy…and I was wearing a lot of silver. I threw my holy silver spear to the ground, tore the silver necklace from my throat. Still, I burned! I shook the crown off my head, pulled the ring from my left hand, the ring from my right—Oh god, it won’t come off.

Yes, I had a cursed silver ring on my right hand that I could not remove. I don’t remember precisely how my hero met his end. He may have immolated himself while reading all the unidentified scrolls in his inventory, hoping one was a Spell of Uncurse. He may have run through the halls desperately seeking something, anything, that could save him. (A Wand of Polymorph to turn himself into a slug, thus shedding the cursed ring due to a lack of hands!) Or he may have simply lain down and accepted the punishment for his crime against nature. Regardless, his bones are now powder on the dungeon floor, mixed with all the others who have gone before him.

GameCola is available on your phone! Kevin Leacock has the details.