Dragon Ball Z is doing pretty well for a show that ended in 1996. Not only are they still making videogames based off it, but it’s also going to be re-aired this year on Nickelodeon. Of course, this was announced in a press release that also said Nickelodeon is going to be running Teenage Mutant Ninja Turtles, the Kung Fu Panda Show and a Jimmy Neutron spin-off starring Sheen and George Lopez, so maybe that was just a weird April Fools’ Day joke.

Dragon Ball Z: Attack of the Saiyans is the latest DBZ videogame, and it’s a turn-based RPG instead of a fighting game. It follows the plot of the series from the Piccolo Jr. Saga in Dragon Ball to the end of the Vegeta Saga in Dragon Ball Z. If you haven’t seen the show, the game will probably make no sense to you whatsoever. Neither will this article, most likely. 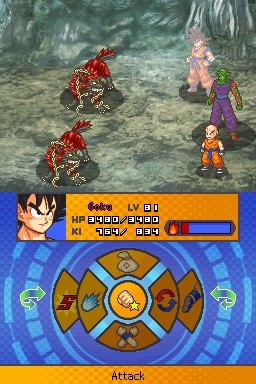 The big thing about this game is its focus on plot, because it contains a lot of material that was left out of the TV show. Remember how the TV show suddenly skipped ahead three years, after the King Piccolo Saga? Then, after the Piccolo Jr. Saga, it suddenly skipped ahead SEVEN years? Well, the game assumes that something interesting had to happen in the missing ten years, so it makes up a different plotline for all of the various characters to go through during the break.

The new plots are interesting to see, even if none of them are particularly awe-inspiring. The best one was about Goku having to beat up Raditz for causing trouble in Hell (twice). Most of the plots deal with the characters from Dragon Ball who magically disappeared from the series when Dragon Ball Z started. It’s nice to see the forgotten characters get one last chance to shine! Unless, of course, you’re like me and didn’t like Dragon Ball, in which case you’ll be confused as to who the characters are, and when you face off against enemies like Monster Carrot (a one-episode villain who turned people into carrots), you’ll remember why you didn’t like Dragon Ball.

The plots that are actually from the TV show, of course, follow the show near-exactly, with pictures peppered throughout the cutscenes for good measure. You can skip these cutscenes at any time, which is really good during a few extra-long episode reenactments. It’s also good if you don’t want to suffer a fanboy heart attack when some of the lines are misquoted. For example, Vegeta’s well-known “It’s over 9000!” line is replaced with “It’s over 8000!”. I started booing my DS when that happened. (I later started cheering my DS when two of the equippable items were called “CHA-LA” and “HEAD-CHA-LA”). 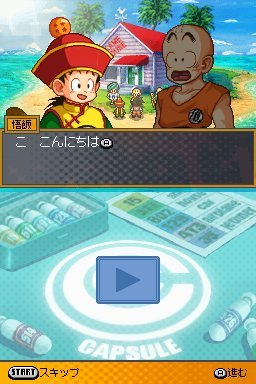 The other big thing about the game is the fact that it’s an RPG. You know, fighting in over 9,000 near-identical battles with your heroes so you can level up and get new equipment and abilities. That’s what RPGs do. There are six characters in all (Goku, Gohan, Piccolo, Tien, Yamcha and Krillin), and your party has a three-member maximum per battle. It’s a pretty typical battle system, and there aren’t any problems. My favorite feature is the “escape battle” option, because the game is super-friendly and ends the battle if only one character escapes successfully, which pretty much guarantees that you can escape any battle on the first turn by having all the characters run away.

Let me see…what else, what else? The only voice work is the characters shouting the names of their attacks during a battle, and the original Japanese voices are used, so you can learn how the names are supposed to be pronounced. For example, “Kaio-ken” is not pronounced “Ki-oh-ken”; it’s pronounced “plot con-ven-ience”. Also, half of the all-male cast is voiced by girls, so their voices sound kind of funny.

It’s about a 20-25 hour RPG, which is…long? Short? I don’t know how long RPGs usually are. Anyway, it’s a fairly solid/standard RPG with spot-on good graphics, and it was a pretty enjoyable way to spend my Spring Break while my computer was in the repair shop. If there’s a sequel, I’d buy it.