“Get an iPod Touch,” I was told. “The games are inexpensive, and there is something for everyone.”

Well pardon me, disembodied voice. Not all of the decent games are cheap, you know. And I’m not exactly making millions of dollars every day because I learned how to play the guitar and my balls haven’t dropped.

You still need to take out a second mortgage to afford Doom: Resurrection.

But, the “something for everyone” part… I guess you’ve got a point.

There are applications ranging from eBanking to keyboards and musical instruments (my favorite being the NES keyboard). If you’re willing to jailbreak your iPod, there is also a range of unofficial applications, including a port of the amazing freeware Elite Beat Agents clone, Osu!

Also, does full-speed NES emulation sound good to you?

The iPhone and iPod Touch share an app library that puts the DSi to shame. But remember, very little of what it offers is anywhere near good—a hundred Tower Defense and Bejeweled clones later, you do wonder if you’ve just bought a casual gamer’s system (hint: yes you have).

So what is there on offer that’s worth your time and money?

But that is a review for another time. Today, we discuss Skirt Lift.

Aye, there seems to be a trend of slightly retarded perverted games rearing their way onto portable platforms. Nothing better than letting the general public know just how desperate you are.

Skirt Lift focuses on the epic struggle of man…one man…you. Well, not really you—just your finger.

It is a masterpiece that provokes great thought, drawing the gamer in with a relentless storyline and a vicious plot twist that could be the lovechild of Neighbours and Home and Away.

It begins…in a room. Like all good stories do.

A woman, standing opposite. She is not sure why she is here, and her face seems to resemble Kermit the Frog’s, although only slightly. She’ll probably hate me for saying that, but every time I gaze into her eyes, I hear Kermit sing about a “fork in the road.”

She looks at you, her eyes following the movements yours make. She knows you’re into her.

You feel unsteady, you take a deep breath, and you…lift her skirt up.

“…what? Hold on, I lift her skirt? Is she OK with this? I mean, she’s just standing there. I’m so sorry miss; I’m obviously just sick in the head, lifting your skirt like that.”

But she just doesn’t seem moved at all. No matter how much time you spend lifting up her skirt and gazing at her colorful underwear.

“Of course! Her underwear color is associated with elemental magic. How could I be so dumb?”

Choose an “energy” type that corresponds with her underwear color, and then you have to tap after exactly three seconds. If you’re successful, she gains a level (although I’m not sure what she gains a level of).

She can only level up once a day, unless you get three seconds on the dot in your further attempts. This is a lot harder than it sounds.

The incentive to play further is that she transforms into a “super girl” at level 30. Surely I didn’t play the game for thirty days– 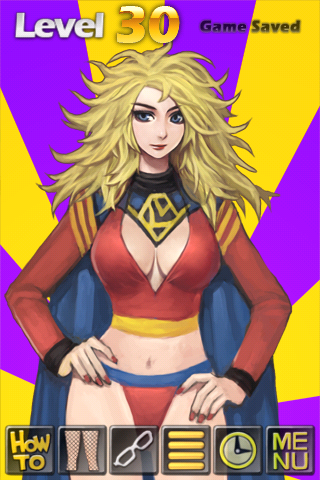 Skirt Lift is more of a widget than a game, and it deserves little-to-no praise whatsoever. Instead of Skirt Lift, consider Angry Birds. I don’t feel like writing anything else, so on a random note, I like that Pac-Man song by The Adventures of Duane & BrandO.

- It seems as though a Sims game is headed towards the realm of Playstation 2.  It will, more or less, be a port of the PC game of much fame, with somewhat revamped graphics to make use of the PS2's