I don’t know anything about romance-sim dating.

There it is ladies and gentlemen. That’s my return to videogame journalism after a year of being out of the game, and to top it all off, the only reason I reviewed this game is because I was BORED.

Wow. All the dominoes are lining up for a truly half-assed review. It’s like going to work drunk and just saying “Fuck it. I’m drunk, gimme the phone and I’ll field customer support,” and I accidentally pushed speaker phone. Yes, dicks and dames, Meteo Xavier is back. Don’t call it a comeback though, because this is going to be a ladle of weak-sauce. The paramount example of the wall-flower. The problem was, I put all that energy into the chiptune podcast theme, which was the first commissioned work I’d done since my album dropped and I overclocked it.

At this point, I’m going to forgo my planned digression into hairy women and start reviewing the game. I don’t remember what it was called. That is the level of impact it had on me. 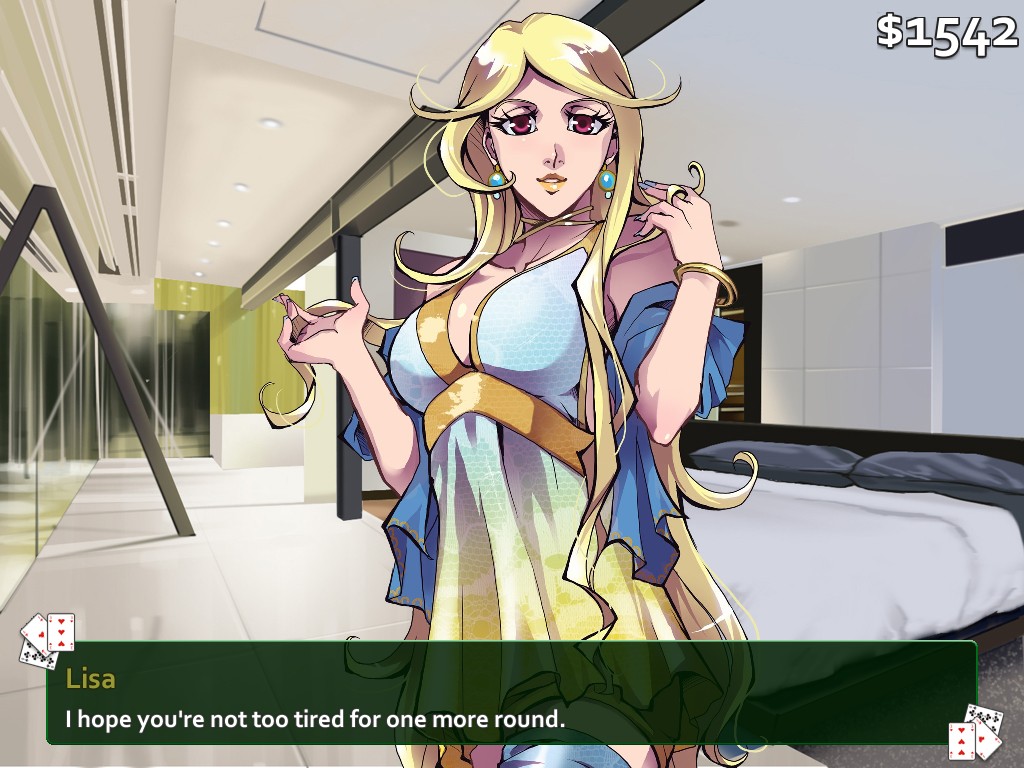 Apparently you’re a guy in New York city who wakes up one…afternoon, to find himself with 200 bones in the middle of Central Park with vague memories of your neighbor driving over your dog and your girl fucking the milk man. OK, well there’s two things wrong there. First of all, no one in NYC drives unless they’re paid to, and secondly, we still have milk men in this day and age? What?

Now you’re 30 years old and the economy sucks scrotum. So you play poker to get by and, wow, do you get by.

I would’ve definitely loved it if the storyboard people (or person, or half-person if there was even that much effort put in) came up with a genuinely awesome reason you needed to do this. For example: say you were deep in debt with La Cosa Nostra, and if you didn’t cough up $25,000 in a week they would impregnate your wife and threaten to sell the child’s organs, turn him in a cyborg murder machine to take out the U.S. government, and resign complete executive power to Sicily. Then they realized they have to get you married first, and offer up the boss’s daughter, because on her wedding day you can ask him for any favor you want, so you ask to have your debt erased. The Don says “no,” so you make him an offer he can’t refuse (using the term lightly) by beating him in a high-stakes poker game. You win and they realize you have serious skill and put you in charge of a casino where you roll-in the cash and make assassination attempts via the cards. Eventually, your luck runs out when that same cyborg murder machine from the future comes to kill you and take out the president once and for all. Then you have to beat a logical machine at a game of chance to save the country.

Holy shit, that sounds awesome, and it would’ve been, except the guys at Tycoon Games never came up with it. Now there is not much incentive to play this game.

Actually, I must say, once I got through all that linear nonsense to a menu of non-linearity, the game picked up some. The story and tangled web going on with all these people was definitely starting to grow on me, but there was one major problem.

It’s like I was getting into a quarter-decent story of something that poker kept interrupting. Seriously, you’d just bust out the cards at any near random opportunity and it took me out of the game completely. The card game itself…well, I guess you have to have an addiction to poker to really appreciate it, was OK, but wow, I’ve never seen a game so distracting…with the distraction being the whole point of the game itself! That’s pretty fucked up! 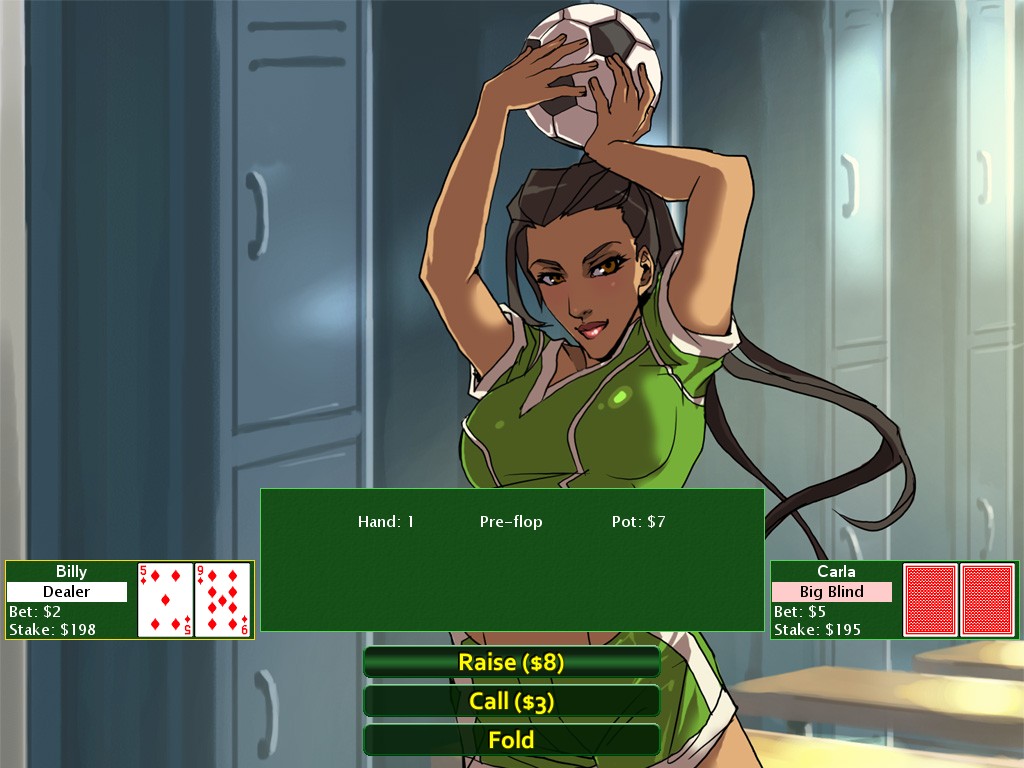 The card game itself was decent enough, but I felt like it needed more work. The first game I played, I won pretty easily…but I don’t know how. Something about the way the card game is set up seemed difficult to read. I won with a pair of something, but I never saw it anywhere. Eventually, I figured it out, maybe I’m just not used to Texas Hold’em or whatever it was they played, but, for a newbie, I found it pretty distracting and would’ve probably shut the game down after all.

This game is touted as a “poker/dating-sim” game, but the dating sim aspect, as I was playing it, was virtually non-existent. It’s more like “poker/build-up-to-strip-poker.” The strip poker engine seemed a bit broken too. More than once, the person I was strip-poking was offering up and taking back, offering up and taking back, taking it off and putting it back on, offering it up and taking it back, and then taking it off again for some reason. That’s a mild exaggeration, but the fact that the game really wanted me to see these covered-up, naked women by almost cheating at the game, is not.

The graphics were pretty good and the women were hot. I was really starting to dig the story before it ended way too damn quick, and kept shifting the story and throwing away characters like the old man from the beginning. I wonder whatever happened to him. I hated my character. He was so damn whiny and got into situations I didn’t believe for a second. I also hated how coincidental everything was in the beginning. It was embarrassing. A lot of the writing sucked too, but eventually got better. The changes in gameplay-the strip poker and the poker tournament-are decent changes of pace, but I just about walked out the minute “Fringe 1999” came up. I mean, forgive me Jesus, but Jesus Christ! C’mon.

The music was surprisingly good but short, immemorable, and had a habit of dropping out if you switched to a  saved game. In this game, you can save anywhere, which is…great, I guess.  You can also change preferences whenever you want, which was nice for me because I was writing this review while I was playing it. Unfortunately, it seems like the extremely easy save/load system can be easily manipulated during mid-poker game since the hands don’t often change.

There are also, apparently, multiple endings. I got the one with the red-haired chick. I did not bother to seek out the other ones because that one seemed like the most logical. The man behind Tycoon Games was good enough to let me view video endings for the other girls, but honestly, I think I got the most satisfying ending of them all on the first shot. 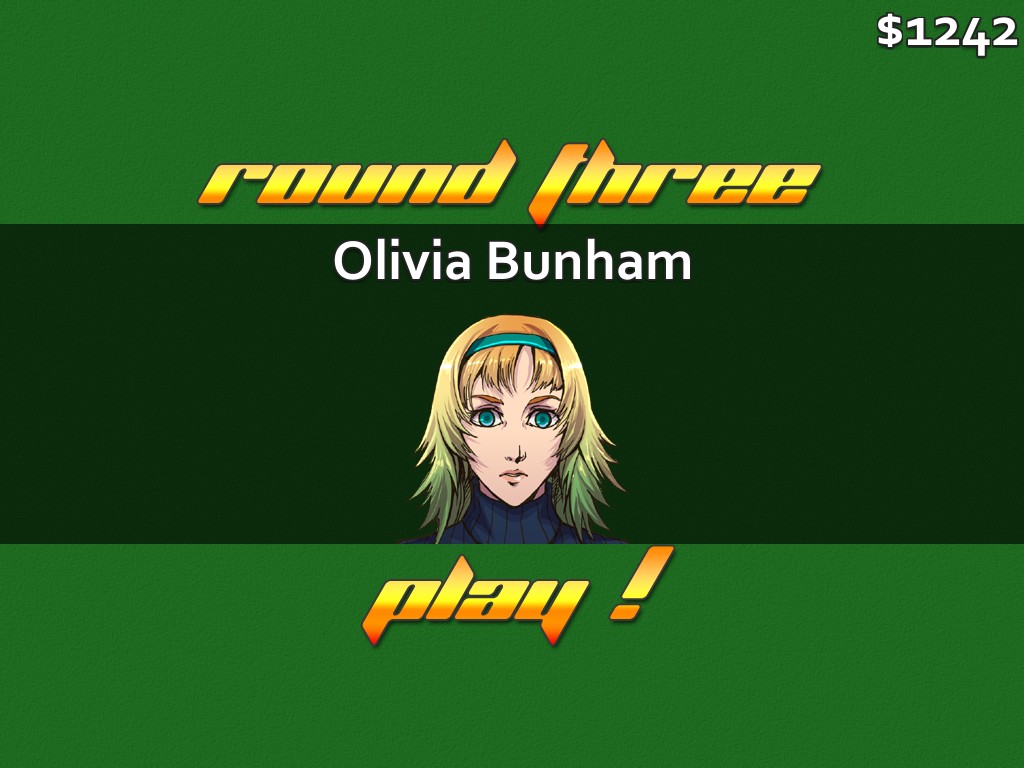 The game itself was OK, largely because I didn’t pay for it. If I did pay money for it, I’d be disappointed. I was done with the game in a few hours, and a “poker” game with little actual “sim-dating”  is not going to bring me back for more. Honestly, it either should have been a poker game, or some sort of choose your own adventure detective story; at least then it would’ve been focused.

Maybe I’ve just been out of the shareware community for too long, but I can’t really see many people ponying up even couch-cushion prices for a game like this. It’s OK, but there’s so little that makes it worth playing, and what little there is keeps stubbing its dick on tables and chairs. Let’s get the numbers out of the way.

Oh whoa, I guess I only have to give one number now. Ummm…let’s make it:

Of course, knowing me, I’d do that for every review I’d write.

Mega Man 2 is widely regarded as the best [Mega Man / NES / video] game of all time. There's no way to write a positive and original review when all the good adjectives have already been exhausted by