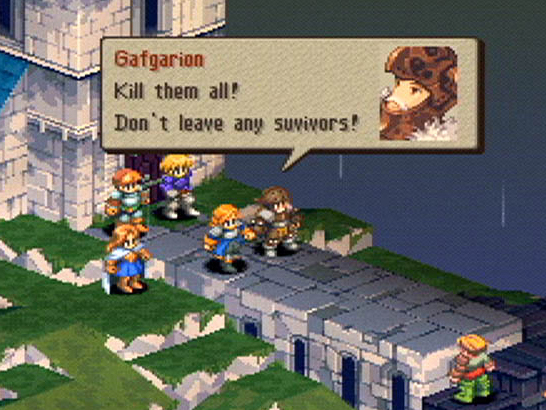 Warning: Learning “curve” ahead. “Curve” in quotations because it’s more like a straight, inward plummet to the core of the Earth.

More accurately, imagine yourself having sex with a 600-pound woman (or man, if you prefer) who insists that you be on the bottom, strapped with latex and leather. You can’t move, you can’t breathe, the pain is excruciating yet somehow balanced out by the pleasure—you truly are held in bondage for the ungodly duration of the game.

I referenced this in one of my first reviews for GameCola in La Pucelle Tactics, but this game, which I consider to be in the same Final Fantasy league as Final Fantasy Legends, Final Fantasy Adventure and Final Fantasy Mystic Quest (because, in 1997, it could have fit among those gaidens fairly well, though it would’ve been a stretch), just about broke me for strat-RPGs and Final Fantasy gaidens altogether.

Developed by the group that does all kinds of cult-bait RPGs for the hardcore like the Ogre Battles series, FFT is not a throw-off, play-it-if-you’re-bored gaiden like those other half-bred Final Fantasy titles. This game is as serious as an abortion, right from the fucking get-go. You get in a battle that is so easy, it completely spoils you to the real world of pain you’re about to free-fall in. Hell, the first eight hours of the game (BTW, each hour of gameplay recorded roughly translates to two hours of effort) is a flashback to what is easily one of the most convincing incentives for a best friend to split from you and become a half-ally/half-enemy I’ve ever seen. This game is dark as black-face, and the overarching difficulty of playing accentuates it and makes for a genuinely paradoxic experience of masochistic pain and trace elements of orgasmic joy.

Maybe “difficult” is the wrong word, as I wager the real challenge of this game comes from the lack of balance in the A.I. This game is Final Fantasy V chess and you’re playing Deep Blue, motherfucker. You basically will not beat this game unless you’re Russian, because at first you hardcore players might rejoice that the enemies are finally on the same level playing field you are, until you realize every time you fight them, they are always several levels above you and have access to the programming time tables way before you do (you are fighting the computer, after all).

So here’s a breakdown of what your average battle will consist of:

In fact, some battles are multi-tiered and you can’t leave. You can go to the menu, but if you accidentally click out, you’re fucked. You can save, but if you don’t use up more than two saves, you are also fucked. In fact, one three-level battle is so tough at the end of Chapter 3, you will likely have to start the game all over and spend the entire game prior preparing for it just to get through it. It really is that insane. 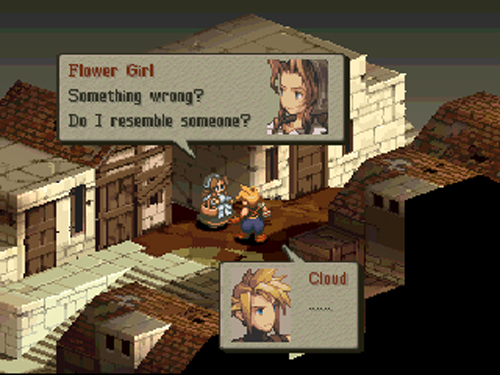 And what really pisses you off (or me, since I’m pretty sure I turned you off to the experience altogether at this point) is that so much of it could’ve been avoided. This game is as arbitrary as a Mideast religion. The world map is the biggest offender here, sprouting dozens of towns, battle spots and other dots that have no use whatsoever; you rarely can get from Point A to Point B without getting hit by a random encounter and soaking in 20 more minutes of battle. Try changing your job class and then realizing the nearest town that has heavy armor is way on the other side of the world, then realizing there are eight battle dots to get through, six of which you’ll fight and cannot escape from, and then when you finally get there, you realize it’s the wrong town.

And that’s what you’ll be doing if you try the Bar Quests, which you’ll need to if you want to be able to afford anything.

So from start to finish, first time through…you’ll clock in 144:56 hours (double that so it’s accurate with how much time you’ll actually spend on the game), if you get through at all.

And honestly, that would be enough to shut the door on this game, yet it’s been re- and re-re-released and is considered a PS1 classic.

Why? Don’t people know what real suffering is? Is everyone secretly a chubby chaser with a 600-pound girlfriend in the closet? Is life just so terrible that by now people have developed spiritual callouses and can no longer tell the difference between pain and pleasure?

Well, fact is, even with all that shit above—Final Fantasy Tactics is still fucking awesome.

With an incredible soundtrack, gorgeous animation and classic Squaresoft touches, this game ranks among Secret of Mana, Chrono Trigger, FFIV and FFVI and just has that “feeling” you get that makes you know it’s a classic. Not only that, but with the insane difficulty and dark, twisted story that you will never in your life make sense of, this game is also the first of those gems that truly feels like an adult game and is genuinely “badass”.

If this game were somehow taken down to a medium difficulty and only arbitrary to the point of a British Prime Minister, then you would never need to play another strategy RPG as long as you live, but these flaws are enormous and still degrade the funability of the title.

Therefore, I judge a 6 to be accurate, and let us never speak of this game again.

—Who can guess how long it took me to beat this game the first time?

Video Valentines for the gamer geek in your life.