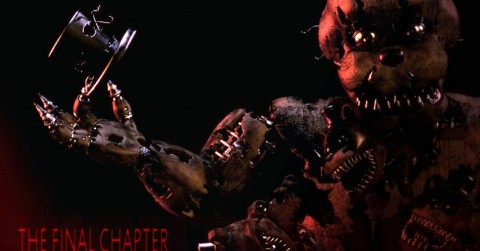 Attached above is an image taken from the developer’s main site. Just looking at the poster can confirm a few things. “The Final Chapter” is a dead giveaway that this, in fact, will be the final game in the series. But what exactly can the developer add in to deliver a truly awe-inspiring performance? Perhaps the very dim appearance of the word “NIGHTMARE” at the bottom is a dead giveaway, but what could all this mean? Let’s take a look at the animatronic and maybe that will help spell it out.

Looking at the face and top hat, it’s certain that this is Freddy. Unfortunately for us, Freddy looks like he had seen many, many better days. Taking the nightmare into effect, the scattered faces and mouths on the animatronic definitely give it a bone-chilling appearance. Not only that, but its claws and teeth are made with sharp points, unlike with previous models. Let’s forget about the image of the kids’ favorite teddy bear. This thing is a grizzly bear from hell.

For the past three installments in this series, our mentally unstable hero stood still in his security room, awaiting his looming demise. There has been no sign of him moving or fleeing from the dangers. I’m certain he would win in a game of chicken, I’ll give him that. But what if for the final installment, the player was allowed to roam the halls of the establishment? There is a huge difference between facing danger and not having the ability to prevent it, and being able to run and avoid the danger. Would it seem more off-putting if you were able to run around the halls, only to find yourself unable to escape the building, or even the animatronic for that matter?

Considering this is only the first piece of evidence we have on the fourth installment, it already has given us a lot to think about, as well as worry about. Many fans of the series doubted that a third installment was necessary, so a lot of people will, without a doubt, be denying the need for a fourth game. In order to sell this final installment, Scott needs to do something completely different with the game engine, to make it different from the first three games. Regardless of what happens until Halloween this year, make sure to bring an extra pair of pants with you. This game may very well scare the crap out of you.

Why do all the best games never get finished?!