I went to the movie theater today, and I realized that “3D” stands for “3 Dollars,” because that’s how much extra you have to pay for the glasses, if you think “3” means “6.” I also realized that you can show up fifteen minutes late to the movies and not miss anything, because they have so many previews nowadays. In certain cases, the previews are longer than the actual movie.

One of the previews that was shown was for Professor Layton 3DS: Whoot, Here It Is. It’s the third game in the Professor Layton series, and as you can tell by its title, it’s being released exclusively for the Nintendo 3DS on September 20th, several months before the 3DS is even released. How is this possible? It’s because Professor Layton is going to have adventures with time travel!

The plot of the game is that someone has invented a time machine, and given it the rather uncreative name “Time Machine.” At the machine’s grand unveiling, the inventor and the British Prime Minister get sucked inside the machine and disappear. OH NO! 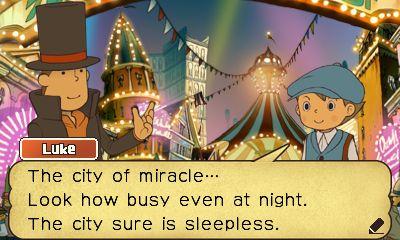 A non-fabricated screenshot of the 3DS Professor Layton game. I think they need to put more work into their translations.

Losing their Prime Minister ends up being the worst disaster to hit Britain since the time King Henry VIII set all the Catholic cathedrals on fire and made himself the pope of Bogus Religion #7.  With Prime Minister Crumpets out of the way, Britain has no choice but to give the job to GameCola writer Matt Jonas. Matt abuses his power and forces everyone in the country to buy a copy of Dora the Explorer: Swiper’s Big Adventure. Widespread riots immediately occur, and the death count is in the zeros. Naturally, it’s up to Layton and his friends to save Britain from this horrible future.

At least, that’s the plot of the game as far as I could tell from the preview. The preview was only three minutes long, and it was mostly screenshots from Putt-Putt Travels Through Time, aka GameCola’s Game of the Year for 1943. Odds are they might change a thing or two before the game’s official release.

“When will the other three Layton games make their way out of Japan?” you ask. I dunno. Ask Prime Minister Jonas.

Smash Hits—or Worst...I mean, Greatest Hits, everywhere outside of the U.S.—is another in a long string of Guitar Hero titles (such as the already reviewed Guitar Hero: Drama Queens and Band Hero: