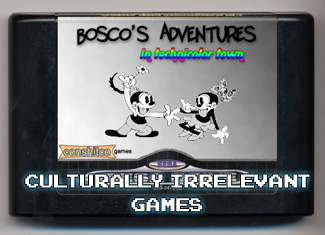 It’s an unfortunate fact of life that, any time a hit (typically sci-fi or family) movie is released, a videogame adaptation won’t be far behind. However, there are rare times when game companies, desperate for ideas, work with licenses that nobody has cared a damn about for decades.  These are just a few of the results.

First popularized in 1920s comics and radio dramas, Buck Rogers is back. But grab your 20D, nerdbombers, because this ain’t your grandpappy’s Buck Rogers—it’s much, much nerdier.

In this game, you create a party of six adventurers and traipse around a generic sci-fi setting, occasionally getting into turn-based fights with an emphasis on tactics.

Characters move like someone doing the robot in a strobe light—choppy and slow.

Though its tactics-based battle system isn’t bad, this game lacks polish of any kind. Presumably, the game’s developers knew the only people who would care enough to buy this game were the same dorks playing the Buck Rogers LARPs that were available at the same time, so they didn’t bother expending too much effort.

Like Buck Rogers, Felix‘s roots can also be traced back to the 1920s and, for reasons unknown, he was also was made into a modern videogame around the same time the Sega Genesis Buck Rogers game came out.

Truth be told, this is actually a pretty good game. You play as Felix and collect little Felix-head emblems to gain power-ups, healing items and 1-ups while you’re avoiding enemies. It’s a basic platformer, but the game actually pulls it off well. However, it’s really, really easy and seems to have been made with younger children in mind. Which leads me to wonder: Why would you base a young children’s videogame on a license that was out-dated when my parents were children?

Regardless, this game is actually worth picking up and giving a play if you’re looking for a platformer you can cruise through without thinking too much.

Hold on, I know what you’re thinking: “Fuck you! Mission Impossible is too culturally relevant! Tom Cruise has been schlepping those movies out every few years since the mid-90s!”

You’d be right if I was talking about the N64 Mission Impossible game, but I’m not. I’m talking about the rip-your-goddamned-hair-out hard NES M:I game that was made years after the series had ended and a few years before those crappy movies were made.

I’m going to let you in on a little “Top of the Heap” secret: I don’t play all the way through all these games, and I don’t read their manuals. In this case I actually broke and read the manual after sitting around getting shot, hit by cars and arrested by helicopters for a half hour. After reading the manual, I realized that I still didn’t know what the hell I was doing and decided that the game must suffer for this reason. So I gave it a lame score even though it might be a good game if I sat around and figured it out. Now that’s the mark of a dedicated game journalist.

Tom and Jerry: War of the Whiskers (GCN)

With the fighting game market dominated by the ultra-violent (Mortal Kombat) and the scantily clad (DOA), War of the Whiskers offers a fighting game that the kids can get in on. Unfortunately, it’s based on a license that kids haven’t given really a shit about in decades. 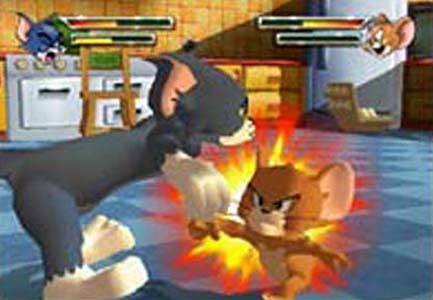 This fighting game brings very little to the table other than a stale license and well-worn gameplay. Although, even if it is a bit dull, surprisingly enough, I wouldn’t go as far as to call the game terrible. Fun…not so much, but it isn’t terrible, and because of that this game far exceeded my expectations. If you’ve got kids and you don’t want them playing stuff with blood and boobies, and you can convince them that Tom and Jerry were really cool in the ’40s, then maybe you can pawn this off on your kid.

When you think of a Lone Ranger videogame you may think “mindless shooter”. This actually isn’t the case. The Lone Ranger puts a lot on its plate: RPG, shooter, platformer, and it’s even got primitive first-person shooter parts you can play with the NES Zapper. Even more surprising is that it does all of these things pretty well!

The game is kind of like a combination of Zelda II, Castlevania, Hogan’s Alley, Ikari Warriors, Friday the 13th, and Star Tropics. That’s quite a combination and sounds like very high praise, and it is, but it should be mentioned that The Lone Ranger doesn’t play any better than any of these games that it is similar to except for maybe Friday the 13th and Hogan’s Alley.

Well worth picking up if you feel like playing a novel and challenging game.

That’s all there is for this out-of-date heap.

The top of this well-aged heap is:

It’s a tie! Felix the Cat & The Lone Ranger

It’s a halcyon day for “Top of the Heap”. Not only did no games get below a 3 this time around, but two even got above a 5 and tied at exactly 6.08 each. Rather than extending the rating system out a decimal place to decide a winner, I’m giving the coveted “Top of the Heap” Bowling Trophy Gif to both games. Felix the Cat does Platforming games for younger players as well as The Lone Ranger does the more difficult 1,000-genres-at-once game.

My friends, it's sad for me to say that, as of this publication, my dear editor, Paul Franzen, has written me off as mentally insane. When I told him I would write a review for Apollo Justice: Ace Att