You might not have heard about Okami, a PS2 game that was popular in some gaming circles, and in fact, was voted #30 on GameCola’s official top 50 videogames list. Fans have been hoping for a sequel for a while, but all they got was a Wii version of the game which is so terrible that I have a hard time believing that any incarnation of this game deserves to be on the top 50 list.

Now Okami fans have reason to rejoice, for the official sequel to Okami is being released on the Nintendo DS in Japan next month. The title is Okamiden: We Don’t Know How to Pronounce It, Either. Instead of starring Sun Wolf and Weird Talking Bug Buddy, it stars Baby Wolf and Japanese Girl Buddy. 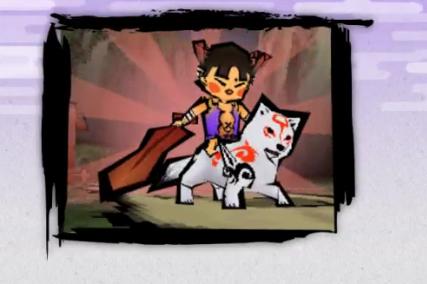 Japanese Girl Buddy, who I’m pretty sure is called Midna, rides around on the wolf’s back as he goes around the world and defeats evil bad guys. Of course, Wolf Buddy, whose real name is long and hard to pronounce, has magical art powers and can make things appear by drawing them. For example, by using the DS touch screen, you can rub the stylus over a half-complete bridge to have Wolf Buddy draw the rest of the bridge in place. It’s just like the Frankendoodle episode of SpongeBob!

The Japanese release of this game can be purchased as part of a Special Edition, which contains a CD, a “Making Of” DVD, a set of wolf pawprint headphones, a plush keychain, a book, an art brush like the one in the game, a copy of the game, and a special box to hold it all in. There has been no official word from Capcom yet, but rumors are that the American release will also contain bonus material, such as a manual. The game is expected to appear in non-Japanese countries sometime in 2011.