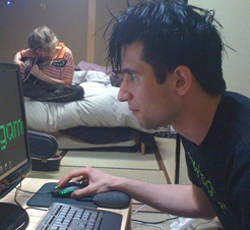 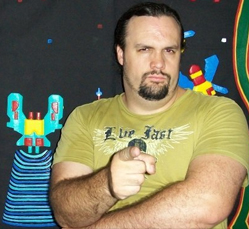 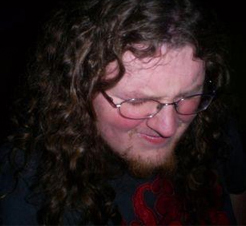 Robert Pelloni is an independent videogame developer and the creator of Bob’s Game, a 2D EarthBound-inspired RPG, which he’s spent over five years and 15,000 hours developing. The game was originally planned for release on the DS, but then stuff happened. This is Robert’s first appearance in “Versus Mode.”

Patrick Scott Patterson is a Division Manager with Twin Galaxies, an organization that tracks videogame and pinball world records. He currently holds all-time world records in such games as Super Mario Bros. and the Madden NFL series. He’s also a writer for Examiner.com and GameRoom Magazine, and he’s a former professional wrestler, during which time he was known as “Hardcore Kingpin” Scott Phoenix. This is Patrick’s first appearance in “Versus Mode.”

Colin Greenhalgh is a 3D Artist with Budcat Creations, a videogame developer whose work includes Our House: Party!, Blast Works: Build, Trade, Destroy, and the PS2 versions of several Hero games, including Band Hero,Guitar Hero 5, and Guitar Hero: World Tour. He is also a current GameCola staff member, and he regularly appears on The GameCola Podcast, writes reviews, assists with the ongoing development of our website, and draws pretty graphics for us, including our logo. This is Colin’s fifth appearance in “Versus Mode,” having written previously with Alex Jedraszczak, Adam Ryland,  Meteo Xavier, and in NewbieMania.

[Editor’s note: We’re trying something different with “Versus Mode” this month. Instead of having two people discuss all five topics, we’re having three people discuss 3-4 topics each. Let us know in the comments section if you like it, or if you think it’s too confusing, or if you have any other thoughts on it.]

1. Blizzard should not have caved on Real ID.

Robert Pelloni: I can understand that some people have careers and identities to protect, and perhaps even secret gaming addictions to hide from their spouses and families, so I think not all forums should require real names. Specifically regarding World of Warcraft, though, I think it’s a good thing to require real names, and I don’t think they should have backed down. Perhaps this would have forced some players to resign from the service in shame, and then they could get on with their lives. Probably makes better business sense for Blizzard to keep it anonymous, though.

Colin Greenhalgh: Blizzard pussed out, and that’s sad. It’s not the end of the world. It really was over hyped and made to be controversial by whiny Internet bitches. Revealing true identities on the WoW community forum would probably not have brought about any amazing world changes or corrected the attitude of the Internet, but I will tell you why, in my opinion, the idea of a global personal identity is important, whether it starts in the world’s most popular MMO’s forums or somewhere else. 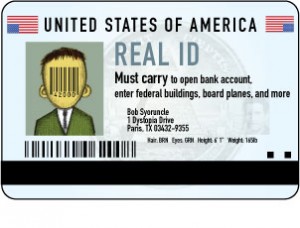 I would like to think that people are, in general, well-rounded, sensible, and able to interact with one another on a personal level and develop a friendly rapport. Of course, this CAN be done with a moniker or through an avatar, which are only extensions of who we want to be. On the other hand, there’s the dicks (literal) on Chatroulette, the trolls and asshats, the griefers, and the drunk with power. These people are all granted the ability to exist through the anonymity of the Internet. We accept this. We have given up trying to prevent these very negative identities, which in turn allows them to breed and fester. I, personally, feel that attaching a global identity to these people could be the simplest, most effective way of preventing them from doing what they do. If you are who you are, everywhere, you will be known. If someone exposes their junk to strangers in the real world, they have a tangible identity and could easily be arrested. As for the Internet, we’re somehow OK with it. And don’t get me wrong, I have no problem with specific places where you are allowed your anonymity, but perhaps there are places where you should be held responsible for your actions as the human being that you are, not just the digital identity you hide behind.

It all becomes a bit complicated and convoluted and I don’t have a PERFECT answer to how it should work. I just think that taking steps in the direction of creating a more trusting, understanding, and compassionate Internet society couldn’t possibly be a bad thing.

Bad things could happen from it (if that’s your reason for not wanting Real IDs), but bad things happen ANYWAY. We shouldn’t be afraid of people getting a hold of our names and being able to harass us at our homes anymore than we are afraid of that in the real world. We should be fostering communities with people we respect and trust enough to protect ourselves and our friends and shun the (I’d like to think) few that are trouble.

I feel like this response is hasty and rushed and not how I want to say the things that I want to say, but my point mainly is: I should be held responsible for my actions and so should you; it’s the only way we can progress as a society, both in the real world and online.

If you’d like to discuss this more, please, feel free to comment or e-mail me at colingreenhalgh@gmail.com (which is my real name *gasp/shock*).

2. It’s time for World of Warcraft to go free-to-play.

Robert Pelloni: World of Warcraft needs to disappear! I don’t like the idea of the “never-ending game that goes nowhere,” and I don’t think it’s a fair or respectable business practice, knowing they design the things to be addictive. They should just end it already, come out with an update that includes an actual final boss and some huge cinematic sequence and ending credits, and then just delete the accounts afterwards. Set all the players free to play some other games! Or maybe they could total conversion the whole thing into World of Starcraft all of a sudden, and piss everyone off. I’d love to see them do something interesting with it instead of just milking it until its eventual slow death.

Patrick Scott Patterson: Warcraft deserves a ton of credit for managing what it has and gaining the following it has. At this point, though, I have to think it’s become big enough to make its money off of product placement, advertising, etc. rather than a subscription. Then I might actually finally try it.

Robert Pelloni: I think they’ll make something cooler with the same tech 🙂 Those Microsoft guys don’t just throw away IP; they rehash them for decades under new brands. I think we’ll see something come of this eventually! 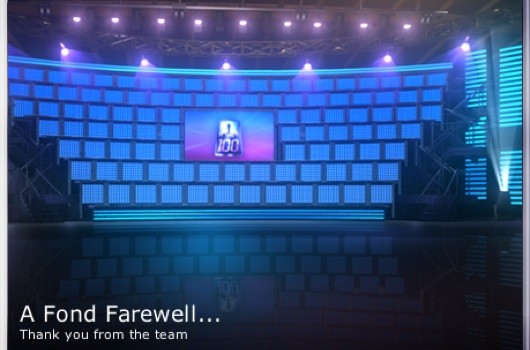 Patrick Scott Patterson: I was crushed to hear of the cancellation of 1 vs. 100, a concept I’ve liked since I first saw it at an Xbox Live party at E3 2009, and played when it was available. I think the concept and development of such games adds to the community and should be expanded to other types of games, not squashed before it’s had proper chance to flourish.

4. Nobody would miss rumble if we didn’t have it anymore.

Robert Pelloni: I won’t miss the pathetic vibrate function in current controllers. Instead, I think it should be replaced with a violent shaking capability similar to using a jackhammer. As it is, rumble doesn’t provide much immersion, but imagine your hands going numb and gripping the controller for dear life. That’s how rumble should be!

Colin Greenhalgh: We still have rumble? I kid. I think rumble is a really under-appreciated design element. I understand it often has to be optional (you can disable it to preserve battery on wireless controllers most of the time, I believe?), but it’s very nice to have as just a little tertiary, tactile response to a lot of things. I hate when it’s overused and extreme, but it’s particularly helpful in situations like the Kinect, Move, or Wii-mote in UI design. With a standard controller, it’s easy to see what button’s highlighted, and it’s clear which direction I need to press to go to the option I want. With the Wii-mote…I’m pointing at the screen, and sometimes it may not be clear that what I’m pointing at is even a button. It has to highlight and animate and all the same stuff a regular button does with a controller, but it’s also nice to have a little rumble when my cursor crosses into that button threshold. It gives me physical feedback that I have now aimed at a button. I think you’d definitely notice it not being there in a game where you don’t have direct control via buttons over where your cursor is.

Patrick Scott Patterson: I’m not sure I agree with this. Mario, Link, etc….they are timeless. Saying Nintendo needs new characters would be like Disney saying

that. What Nintendo needs to do is give us more dynamics on the characters we all know but hardly see.

Colin Greenhalgh: Well, based on the question, no. Nintendo doesn’t NEED new characters; it could get by just fine with what it’s doling out now. It does need a console that’s not terrible to develop for, that’s not holding back the industry, that has a method of control other than the incredibly inaccurate waggle of a Wii-mote, but that’s a different question. Would it be awesome to see new Nintendo characters? Shit yeah! I appreciate the idea of quirky, cartoon Japanese characters that aren’t just anime. Pikmin’s design was amazing, combining a very classic Japanese cartoon look with some very attractive, modern environments. I would love to see what comes out of some of their brilliant heads, despite how much I love their classic stable of characters.

To read more articles by Patrick Scott Patterson or to learn more about his past and upcoming attempts at videogame world records, check out his official home page here.

This time in Localization Anxiety, another game TOTALLY NOT about high schoolers beating each other during a sports competition!