For nearly 200 years, our state was known for one thing: a bunch of rocks that looked kind of like a face. Well, two things, if you include rampant bestiality, but only one thing you’d mention in polite conversation. In 2003, however, those rocks finally collapsed, leaving us with nothing of note aside from the hometown of Adam Sandler. It is now 2010, and our road signs, commemorative coins and even my license plates still have the Old Man of the Mountain adorning them. 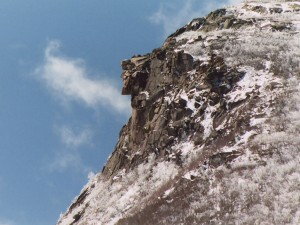 And all it took to keep it looking like that was 100 years of ropes, chains, clamps and nets holding it in place. Truly a natural marvel.

It’s time that we stop being called “that podunk, upside-down-Vermont state that pathetically clings to its old state symbol, which wasn’t very good in the first place” (everyone calls us that) and start positioning ourselves as go-getters.

New Hampshire resident Ralph Baer was working at a defense contractor in Nashua, NH when he developed the technology that later became the Magnavox Odyssey: the first home videogame system.

Not good enough for you? Fine. How about the world’s largest arcade?

This sign plays a key part in dispelling the myth that Funspot has curbside skee ball service.

Believe it or not, it’s not in Japan or Dubai; it’s in the middle of nowhere in Weirs, NH. Funspot is home to hundreds of arcade games, skee ball, eateries, a bar, two bowling alleys (one regular and one candlepin for New Englanders), virtual golf, bingo halls, and the American Classic Arcade Museum, and it holds a Guiness World Record for being the world’s largest arcade. Whether you want to play Dig Dug while listening to Dexy’s Midnight Runners or win the Jackpot on a ticket redemption machine in front of a 6-year-old girl who is very angry at you for taking away the jackpot she desperately wanted to win (true story), Funspot is a nerd Mecca.

Of course, New Hampshire is also home to the world’s finest videogame journalist in the history of all mankind, Christian C. Porter.  Also, you can get your hair cut by my friend, Keith (pictured below), who is a licensed barber and is more than willing to carve Nintendo characters into your head as he has into his own. 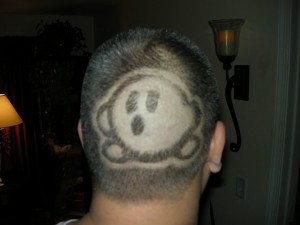 Surely you trust your hair to this man.

So, New Hampshire, I hope you’ll do the right thing and start putting our state forward as a land of technological breakthroughs and not just a place where old people can come look at trees and experience geologic pareidolia.