This game makes me want to make a Queer Eye for the Straight Guy joke, but nothing tangible (sane) comes to mind…

Anyway, for years and years, I used to see all kinds of references and aftermarket word-of-mouth marketing and additional miscellaneous praise for EarthBound—a game I had never played, never seen in Tennessee, and of whose association I only have from a very torn up Nintendo Power I got upstairs. This was the “late” SNES period that had a comfortable futuristic feeling to it but felt rather sterile. Efficient and awesome, but cold and not very broadening. I remember that during this period I used to be obsessed with how games were getting somewhat “blue“, making fart jokes and using mild profanity. My dad about popped his hemorrhoids in response to the filth videogames were perpetrating on his young, masturbating sons. Father lacked reality. Maybe he was just out of touch with the world, or maybe he was a jacked-off, jacked-up super crazypants as was stated on his driver’s license, but the man truly did not take to videogames farting, and so EarthBound went forever undiscovered. 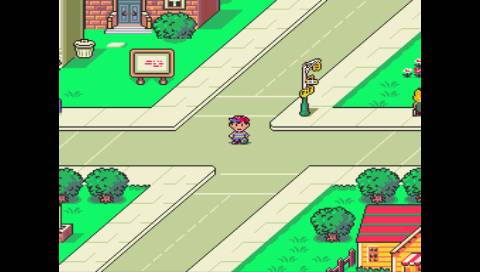 For a few seconds, I thought I had grabbed a Paperboy 2 screenshot by mistake. I was going to post it either way…

And like many other games I eventually really found a groove in, I ended up owning EarthBound for a couple years before I ever actually played it. A store that is now a GameStop (which, despite being clean and relatively reputable, always smells like body-ass and Febreze) (maybe someone drank it and farted religiously or something) sold me a grand slam of Dragon Warriors III, IV and EarthBound. $100 for all three. Man what a trade, but of them, EarthBound was the only one I didn’t play at the time, and I finally started it two years ago on Thanksgiving.

There was an irony to it that I haven’t quite figured out yet, but basically I got two famous Dragon Warriors and their parody game. I was relatively familiar with EarthBound already, but I still wasn’t really prepped for this.

The cult(ural) impact of this game is not lost on me; even after three playthroughs it still really lives up to its hype with a constantly fresh approach, and I can see why people on forums cry “Mooo-ooo-ooonnnsiiiiiideeeee” unprovoked as if a diabetic Andy Kaufmann slipped into their skins and started transmitting cryptic messages from the Malebolge on a crystal meth bender. Truly this is a game that assaulted an otherwise cold and imbroad market with a ruthless cluster of all the silliness and wild creativity that was missing in every title on the scene at the time.

Seriously, if it hasn’t been stated enough for you, listen to me good: This is the weirdest fucking game in American history. While all other rabid fans (no doubt sprouting mushrooms out of their heads) are still mourning the loss of the opportunity to have cart-ready editions of Mother and Mother 3 in their collections, I thank the Good God above that we only got this one! I actually found a lot of the weirdness overpowering (even for me!), and I think the other two would’ve killed the charm and unique allure of EarthBound.

And apart from being weird, I really have no clue what this game truly excels at or what its real grab is. The battle system is simple and efficient, but it’s very basic in a lot of ways and, after some chapters, gets old quick. The world maps are creative and attractive, but that can’t be it. The soundtrack is…wow. I bet half the people who ever played this game put it on mute. It’s even more avant-garde than the game itself—owing much to the compositional styles of “Hip” Tanaka who, after listening to the soundtrack, I’m convinced is not a physical person but a phenomenon that occasionally strikes random Japanese people and possesses them to attempt total world anarchy through compositional forms and Malebogian modes. It’s definitely not the shitty inventory system, which is so bad it makes a huge impact on the game’s flow, and you are constantly asked to stop and do something with an inventory loaded with crap you’re really not sure if you even need right now or upcoming. It might be the story, but good luck trying to figure it out the first time through.

It must be the script. It’s hard to believe a script like this could have come out of translators, even in 1995. It must’ve been rewritten by some sort of anti-polar set of Eric Idle/David Lynch Siamese twins. The story may be hard to figure out, but the plot is certainly a smooth sail through some of the best scenarios ever planned in a videogame. Wonder what “Moonside” is and why it’s so popular? Oh, you’ll find out, my friend. Too bad they didn’t bother in their creativity to make it easier to decipher how to get through some of the plot points, but yeah, man, this game has some of the best actual “stuff” to do you’ll ever see.

Because I missed so much of the genesis of the fanbase surrounding EarthBound, though, it still comes off like a fun but thinly-veiled Dragon Warrior for Kids game. It’s almost too much of a parody. There’s a lot of great stuff in here to be sure, but there’s a lot of potholes as well. The inventory system and some generally unnecessary nonlinearity around the middle of the game make progressing through it difficult at times.

I can’t come up with any more material to stretch here. Let’s give it a number and call it good.

Golf Story isn't super unique as a game outside of being a golf-based action RPG, but it's writing character is a shot above the rest.