I’m not a fan of the current 3D movie craze, to be honest. I think it’s kind of dumb to pay extra money for fake 3D that tends to hurt your eyes. Besides, the movie theaters near my house all use outdated technology like “film reels” and “projector screens,” instead of Super Digital Plasma HD 3D Blu-Ray BUY BUY BUY Quality flatscreens, so the 3D effect isn’t as good as it should be.

Therefore, I am hesitant about Nintendo jumping on the 3D train to bring us all the 3DS. I know that all the reviews so far say that the 3D works great/perfectly/better than the U.S. economy. But, as Mr. President of Nintendo said multiple times during their press conference, they can’t show us any pictures of it. And that makes me slightly suspicious and/or confused. Why can’t they show pictures of the 3DS in action? Is it because the device is unfinished? Or is it just for technical reasons, because it doesn’t work on non-3D projectors? If so, why didn’t they say the 3D effects couldn’t be shown for technical reasons? I dunno, I just find it weird that Nintendo openly said they couldn’t show pictures of the 3DS in action, but they never clarified why.

We know that the 3DS comes with a slider (in the lower-left?) that controls the 3D effect. You can turn it on full or you can turn it off completely. My guess is that the slider controls the depth of the 3D projection. Say, the full 3D effect is four inches. Turning the slider to halfway makes it project two inches. Turning it off will make it project a really short distance, like a millimeter, so it looks like the effect is off, even though it’s not. 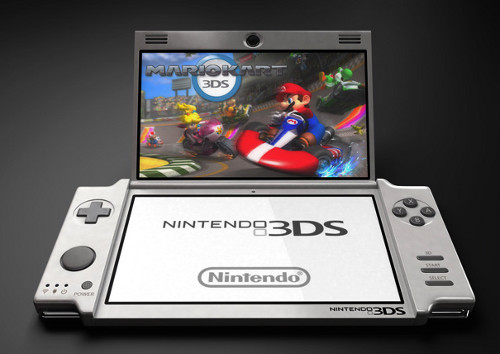 I’m trying to think of a situation where 3D effects would be absolutely necessary to gameplay, but I can’t think of any so far. Oh well.

And finally, to ask a question I’ve heard no one else ask, can the 3D effect of the 3DS hurt your eyes? I’m thinking the answer is “yes.” Kids (and adults) already hurt their eyes by playing videogames for too many hours in a row. The 3D effect might aggravate this problem.

In conclusion, I’m not sure about the 3D part of the 3DS. The other things about the 3DS—like video capabilities and an Internet browser that works well—sound pretty good, though.

Hey Paul, First, you're a punk.  But besides that, kudos to the revamped site.  I like the colors, the scroller, and the staff section.  Speaking of which, since Jenna is the self-proclaimed Mortal