I proudly admit to being a casual gamer. I’ve never pretended to be otherwise. My standard M.O. is to play a little bit, and then go do something else. A large part of this preference is due to my general lack of interest in many of the games that are out there. Shooters and war games and car races and Pokémon Snap just don’t really do it for me. Granted, I have become more willing to try new games in recent years on account of my boyfriend, but really, there are only a handful of games that I truly enjoy playing.

It was only recently that it occurred to me that my casual gaming habits might also be an act of self-preservation. This revelation came about after a 12-hour stint at playing Kingdom Hearts II. Yes, that’s right. You heard me. Twelve hours. Twelve freaking hours. I had a whole Saturday all to myself and I only managed to tear myself away from the goddamned TV when my stomach reminded me that it was time to seek nourishment. For the rest of the day, I just shifted from one couch to the other as I played through Atlantica, and Halloween Town, and the great showdown at Hollow Bastion (I beat 1,000 Heartless!). My boyfriend, who was spending the day at 32-Bit Genocide (those of you who don’t know what that is should be ashamed of yourselves for not keeping up with the GameCola blog), would call occasionally to check in, but the only things I really had to say were: “Uh huh, baby, that’s nice. I’m having trouble beating this boss and there’s a time limit, and I really fucking hate time limits and it’s really frustrating! Oh right, how was the concert?” 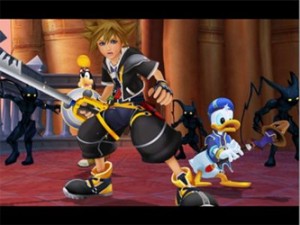 The gaming went on, and on, and on. I was still playing by 11:30 p.m., showing no signs of slowing down. And then, an odd thing happened. I stopped. I was in the middle of playing the Olympic Coliseum level and I just decided that I wasn’t having fun any more. I no longer felt like playing. And so I put the controller down and went to read a book.

It’s been two weeks, and I have yet to feel the desire to pick that controller up again. My boyfriend has spent the interim time leveling up Sora, Donald, and Goofy, so that when I do actually want to play, my characters will be as strong as possible. But other than a brief stint playing the Agrabah level, which I only played because my boyfriend suggested it, and which I didn’t particularly enjoy, I have just not wanted to be anywhere near the game. This is annoying, because I’m still actually interested in the game’s story. I have a vested interest in knowing whether Kairi manages to escape from Organization XIII and if the hooded figure following Sora around is, in fact, Riku. I want to know. Really, I do. I just can’t play the actual game.

I’m trying to figure out what caused the sudden need for withdrawal, and the truth is, I think I just overdosed. I did too much in one stretch, maxed out my mental capacity, and completely destroyed that sense of fun that had not only kept me playing until that point, but had in fact induced me to pick up Kingdom Hearts II in the first place within hours of finishing the original Kingdom Hearts. I played through four hours of freaking Roxas and it wasn’t this bad! I mean, really.

Now, this kind of overdose has happened to me before with other games, albeit rarely, and I’m hoping it doesn’t end up becoming a habit. The last time I can remember overdosing on a game was when I went through my Animal Crossing: Wild World phase, which occurred shortly after I was given my Pink DS. I played that game every day for weeks, checking things, exploring, gathering items, trying to grow the goddamn red turnip so I could get a golden axe, and then one day, I was just…done. I’m a little worried that Kingdom Hearts II will end up the same way. I hate to think that I have truly killed the game so much that I never want to play it again. That would be sad.

My boyfriend says that he’s proud of me for having played through my “first ever gaming marathon.” I’m guessing it’s a rite of passage among hardcore gamers. Still, I think it would be best for everyone if I avoided such “marathons” in favor of shorter races. After all, I think we can all agree that gaming is supposed to be a fun activity. And like all fun things, it may be best in moderation.