Ah, so yeah. Comic-Con was nearly a month ago, and I intended to report back on all the gaming goodness mixed in amidst the non-stop nerdrage-fueled eye-gougings. Unfortunately, this being my first time in attendance, I was not prepared to deal with the swarm which descended upon the convention center, and ended up missing out on most of the demo stations. But I persisted in my duty: while the other con-goers were occupied with the likes of Dead Rising 2 or Marvel Vs. Capcom 3, I discovered a mysteriously ignored demo station for Kidz Bop Dance Party. 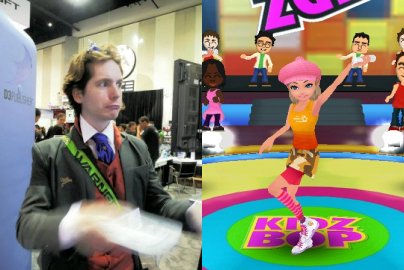 Scandalous wench! This is not fit and proper for the eyes of children!

Giving up on the demo stations, I took a look at the list of gaming-related panels. Comics and Video Games sounded promising and particularly relevant, given the venue. I was hoping to hear some in-depth discussion on the links between comic culture and gaming culture, or perhaps on the rise of gaming-related webcomics, or announcements of unique and unexpected projects. Alas, it turned out to be nothing but Big Comic Publishers and Big Videogame Publishers answering every question with some variation of “We’re really trying to stay true to the world of Mass Effect/Fallout/Dragon Age/Painfully Unsurprising Mega Blockbuster Hit.” When the moderator asked the audience about games we’d like to see make the transition to comic format, I raised my hand to shout “TETRIS” but sadly was not called upon. Dismayed, I left the panel early.

I walked the floor some more, and this time I turned up a few things of note: 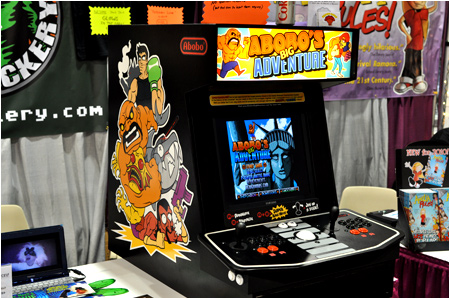 Years ago, I won a copy of the Captain N DVD boxset in a contest over at I-Mockery.com, so I wanted to make sure to check out their booth. And what a booth it was! Visitors had the opportunity to play the upcoming Flash game Abobo’s Big Adventure on an actual arcade cabinet. The bit I observed involved the titular Double Dragon baddie eating the heads of his enemies and using their bodies as weapons, so I’m pretty much sold. I walked away from the booth a happy man with an “Ultimate Retro Beach Party” Pixel Poster and a free pack of Dinosaurs Attack trading cards, c. 1988. 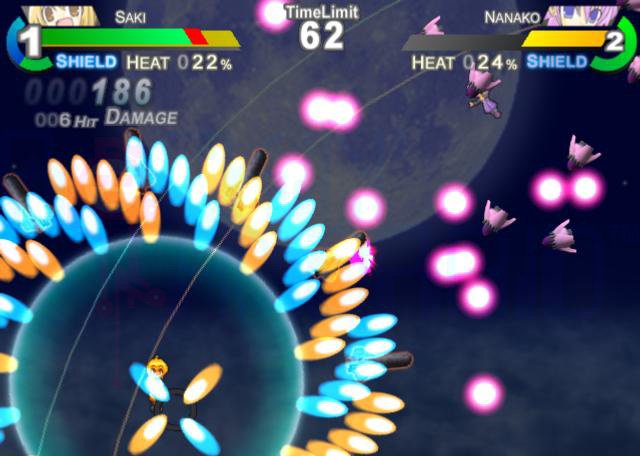 I stumbled upon the booth of indie publisher Rockin’ Android far in the back of the convention hall. They had a few different games on display, all of which appeared to be variations of the shmup. I played some Versus Mode of Suguri, which features 2D sprites and flying little girls and bullets and explosions and Japan. I liked what I saw and fully intended to come back and pick up at least one of their products, but at the end of the day realized that I had neglected to do so. Oops. Perhaps a plug here will make up for it.

3. Metroid: Other M at the Nintendo booth

The crowd at the Nintendo booth finally died down at the end of the day, and I was able to get close enough to see what all the fuss was about: a playable demo of Metroid: Other M. I captured a short clip of the game in action:

Hey, c’mon, there’s a week left before the game comes out, so this still counts as news! I’m moderately excited for this, since it looks a lot closer to what I’d always imagined a 3D Metroid game would be like…and yet I can’t help but think I’d prefer the mysteriously absent 2D Metroid for the DS which we never got. A shameful affair, that.

Well, those are the highlights, besides the pile of non-gaming-related swag I hauled home. I only had a one-day pass, and I’d recommend attending at least two days to see everything there is to see. Anything beyond that, and the risk of eye-gouging is simply too great.